Accessibility links
The Letters And Legacy Of Physicist Feynman Renee Montagne talks to Michelle Feynman, daughter of Nobel Prize-winning physicist Richard P. Feynman, who was just 24 when he began working on the atomic bomb with the Manhattan Project. A new collection of his letters, Perfectly Reasonable Deviations from the Beaten Track, was published recently.

Listen
The Letters And Legacy Of Physicist Feynman

Renee Montagne talks to Michelle Feynman, daughter of Nobel Prize-winning physicist Richard P. Feynman, who was just 24 when he began working on the atomic bomb with the Manhattan Project. A new collection of his letters, Perfectly Reasonable Deviations from the Beaten Track, was published recently.

A new postage stamp is out this week featuring one of the most colorful and charismatic men in the world of physics. Richard Feynman was just 24 when he began working on the atomic bomb with the Manhattan Project. He went on to win the Nobel Prize in physics in 1965. Before his death in 1988, Richard Feynman had so captured the public imagination, he got fan letters and poems inspired by his lectures. He often did science programs on TV, but his most dramatic appearance by far came during the 1986 hearings on the Challenger shuttle disaster. Michelle Feynman has just released a collection of her father's letters. She describes the simple demonstration that surprised the country.

Ms. MICHELLE FEYNMAN ("Perfectly Reasonable Deviations from the Beaten Track"): In the middle of the hearings, he was concerned that the O ring seal was not resilient after being exposed to the extreme temperatures of the launch day, and so he performed his own experiment in the hearings and asked for a glass of ice water. He took the seal and put it in a little clamp, which he had bought at the hardware store on his way to the hearings that morning, put the O ring in a clamp, dropped it in the ice water for a few minutes, took it out and presented the problem. The material was no longer as resilient after its exposure to the ice water.

MONTAGNE: And that was a kind of a jaw-dropping moment, if you were watching it as it happened.

Ms. FEYNMAN: Yeah. I mean, I think he definitely had a flair for the dramatic moment, and with his love of physical phenomenon and curiosity about the world, I mean, it kind of comes to a head with this moment.

MONTAGNE: Let's go back to, in a sense, the beginning of this book. The book is as much about who he was as a person, as a physicist, or a public person, and easily the most touching part of the book is where he is very young, married to his high school sweetheart who's dying of tuberculosis. When you read his letters, what did you know about his marriage to this young woman, Arlene?

Ms. FEYNMAN: Well, he met Arlene when they were about 14, and I knew that she had died just after a few years of marriage.

MONTAGNE: There was one letter that you describe as clearly something that's been read over and over again, that it's worn, it's almost hard to read, and it's...

Ms. FEYNMAN: Yes. It's the last letter that he wrote after her death.

MONTAGNE: A long time after.

Ms. FEYNMAN: Some 18 months after her death, yes. This is dated October 17th, 1946. `It is such a terribly long time since I last wrote to you, almost two years, but I know you'll excuse me because you understand how I am, stubborn and realistic, and I thought there was no sense in writing. But now I know, my darling wife, that it is right to do what I have delayed in doing and what I have done so much in the past. I want to tell you I love you. I want to love you. I will always love you.' And he signs it, `My darling wife, I do adore you. I love my wife. My wife is dead. Rich.'

MONTAGNE: He wrote a letter in July 1945 just a month after his wife, Arlene, had died, about his experience with the first atomic bomb, and its being tested. It's just an amazing description of the whole scene. How does he describe it?

Ms. FEYNMAN: There were three busloads of anxious scientists, and I guess one was so anxious that he was actually sick on the way and they had to pull over and wait while he was in the bushes for a bit, and--but then they finally got to the desert and dark glasses were distributed, and they sat and had a picnic, and they just didn't know if it would work. `I was blinded by a terrific silver-white flash. I had to look away. Wherever I looked, an enormous purple splotch appeared. It was just as bright when I closed my eyes. That, said my scientific brain to my befuddled one, is an after-image caused by looking at a bright light. It is not the bomb you were looking at. So I turned back to look at the bomb. The sky was lit up with a bright yellow light. The earth appeared white. The yellow gradually became darker, turning gradually to orange.'

MONTAGNE: He speaks about the green glass that's left behind when the sand...

MONTAGNE: When the sand melted. I'd never heard that description, and it was so strangely beautiful.

MONTAGNE: There's a series of letters that he wrote over about a decade where he tries to resign from the National Academy of Sciences.

Ms. FEYNMAN: Well, you know, he didn't like honors, and he saw this organization as being primarily honors based, and, you know, when he was informed that he had won the Nobel Prize, he actually asked a reporter if he could refuse it without making a fuss, you know. The reporter said no. But there's a chapter devoted to his responses to people who write in congratulating him.

MONTAGNE: Among those letters was one from his high school science teacher, and your father, he writes this charming letter back.

Ms. FEYNMAN: Yes. Let's see. He says to him, `Another thing that I remember as being very important to me was the time when you called me down after class and said, "You make too much noise in class." Then you went on to say that you understood the reason, that it was because the class was entirely too boring. Then you pulled out a book from behind you and said, "Here. You read this. Take this up to the back of the room, sit all alone and study this. When you know everything that's in it, you can talk again." It was very exciting for me to have you as a teacher in high school, and you certainly knew how to stretch a young boy's mind to the utmost of achievement. Thank you very much.'

MONTAGNE: Just lastly, do you have a favorite letter amongst all of these?

Ms. FEYNMAN: I do have a very soft spot for this letter about pine needle tea. He read an article in Science magazine about how pine needles were used to cure soldiers of scurvy hundreds of years ago. Pine needles are a good source of ascorbic acid or vitamin C. In a letter to his mother he wrote, `So, of course, I had to make pine needle tea. Result? Fair. Not too wonderful, not too bad. About as good as regular tea but different. Crush the pine needles up, pour on boiling water and allow it to steep a while. Serve hot or with ice and lemon. Cheap. Remarkable fact is it tastes like pine needles.'

I don't know how many people read an article and then say, `Oh, you know, that's something I have to do.' But this is just--this is typical of my father's curiosity.

MONTAGNE: Michelle Feynman, thanks for joining us.

Ms. FEYNMAN: Thank you very much. 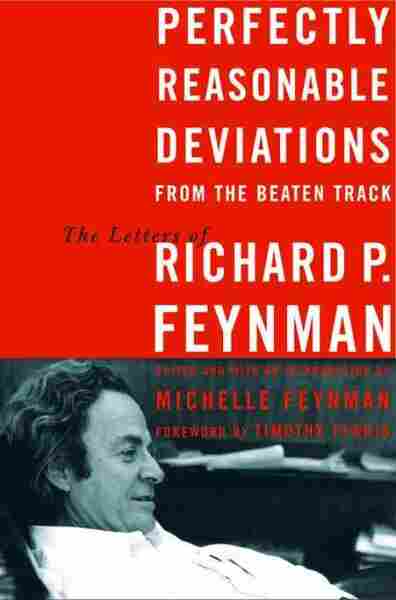 The Letters Of Richard P. Feynman