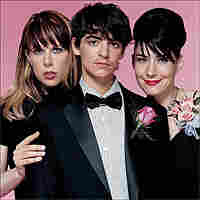 Le Tigre goes to the prom on the cover of its CD 'This Island.' Kathleen Hanna is on the right. hide caption

In the early 1990s, a singer from Olympia, Washington became a new kind of feminist icon. Kathleen Hanna was lead singer of the punk band Bikini Kill. She wrote lyrics about domestic violence and rape... and became a symbol of the "riot grrrl" movement.

Hanna's latest act, Le Tigre, is a long way from punk. The group uses digital samplers to quote sounds from the outside world, then manipulate them into dance beats.

For the series "Musicians in Their Own Words," Hanna says that even before she got her hands on a sampler, she was reworking familiar sounds to make a statement.