Accessibility links
How Is It Possible To Believe In God? In considering the glories of the world around him, writer and conservative commentator William F. Buckley, Jr. finds it easier to believe in a divine creator than in the vagaries of nature.

Listen
How Is It Possible To Believe In God? 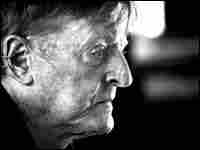 William F. Buckley, Jr. founded National Review magazine in 1955 and was its editor for many years. As a conservative commentator, he was the host of the long-running public television program Firing Line. Buckley is also the author of the acclaimed series of Blackford Oakes spy novels.

Revisit some of the year's most compelling stories and interviews. hide caption

I've always liked the exchange featuring the excited young Darwinian at the end of the 19th century. He said grandly to the elderly scholar, "How is it possible to believe in God?" The imperishable answer was, "I find it easier to believe in God than to believe that Hamlet was deduced from the molecular structure of a mutton chop."

That rhetorical bullet has everything — wit and profundity. It has more than once reminded me that skepticism about life and nature is most often expressed by those who take it for granted that belief is an indulgence of the superstitious — indeed their opiate, to quote a historical cosmologist most profoundly dead. Granted, that to look up at the stars comes close to compelling disbelief — how can such a chance arrangement be other than an elaboration — near infinite — of natural impulses? Yes, on the other hand, who is to say that the arrangement of the stars is more easily traceable to nature, than to nature's molder? What is the greater miracle: the raising of the dead man in Lazarus, or the mere existence of the man who died and of the witnesses who swore to his revival?

The skeptics get away with fixing the odds against the believer, mostly by pointing to phenomena which are only explainable — you see? — by the belief that there was a cause for them, always deducible. But how can one deduce the cause of Hamlet? Or of St. Matthew's Passion? What is the cause of inspiration?

This I believe: that it is intellectually easier to credit a divine intelligence than to submit dumbly to felicitous congeries about nature. As a child, I was struck by the short story. It told of a man at a bar who boasted of his rootlessness, derisively dismissing the jingoistic patrons to his left and to his right. But later in the evening, one man speaks an animadversion on a little principality in the Balkans and is met with the clenched fist of the man without a country, who would not endure this insult to the place where he was born.

So I believe that it is as likely that there should be a man without a country, as a world without a creator.