Accessibility links
Brinkley, Ark., Embraces 'The Lord God Bird' Something good recently happened to the town of Brinkley, Ark. The ivory-billed woodpecker, last seen in 1944, was rediscovered nearby. Independent radio producers Dan Collison and Elizabeth Meister and singer-songwriter Sufjan Stevens collaborate on a tribute to Brinkley and its rare bird.

A local artist's wooden cutout of the ivory-billed woodpecker graces a sign outside Penny's Hair Care in Brinkley. hide caption 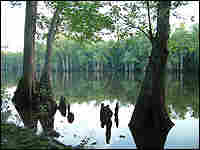 Near Bayou DeView, where the ivory-billed woodpecker has been spotted. hide caption 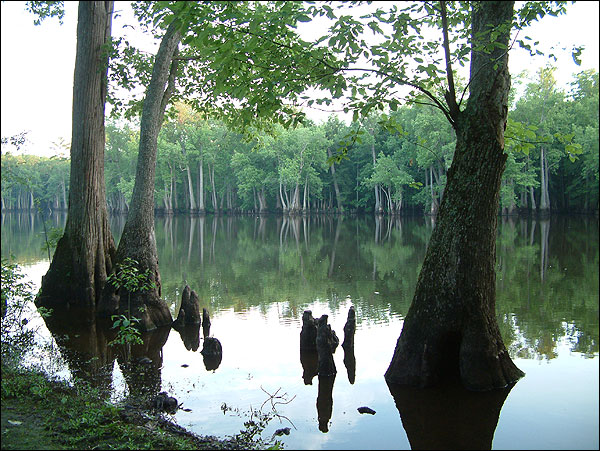 Near Bayou DeView, where the ivory-billed woodpecker has been spotted. 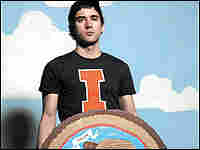 Sufjan Stevens hopes to release a record on every state in the Union. His latest is on Illinois. hide caption

Singer-songwriter Sufjan Stevens has a lofty goal: exploring each of the 50 states in song. He's already released a critically acclaimed full-length CD simply called Michigan. His latest honors the people, places and history of Illinois.

Independent radio producers Dan Collison and Elizabeth Meister were curious about how Stevens writes his songs, which, much like their own work, are filled with stories of places and people. So, they introduced Stevens to the Arkansas town of Brinkley.

Brinkley is a small farming town not far from where the ivory-billed woodpecker recently was rediscovered. News that the bird is not extinct has brought a ray of hope to the residents of Brinkley.

Producers Collison and Meister spoke with people in the town, then shared the interviews with Stevens. He wrote a song about the ivory-bill, known as the "lord god" or "great god" bird because of its breathtaking appearance. Together, they offer a portrait of Brinkley in word and song.

To download 'The Lord God Bird,' PC users: Right-click and select "save target as." Mac users: Control-click and "save link as."

Note: "The Lord God Bird" is only available on NPR.org and does not yet appear on any album.