Accessibility links
Ebbers Sentenced to 25 Years for Fraud Bernard Ebbers, the former CEO of Worldcom, is sentenced to 25 years in prison for his role in what authorities call the largest accounting fraud in U.S. history. Ebbers, 63, was found guilty on charges of securities and reporting fraud. He is expected to appeal.

Bernard Ebbers, the former CEO of Worldcom, is sentenced to 25 years in prison for his role in what authorities call the largest accounting fraud in U.S. history. Ebbers, 63, was found guilty on charges of securities and reporting fraud. He is expected to appeal. 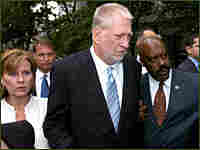 Bernard Ebbers, the former CEO of WorldCom, was sentenced today to 25 years in prison for overseeing the largest corporate fraud in US history. The accounting fraud authorized by Ebbers overstated WorldCom's profits by $11 billion. The company, once valued at more than $180 billion, was forced into bankruptcy. Its top managers all became targets for federal prosecutors. NPR's Robert Smith was in the courtroom today, and he has this report.

Bernard Ebbers sunk lower in his chair as the judge explained the sentence. He pulled a handkerchief from his pocket to wipe away the tears. At 63 years old and with heart problems, Ebbers faced what could amount to a life sentence, 25 years. Ebbers chose not to speak at the sentencing, but outside the courthouse his attorney, Reid Weingarten, said it was not a happy day.

SMITH: Weingarten had argued all morning in court for leniency. He talked about Ebbers' frail health and broke in tears himself when he called his client an angel. Ebbers had given money, he said, to orphanages, schools and special ed programs.

Mr. WEINGARTEN: Bernie Ebbers was transformed into a symbol, a distorted picture of corporate corruption. That's not Bernie Ebbers. He lived a life of unbelievable charity and kindness and compassion, and somehow that didn't fit into this picture of the greedy, corrupt corporate official. It made us crazy.

SMITH: In the end, federal Judge Barbara Jones ignored those arguments and focused on the harsh numbers of the WorldCom case. Billions of dollars in investments and retirement funds evaporated after the fraud was discovered. Tens of thousands of employees were laid off. One of those workers spoke in front of the judge, representing the victims in the case. Henry Bruin(ph) was a salesman for WorldCom before he lost his job and retirement funds.

Mr. HENRY BRUIN (Former Salesman, WorldCom): Basically, it's devastated me, both emotionally, physically and professionally, because it's hard to explain what went on there. And it's hard not to be tainted in some kind of way with the image of, `Oh, you used to work at WorldCom. What exactly did you do?'

SMITH: Ebbers had tried to portray himself as another victim in the fraud, blaming his employees for the accounting schemes. But Judge Jones said that Ebbers was quite clearly a leader of criminal activity, and anything less than 25 years wouldn't reflect the seriousness of the crime. Michael Perino, a securities law professor at St. John's Law School in New York, says the sentence does send a message, but the bigger picture is more confusing.

Professor MICHAEL PERINO (St. John's Law School): We've got some high-profile convictions that have resulted in some serious sentences, WorldCom being one, Adelphia being another. And we've got some high-profile prosecution failures, like HealthSouth. So right now we've got a very mixed bag out there for the CEO, and on occasion the CEO defense of `I didn't know' sometimes works.

SMITH: Perino points out that another former CEO, Kenneth Lay of Enron, will likely use that defense when he goes on trial in January. He said the lesson from the sentence of Bernard Ebbers is that you need to be careful before you take the stand and play dumb.

Prof. PERINO: It's strange credulity, to some degree, to get up and say, `Yes, I'm the CEO of this company. Yes, I'm getting paid boat loads of money, but I didn't know.'

SMITH: Ebbers will now go home to Mississippi. He has 72 hours to report to a probation officer and must show up at prison by October 12th. His lawyers announced that he would appeal and are seeking to have him out on bail while the appeal is being considered. Robert Smith, NPR News, New York.

Avoiding the Next Enron