Accessibility links
Brazilian Girls: A Multilingual Musical Affair The Brazilian Girls are neither Brazilian nor all girls. Instead, the band offers a sound that borrows from reggae, lounge and other influences.

Hear Songs from the Album

Lyrics (Based on Pablo Neruda's Poem, with Translation)

First, know that Brazilian Girls are neither Brazilian nor all girls. The band, which was formed in New York City, is composed of three men and one woman who combine influences ranging from reggae to jazz to pop. Singer Sabina Sciubba's sultry vocals and sly, dreamy lyrics have led to more than a few reviewer blurbs featuring the words "sex," "seduce" or some variation on the theme. 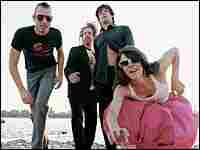 The members of Brazilian Girls met while playing at the New York club Nublu. hide caption

A distinguishing feature of the band's self-titled album is that it features lyrics in five languages, a function of Sciubba's Italian-German upbringing and residence in four countries over the course of her life. "It feels really unnatural to sing only in one language, let alone only in English," she says. The band labels its sound "melting pop."