Accessibility links
In Depth: Q & A on Israel's Pullout from Gaza Israel's plan to withdraw from the Gaza Strip beginning Aug. 17 has been controversial within Israel and raises huge challenges for Palestinian leaders. Mideast Correspondent Peter Kenyon answers questions about the pullout.

In Depth: Q & A on Israel's Pullout from Gaza

In Depth: Q & A on Israel's Pullout from Gaza 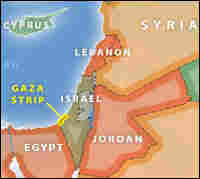 Israel has pledged to begin pulling settlers and troops out of the Gaza Strip on Aug. 17. Region Map: Geoff Gaudreault, NPR hide caption 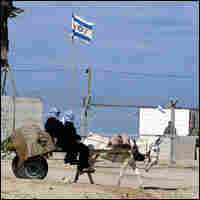 Palestinian women in a cart pass the entrance to the Jewish settlement of Shirat Hayam in the Gaza Strip, Feb. 3, 2004. Nir Elias/Reuters/Corbis hide caption 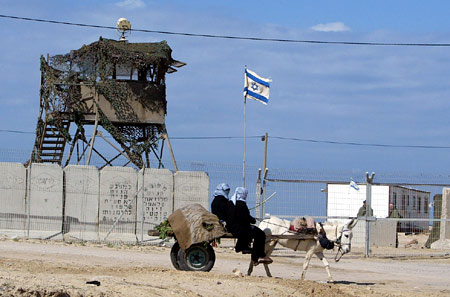 Palestinian women in a cart pass the entrance to the Jewish settlement of Shirat Hayam in the Gaza Strip, Feb. 3, 2004.

COMMENTS ON THE PULLOUT:

Israel's plan to withdraw from the Gaza Strip beginning Aug. 17 has been controversial within Israel and raises huge challenges for Palestinian leaders. Some of the 8,000 Jewish settlers who live in Gaza have vowed not to leave their homes, defying Prime Minister Ariel Sharon's disengagement plan. There's also much at stake for Palestinian President Mahmoud Abbas, who must show he can control security in Gaza and exert leadership over various Palestinian factions. 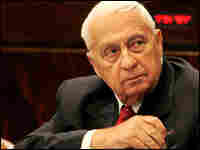 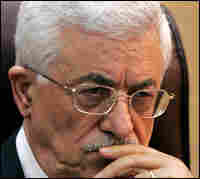 Palestinian President Mahmoud Abbas, speaking at a White House appearance with President Bush, says the Palestinians are ready to coordinate the withdrawal from Gaza with the Israelis, but that a pullout from the West Bank must be part of the equation. (May 26, 2005) 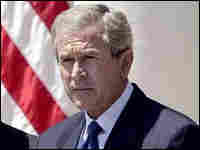 President Bush, at an appearance with Abbas at the White House, cites the Gaza pullout in the context of the "road map," a plan backed by the United States, United Nations, European Union and Russia to resume the Mideast peace process. (May 26, 2005)

Ghazi Hamad, editor-in-chief of the Islamist weekly al-Rissalah based in Gaza, says the Israeli withdrawal from Gaza is not enough to help Abbas shut down the militants. Sharon must also pull Israelis out of the occupied West Bank, Hamad says. (June 2005)

Gaza by the Numbers

Settlers' Compensation: Each of Gaza's 1,700 Israeli families reportedly will receive $200,000 to $400,000 plus two years of rent while they decide on permanent housing.

Why is Israel pulling out of the Gaza Strip?

The decision was made a year or so ago, during the final stage of Yasser Arafat's leadership of the Palestinian Authority. The Israeli government decided that rather than make another attempt to negotiate with Arafat it would unilaterally withdraw the Jewish settlements from the Gaza Strip, as well as four isolated settlements in the northern West Bank. The stated rationale was that this would make it easier for Israel to hold onto territory in the West Bank, where the largest Jewish settlements are located. Previous leaders had offered such evacuations only as part of a comprehensive "land-for-peace" deal with the Palestinians. After Arafat's death and the rise of Mahmoud Abbas, Israeli Prime Minister Ariel Sharon continued to press ahead with his unilateral vision.

Is there any significance to the deadline of Aug. 17?

The Israeli government said it pushed back the starting to Aug. 17, from early summer, to avoid moving the settlers during Tisha B'av, a Jewish holiday that culminates the three-week period of mourning for the destruction of the Biblical temples in Jerusalem. This year Tisha B'av will be from sunset Aug. 13 until nightfall on Aug. 14. The process of pulling out is expected to take up to three weeks.

What is likely to happen in Gaza after Israel withdraws?

Much is unknown. Here are a few issues to watch: Will the settlement buildings be left intact or demolished? Will the Israeli Army maintain a permanent presence on the southern border between Gaza and Egypt? Will Palestinian laborers who are sometimes permitted to cross into Israel for day jobs still be allowed to do so? Will the Gaza port and/or airport be permitted to function? Will goods from Gaza be allowed to get to markets either in Israel or the West Bank?

Wasn't Sharon adamantly opposed to pulling out from Gaza some years ago?

Yes. Ariel Sharon is known to many as the "father of the settlement movement." He is among a number of Israeli leaders, from both the Likud and Labor parties, who encouraged Israeli Jews to settle in Gaza. Tax breaks, government subsidies and other benefits were used to populate the settlements, as well as the assurance that the Israeli Defense Force would be on hand to protect the 8,000 to 9,000 settlers surrounded by 1.3 million Palestinians.

Where will the settlers go?

Many are expected to go to coastal areas just north of the Gaza Strip. Some families have already signed up for compensation and assistance in relocating, while others insist they'll remain in Gaza until the army physically removes them.

What's been the response from the settlers?

They generally consider the disengagement plan a disaster for Israel. They feel betrayed by Sharon, the man who famously said that the Gaza settlement of Netzarim was "the same as... Tel Aviv." Their response has been to organize demonstrations of civil disobedience in an effort to mobilize public opinion against the evacuations. Israeli motorists have been tied up in huge traffic jams as highways were blocked by protesters, and hundreds of Israelis opposed to disengagement have entered the Gush Katif settlement bloc hoping to disrupt the evacuations. Officials say many but not all of those protesters have been removed. Despite the highly visible protests, opinion polls have consistently shown that a majority of Israelis favor the evacuation of Gaza settlements at least in part because of the high cost of maintaining Israeli troops there to protect the settlers.

How does this differ from Israel's pullout from the Sinai Peninsula in the early 1980s?

Supporters of disengagement point to the Sinai evacuations as proof that Israel can give up territory, and be more secure as a result. But opponents argue that in the case of Sinai, withdrawing Jewish settlers was the final price to be paid for a historic peace accord with Egypt. In this case, Israel is winning no political gains for its concession. However, those on the Israeli right who make that argument are also staunchly opposed to any political negotiations with the Palestinians at this time. The Sharon government, meanwhile, calls disengagement a "bold move to end the stalemate in the peace process." Palestinian officials fear that Sharon intends to extract unilateral gains to go with his unilateral withdrawal by strengthening Israel's hold on portions of the West Bank.

And what's going on with settlements in the West Bank?

Four relatively small settlements will be evacuated. But Sharon insists that the large settlement blocs will remain under Israeli control. Palestinians and other critics of the Israeli settlements view all of them as illegal under international law, not merely the "illegal outposts" Sharon has pledged to dismantle. Some analysts have suggested that the disengagement could lead to further diplomatic progress. Others believe Sharon will have all but exhausted his political capital with the Gaza withdrawal, and will spend the rest of his term constructing the West Bank barrier and solidifying Israeli control of territory there.

Does the U.S. have a position regarding the West Bank?

The United States government has never recognized the settlements. But President Bush said last year that "new realities on the ground... make it unrealistic to expect that the outcome of final status negotiations will be a full and complete return (to) the armistice lines of 1949." Some in the Sharon government took that as an American endorsement of Israel's claim to the large West Bank settlement blocs.

Are there larger political issues for the Palestinians?

There's much uncertainty there. For instance, will Hamas, an Islamist movement popular inside Gaza, succeed in portraying the Israeli withdrawal as a victory for its policy of deploying mortar, gunfire and suicide bomb attacks against Israelis? That's what Hezbollah did when Israel withdrew from southern Lebanon in 2000. And, of course, it's not clear whether Mahmoud Abbas and his Fatah movement can succeed in turning an all-Palestinian Gaza Strip into an area governed by the rule of law.

What's at stake politically for Abbas?

The stakes are high. Abbas is well known among Palestinians as a critic of the armed Intifada that led Israel to reoccupy most West Bank cities in 2002. But his support is weak among the poorest and most desperate Palestinians, many of whom live in Gaza. He's also been criticized for moving too slowly to replace the "old guard" that surrounded Arafat, widely perceived on the Palestinian street as corrupt and ineffective. Hamas candidates have won a number of seats in recent local elections in Gaza, and the Islamist movement is considering a larger role in politics.

How has Abbas responded?

He's encouraged Hamas to make the transition from armed conflict to governing. But he also runs the risk that Hamas will overtake his Fatah movement in Gaza. For the average Palestinian, the party in charge matters much less than security, law-and-order on the streets and economic opportunity. Abbas has been arguing for some time that without economic and political hope for his people, the Gaza pullout by itself will accomplish little.

The Mideast In Depth