Accessibility links
A New Internet Diary Frontier: Vlogging It was inevitable — with more bandwidth and faster Internet connections, some bloggers have become vloggers. A growing community of people are turning their lives into grassroots reality TV. 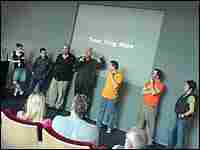 As a blogger on the Internet, it's possible to post entries for all the world to read about the biggest, or littlest, happenings in one's life. Now video bloggers, or "vloggers," are adding a twist to the genre, documenting their lives in mini-movies.

Vlogs in This Story

Warning: May contain profanity or other material inappropriate for young readers.

Laura Sydell reports on the growing community of people who are turning their lives into grassroots reality TV. Though it has been possible to put video on the Web for a long time, widespread adoption of broadband access has made it easier for amateurs to do. In addition, the advent of RSS feeds allows users to automatically receive updates from vlogs they like.

Most vloggers admit they have a limited audience. However, among the vlogging community there's a saying: Andy Warhol believed everyone would have their 15 minutes of fame; vloggers say everyone will be famous to 15 people.