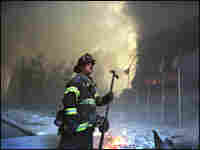 A firefighter stands in the smoking ruins of the World Trade Center two hours after it was struck by terrorists, Sept. 11, 2001. Neville Elder /Corbis hide caption

The New York Fire Department on Friday began releasing thousands of transcripts of oral histories collected from firefighters, paramedics and emergency medical technicians who responded to the terrorist attacks of Sept. 11, 2001. Also released were hours of radio transmissions between 911 dispatchers and fire crews, visceral reminders of the confusion and horror of that day.

The more than 12,000 pages of transcripts are of interviews that the Fire Department conducted with emergency responders in October 2001.

Read the commission's findings on the role of firefighters, police and other first responders on Sept. 11.

Transcripts, timelines and audio from the commission charged with investigating the 2001 terrorist attacks.

The release comes after years of legal wrangling between the Fire Department and The New York Times. New York City officials had tried to keep the records private, but the Times and some families of those who died in the Sept. 11 attacks sued for their release.

Excerpts from the Oral Histories

"It was evident that we weren't going to be able to get to people above the fire. Based on the number of jumpers, we could only assume that hundreds of people were trapped… Then the building started to come down. My initial reaction was that this was exactly the way it looks when they show you those implosions on TV. I would have to say for three or four seconds anyway, maybe longer, I was just watching. It was interesting to watch, but the thing that woke everybody up was the cloud of black material. It reminded me of The Ten Commandments, when the green clouds come down on the street."

— Deputy Commissioner Thomas Fitzpatrick, who was in the lobby of the north tower of the World Trade Center

"We saw them jumping from here down and that was really horrific. There was nothing you could do for them. We wanted to go in after them and they basically told us don't because it's very dangerous at this point."

Transcripts of more interviews conducted with emergency responders on their recollections of Sept. 11, 2001, from The New York Times.

In the 10-day period starting Sept. 11, 2001, NPR News produced many hours of special coverage, in addition to regularly scheduled programming. This is an audio archive of that coverage through Sept. 20.