Audio for this performance is no longer available at the label's request. 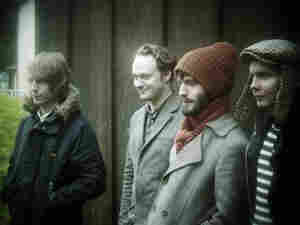 Sigur Ros (pronounced SIG-ger roas) is from Reykjavik, Iceland, and features Jon Bor Birgisson on vocals and guitar, Kjartan Sveinsson on keyboards, Orri Paal Dyrason on drums and Georg Holm on bass. The band's music is ethereal and atmospheric, alternately sung in Icelandic and "Hopelandic," a language they invented. It's a sound the band says is meant to bring listeners "the beautiful landscape of their homeland." Sigur Ros is currently on tour to promote its latest CD, Takk.

The band got its name from vocalist Jon Birgisson's sister, Sigurros, who was born the same year the band formed in 1994. It translates to "Victory Rose."