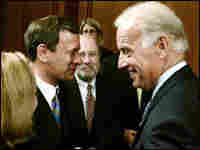 During Wednesday's hearings, Sen. Tom Coburn (R-OK) raised concerns over the growing trend among some justices to cite foreign law to buttress their arguments. The issue has become a divisive one on the Supreme Court and among Republicans who object to the trend.

Right-to-die issues also came up several times. Coburn pressed Roberts to define the end of life. Sen. Joe Biden (D-DE) expressed frustration at Roberts' refusal to answer numerous questions on whether the chief justice nominee believes in a right to die and to make end-of-life decisions.

Listen to highlights from Wednesday's hearings so far:

More on the Roberts Hearings

Sen. Chuck Schumer asks Roberts to "convince" him of his position on judicial restraint.

Coburn presses Roberts on the definition of the end of life.

Roberts tells Chairman Arlen Specter (R-PA) that the principles embodied in the Constitution were meant to apply to changing conditions in the broadest terms.

Roberts says building consensus on the Supreme Court would be one of his main goals if confirmed as chief justice. He's responding to a question from Specter.

Sen. Joe Biden (D-DE) presses Roberts on whether he believes a right to die exists.

Biden accuses Roberts of doing a 'Kabuki dance' in the hearings to avoid offering direct answers on his views.

A recent Supreme Court decision expanded the government's power to seize private property. Roberts tells Leahy that legislators should intervene on behalf of citizens if they don't want to use this expanded authority.

Sen. Russ Feingold (D-WI) asks Roberts whether Congress has the power to prohibit discrimination against gays in employment.

Sen. Jeff Sessions (R-AL) asks Roberts about limiting the reach of the Commerce Clause (which Congress has often used to justify its legislative power over citizens).

Roberts says that he believes in a substantive right to privacy. But he refuses to answer a question from Sen. Charles Schumer (D-NY) about whether his view on privacy differs from that of Justice Clarence Thomas.

Asked by Schumer whether he'll be a justice in the mold of Clarence Thomas and Antonin Scalia, Roberts says, 'I will be my own man.'