Highlights of the Night

Bette Midler, 'Is That All There Is?'

Paul Simon, 'That Was Your Mother'

Dianne Reeves, 'The House I Live In'

Freedom for the Stallion 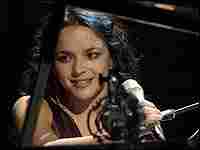 The concert was presented by NPR Music, WBGO Jazz 88 in Newark, N.J., and Jazz from Lincoln Center. The benefit also included an auction, with all proceeds going to aid victims of Katrina.

Wynton Marsalis helped organize the concert, and spent a fair part of the five hours on stage. Reuters hide caption

Shirley Caesar: 'You're Next for a Miracle,' 'He's Working It Out for You,' 'This Joy'

Herbie Hancock: 'Eye of the Hurricane'

Bette Midler, Lincoln Center Jazz Orchestra: 'Is That All There Is?'

Abbey Lincoln: 'For All We Know' 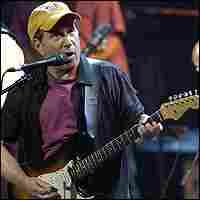 Paul Simon played the Zydeco-influenced 'That Was Your Mother.' Reuters hide caption

Paul Simon: 'That Was Your Mother'

Dianne Reeves: 'The House I Live In'

Elvis Costello and Allen Toussaint: 'Freedom for the Stallion'

Terence Blanchard: 'Over There'

Jon Hendricks: 'This Love of Mine,' 'Tell Me the Truth'