Accessibility links
I. Lewis Libby: The Plight of a Disciplined Risk-Taker The accusations of obstruction of justice, false statment and perjury charges against I. Lewis Libby contrast with a life defined by a keen ability to assess risk and avoid the sort of imbroglio he now faces.

I. Lewis Libby: The Plight of a Disciplined Risk-Taker

I. Lewis Libby: The Plight of a Disciplined Risk-Taker 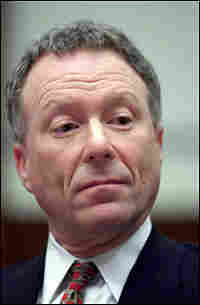 I. Lewis Libby, vice president Dick Cheney's chief of staff, has long tried to stay out of the spotlight. So reticent to speak, he has declined to tell reporters what his first initial stands for. (It's Irve, according to his alma mater's librarian.) Corbis hide caption

Timeline of Libby's role in the CIA leak case

June 12, 2003: Notes of a meeting on this day suggest vice president Dick Cheney told Libby that Mr. Wilson's wife was a CIA officer, according to lawyers involved in the case. (Libby later testifies that he learned the information from journalists.)

June 23: Libby meets with New York Times reporter Judith Miller and tells her about Wilson's trip to Niger and Plame's work with the CIA, according to Miller's later account of the meeting.

July 6: In a New York Times op-ed piece, Wilson writes that he could not verify that Niger sold uranium yellowcake to Iraq.

July 8 and 12: Libby meets again with Miller and "played down the importance of Mr. Wilson's mission and questioned his performance," according to Miller. "My notes indicate that well before Mr. Wilson published his [July] critique, Mr. Libby told me that Mr. Wilson's wife may have worked on unconventional weapons at the CIA. My notes do not show that Mr. Libby identified Mr. Wilson's wife [Valerie Plame] by name."

Aug. 24, 2004: Time Magazine writer Matthew Cooper agrees to give a deposition after Libby personally releases Cooper from a promise of confidentiality.

Sept. 29, 2005: After 85 days behind bars, Miller is released from the city jail in Alexandria, Va., after agreeing to testify before a grand jury. She says in a statement that her source has "voluntarily and personally released me from my promise of confidentiality."

Sept. 30: The Times identifies Miller's source as I. Lewis Libby, Cheney's chief of staff. In Washington, Miller testifies before the grand jury. Afterwards, she declines to confirm that Libby was her source, but says the source sent her a letter and called her in prison.

Oct. 16: In a New York Times article recounting her testimony before the grand jury, Judith Miller writes that notes of her conversations with Lewis Libby suggested that the two had discussed Plame's job at the CIA but not her name. Miller wrote the words "Valerie Flame" in the same notebook she used when taking notes during her interviews with Libby, but said she cannot remember who gave her the CIA operative's name.

Oct. 28: I. Lewis Libby is indicted on obstruction of justice, false statment and perjury charges in connection with his testimony in the Plame leak investigation.

Feb. 6, 2007: I. Lewis Libby is convicted of obstruction, perjury and lying to the FBI in the Plame leak investigation.

Listen to the voices of some of those involved in the CIA leak case.

In 2003 State of the Union Address, President Bush cites evidence of Iraq's failure to disarm

McClellan answers questions on whether the White House has a "credibility problem" at a press briefing in July, 2005

You can tell a lot about a man by the way he skis.

Consider I. Lewis "Scooter" Libby. Despite a reputation as a daredevil with a penchant for skiing headlong down the steepest slopes, "one thing Scooter is not is careless," says Jackson Hogen, a lifelong friend and occasional ski coach to Libby since the days when they roomed together as freshmen at Yale University in the late-1960s. "He's a risk-taker. But like everything else in his life, he's disciplined about it."

Yet in a realm in which risk-taking is alternately rewarded either with chest-beating pride or pummeling humiliation, those who push skiing's limits inevitably find that the limits push back. The 55-year-old Libby may be learning a similarly painful lesson now that he's been indicted on charges that he lied to prosecutors investigating the leak of C.I.A. agent Valerie Plame's name.

If proven in court, the alleged crimes would mark a stark departure from a life defined by a keen ability to assess risk and avoid the very sort of imbroglio in which he now finds himself. Likened by some friends to Talleyrand, the witty, cynical French diplomat renowned for his chameleon-like wherewithal amid the political tumult of 17th-century France, Libby's ability to make most any point of view his own helped him become an agile debater at Phillips Andover. He earned the prestigious title of president of the prep school's debate team. "Scooter was the ultimate pragmatist," notes Hogen, who attended Andover with Libby. "He could argue any point of view and win."

Despite a political start as a "Bobby Kennedy Democrat" during the 1968 presidential election, Libby's move toward conservative politics began when he enrolled in a political science class taught by Paul Wolfowitz, the former deputy defense secretary (and now World Bank president), who was then a Yale professor. Wolfowitz was so impressed by his student's writing skills that he later he coaxed Libby — by then a Columbia University-trained attorney — to leave private practice and become his speechwriter when he joined the Reagan Administration as the head of policy planning in 1981.

Wolfowitz and Libby were later asked to work on Asia policy issues, an area of expertise that Libby would go on to use as fodder for The Apprentice, a novel he published in 1996 that was set in rural Japan. After another stint in private practice, Libby was again called on by his political mentor when Wolfowitz was asked to join the first Bush administration as undersecretary to then-defense secretary Dick Cheney in 1989.

Wolfowitz has publicly credited Libby with a variety of initiatives, such as the successful effort to back Ukrainian independence from Russia after the Soviet Union broke apart.

But Libby's greatest claim to fame at the time was his role in helping Wolfowitz draft the 1992 "Defense Planning Guidance." The 46-page document spelled out a post-Cold War strategy that emphasized the notion of preemption "to prevent the re-emergence of a new rival" to the United States and stop the spread of weapons of mass destruction before they became a direct threat. The highly controversial report was later leaked to the New York Times, and it was subsequently revised to tone down some of its outsized rhetoric.

That didn't stop Libby, Wolfowitz and others worried about the threat posed by nuclear and biological weapons, especially those that might be possessed by Saddam Hussein.

Libby had expressed disillusionment that the Iraqi dictator hadn't been removed from power after the Gulf War. He and his associates grew increasingly concerned that the CIA and other government agencies had failed to adequately assess the threat from Iraq's allegedly renewed weapons programs.

Long worried about the potentially calamitous effects of biological weapons like anthrax, Libby didn't hesitate in making his concerns known to his superiors. "I was hounded by Scooter about what we were doing about things like anthrax," Wolfowitz recently told the Washington Post about the period following the Sept. 11, 2001, terrorist attacks. "He was very concerned about what he saw as a general lack of preparedness."

Such concerns proved a common point of interest between Libby and New York Times reporter Judith Miller, who mentioned him by name in a book she co-authored in 2001, Germs: Biological Weapons and America's Secret War. In it, she notes Libby's frustrations with the tentative language some intelligence analysts used to describe Iraq's weapons programs. "Libby told colleagues that intelligence analysts had an unfortunate habit," she writes in the book. "If they did not see a report on something, they assumed it did not exist."

The seeming lack of information eventually led Libby, who was named Cheney's chief of staff in 2001, to help the vice president push the CIA to find better sources and analysis of Iraq's suspected efforts to restart its nuclear weapons program. The CIA soon dispatched Joseph C. Wilson IV to Niger — at least, in part, at the suggestion of Wilson's wife, Valerie Plame — to confirm allegations that Iraq had tried to buy uranium from that African country. (Cheney has since denied any role in sending Wilson to Niger.)

To Libby's chagrin, Wilson not only didn't confirm the allegations, he spoke out publicly about his trip after President Bush mentioned the Niger-Iraq connection (which the president attributed to a British government intelligence) in his 2003 State of the Union speech. News reports have since quoted former aides of Libby's as saying that their boss was incensed by Wilson's criticisms. And Libby soon set about trying to combat Wilson's assertions that the Bush administration, and Cheney in particular, hadn't leveled with the American public.

Whether Libby's anger at Wilson caused him to expose the identity of Wilson's wife — and risk getting caught for it — lies at the heart of the case pending against him. Regardless of the outcome, he has already resigned from his job and is expected to leave public service, something he has told friends he looks forward to, in part, so he can once again test his mettle on the ski slopes.