Accessibility links
The Streets of a Holy Hindu City Reminders of the Hindu faith are everywhere in Vrindavan — countless temples line the streets and pilgrims march in devotion. There is also stark, third-world poverty and suffering. But for the faithful, the city is a manifestation of heaven, here on Earth.

Listen
The Streets of a Holy Hindu City 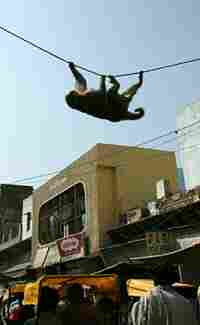 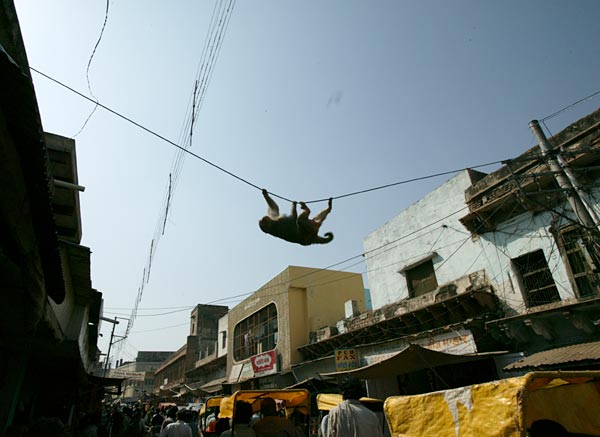 A monkey crosses a street in Vrindavan using an overhead power line. 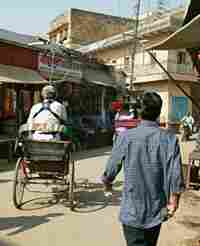 Taking a rickshaw ride is one of the quickest ways to travel through Vrindavan's narrow streets. Alex Chadwick, NPR hide caption 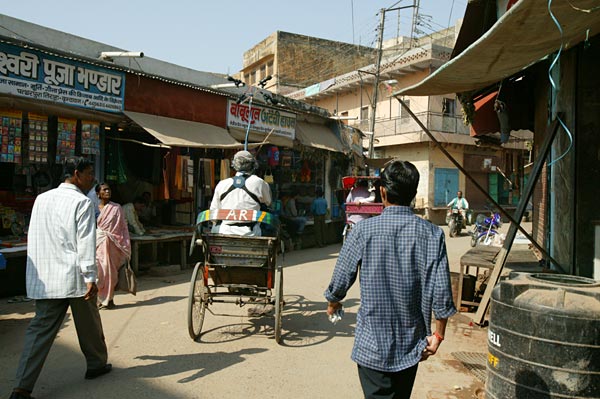 Taking a rickshaw ride is one of the quickest ways to travel through Vrindavan's narrow streets. 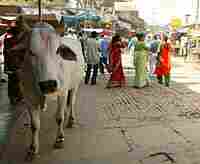 Cows have a special place in Hindu mythology — there's Kamadhenu, the "wish-fulfilling cow," and the creatures are also believed to be the earthly vehicles for several deities.

View a Multimedia Slideshow: Sights and Sounds of Vrindavan

Download extended MP3 files of audio recorded in and around the holy Hindu city:

To download: PC users: Right-click and select "save target as." Mac users: Control-click and "save link as."

Among the constellation of Hindu deities, Krishna is the truest expression of God. The faithful believe Krishna assumed human form in Vrindavan thousands of years ago and lived a single life as a man. For countless generations since, the town and the miles of low hill countryside surrounding it have been considered sacred.

Reminders of the Hindu faith are everywhere. There are countless temples, pilgrims marching through narrow streets following holy men in saffron robes, devotional music and singing. There is also stark, third-world poverty and suffering. It's city of narrow, trash-blown streets and open sewers, alongside a river black with pollution — the overcrowded capital of New Delhi lies upstream.

Still, there is incredible beauty here. For thousands of years, the faithful have created monuments of stone to mirror the glory of heaven. There are elaborately carved arches and domes of red sandstone, the lines of their handsome facades softened with age. There is beauty, because Vrindavan is heaven — not a metaphor for heaven, or a way to heaven. This is heaven.

Part of Krishna's popularity, Hindu scholars say, is that he is both the embodiment of power and force and a personal friend to the faithful. Pilgrims come to Vrindavan to feel that intimacy with the divine.

"What makes Vrindavan a special place is that if you wish to learn how to be friend of Krishna, come to Vrindavan," says Ranchor Prime, a London native who converted to Hinduism while studying to become an Anglican priest. "That image of friendship with god has been delved into deeply in Vrindavan for thousands of years."

Alex Chadwick's extended interviews on the roots and beliefs of the Hindu faith: