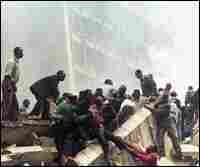 An injured man is removed from the wreckage after the bombing of the U.S. embassy in Nairobi, Aug. 7, 1998. © Reuters/Corbis hide caption 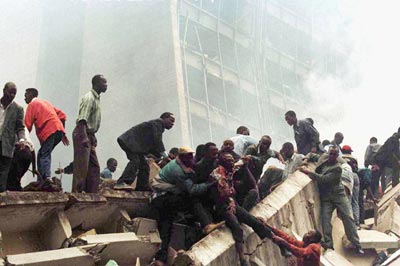 An injured man is removed from the wreckage after the bombing of the U.S. embassy in Nairobi, Aug. 7, 1998. 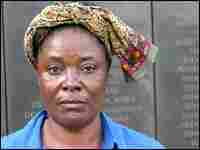 Naomi Kerongo is conducting a hunger strike, seeking U.S. compensation for her mental and physical scars from the 1998 U.S. embassy bombing in Nairobi. She's standing at a memorial at the site of the bombing. Tom Bullock, NPR hide caption

Kenya was the site of some of al Qaeda's first and deadliest attacks. Today, tourist-dependent Kenya insists there is no lingering terrorist threat.

But the facts show otherwise: Kenyan courts have failed to successfully prosecute terrorists accused in the 1998 and 2002 bombings, while ordinary Kenyans decry widespread Kenyan corruption, neglect and violence.

Africa expert Ted Dange, with the Congressional Research Service, says the Kenyan government's persistent belief that terrorism is a "foreign" and "outside problem" is dangerously naïve. "These are not [Middle Easterners] roaming around Kenya," he says. "These are Kenyans with affiliation to al Qaeda. And the leaders who carried out the attacks on our embassies are still at large."

Kenyan government officials dispute that they let the fugitives slip through their hands.

The legal failures have prompted complaints from Western diplomats, including a top U.S. official in Africa who said Kenya's prosecution of terrorism "remains far below the standard required to deal with the threats at hand."

There's growing mistrust between the minority Muslim community and the Kenyan government. Ten percent of Kenyans are Muslim. Five times the Kenyan parliament has rejected versions of what's called the Suppression of Terrorism bill. The proposed bill would have allowed suspected terrorists to be held incommunicado for up to 36 hours, among other controversial measures. It was widely seen by Kenyans as extreme.

Sheik Abduhl Rahman, who directs Kenya's Muslim Consultative Council, says the legislation targets Muslims and the proposal has already damaged relations with the Muslim community. "Our concern is, even though the bill has not been passed as law, the police are using its provisions to incarcerate people," Rahman says. "We have heard cases where some people who have come out of such incarceration have alleged torture by the police."

This series was made possible, in part, by The Stanley Foundation.