Accessibility links
California Town Still Scarred By 1964 Tsunami On Good Friday, March 27, 1964, the largest earthquake ever recorded in North America struck Anchorage, Alaska. It sent tsunami waves rushing at the speed of a jetliner down the coast of the Pacific Northwest to Crescent City, Calif.

Totaled cars collected and dumped after the tsunami.

Front Street after the tsunami.

Citizen's Dock after the tsunami.

On Good Friday in 1964, the largest earthquake ever recorded in North America struck Anchorage, Alaska. Shifting tectonic plates displaced billions of tons of ocean water and sent tsunami waves rushing at the speed of a jetliner down the coast of the Pacific Northwest.

The tsunami struck several coastal communities on that March 27, but its biggest punch was saved for Crescent City, Calif., a small lumber and fishing town of about 3,000 residents just south of the Oregon border.

It came by the light of a full moon in a series, it's believed, of four waves. The first wave caused only minor flooding of shops and stores in the small downtown area near the shore. But Crescent City residents were familiar with high water. They had also had their share of tsunami false alarms. So residents and shop owners weren't terribly distressed by the foot of water that flooded the lower blocks of downtown.

Gary Clawson and his father Bill owned a tavern called the Longbranch. That night they, along with Clawson's mother, fiancée and two employees, returned to the Longbranch to inspect the damage, mop up, retrieve the cash box and have another drink to celebrate Bill's birthday.

"My dad, I'll never forget, he jumped on the bar, drew himself a beer and he says, 'Well happy birthday to me,'" recalls Gary Clawson. And then the elder Clawson said, "Let it come."

Their decision to stay proved fatal.

Suddenly, rising waters ripped the Longbranch off its foundation. After the group escaped to the floating roof, Clawson found a boat to rescue his family and friends. But the boat capsized and everyone, except for the 27-year-old Clawson, drowned.

Eleven people in all died in Crescent City that night in what became known as the worst tsunami in the history of America's lower 48 states.

Susan Andrews of member station KHSU in Arcata, Calif., assisted in the reporting of this story.

Below is an excerpt of Dennis Powers' book about the tsunami, The Raging Sea. The excerpt quotes an eyewitness account of the biggest wave:

Peggy Coons and her husband Roxey were the keepers for the Battery Point Lighthouse in Crescent City at the time of the tsunami. They wrote about the fourth, largest wave:

"The water withdrew as if someone had pulled the plug. It receded a distance of three-quarters of a mile from the shore. We were looking down, as though from a high mountain, into a black abyss. It was a mystic labyrinth of caves, canyons, basins, and pits, undreamed of in the wildest of fantasies.

"The basin was sucked dry. At Citizen's Dock, the large lumber barge was sucked down to the ocean bottom. In the distance, a black wall of water was rapidly building up, evidenced by a flash of white as the edge of the boiling and seething seawater reflected the moonlight. The Coast Guard cutter and small crafts, that had been riding the waves a safe two- miles offshore, seemed to be riding high above the 'wall' of seawater.

"Then the mammoth wall of water came barreling towards us. It was a terrifying mass, stretching up from the ocean floor and looking much higher than the island. Roxey shouted, 'Let's head for the tower!'-but it was too late. 'Look out!' he yelled and we both ducked as the water struck, split and swirled over both sides of the island. It struck with such force and speed that we felt like we were being carried along with the ocean. It took several minutes before we realized that the island hadn't moved.

"The wave crashed onto the shore, picking up driftwood logs along the beach and roadway. It looked as though it would push them onto the pavement at the end of A Street. Instead, it shoved them around the bank and over the end of the outer breakwater, through Dutton's lumberyard. Big bundles of lumber were tossed around like matchsticks into the air, while others just floated gracefully away."

The ocean covered the outer breakwater as it rolled over Dutton Dock. The surges left the huge lumber barge resting on top of Citizen's Dock. Once attached to a dock, the Citizen's fish storage buildings were now dancing over the ocean. Moored fishing boats bobbed up and down, and one boat tore up Elk Creek as if it was motorized.

"When the tsunami assaulted the shore, it was like a violent explosion. A thunderous roar mingled with all the confusion. Everywhere we looked, buildings, cars, lumber, and boats shifted around like crazy. The whole beachfront moved, changing before our very eyes. By this time, the fire had spread to the Texaco bulk tanks. They started exploding one after another, lighting up the sky. It was spectacular!

"The tide turned, sucking everything back with it. Cars and buildings were now moving seaward again. The old covered bridge, from the Sause fish dock, that had floated high on the land, had come back to drop almost in its original place. Beds, furniture, televisions, mattresses, clothing, and other objects were moving by so fast that we could barely tell what they were. The next wave rushed past us into town but appeared to do no damage. The rest of the night, the water and debris kept surging in and out of the harbor."

That night, they had never seen as many violent and monstrous changes in the tide as had then occurred — and they never would again. When daylight finally came, Peggy Coons looked out again: 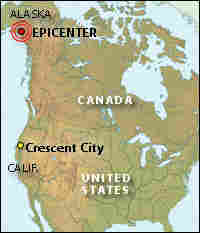 An earthquake just off the Alaskan coast triggered the tsunami that hit Crescent City. Waves near the epicenter in Alaska were significantly larger than the ones that reached California. The tsunami killed more than 100 people in Alaska. hide caption 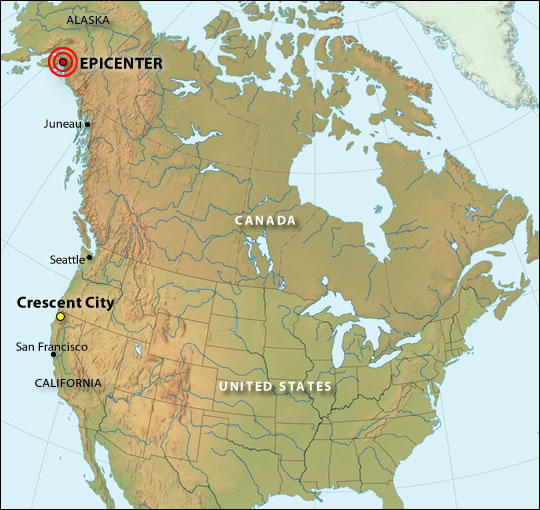 An earthquake just off the Alaskan coast triggered the tsunami that hit Crescent City. Waves near the epicenter in Alaska were significantly larger than the ones that reached California. The tsunami killed more than 100 people in Alaska.

"The whole beachfront was a mass of destruction. Logs, boats, furniture, cars, along with buildings were tossed helter skelter. The lumber from three big yards was high on the beach or floating around in the water. The two small buildings, along with cars that had washed off the dock, had faded from sight. Some of the boat landings and small crafts were sailing around on top of the ocean in a dizzying pattern.

"At midday, the tide flowed in and filled the basin so full that it ran back over the breakwater. The big tug returned, hooked onto the lumber barge, and pulled it back out to sea. The other boats came in, hovering around the Coast Guard cutter. The silent killer, after taking its toll of life and property had left. Isolated on the island, we watched the search begin the next morning along Elk Creek for bodies. It was hard to believe that, of all the things that floated by, the only bit of salvage to reach the island was one spool of lavender thread!"

From Dennis Powers' The Raging Sea and the Del Norte County Historical Museum.

The Powerful Account of the Worst Tsunami in U.s. History