Accessibility links
The Death of Richard Rust Richard Rust died last year after government agents detained him –- not in a secret detention center in Iraq, but in a federal prison in Oakdale, Louisiana. His death raises troubling questions about whether a pattern of medical neglect exists in the Department of Homeland Security's detention centers.

Listen
The Death of Richard Rust

Richard Rust died last year after he was detained by U.S. government agents — not in a secret detention center in Iraq, but in a federal prison in Oakdale, La. 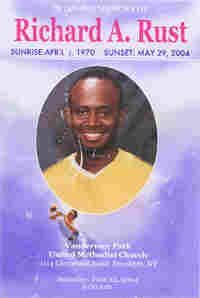 The funeral program for Richard Rust, an immigration detainee who died in U.S. custody last year after federal prison workers failed to give him proper medical care. Courtesy of the Rust Family hide caption

Examine documents from Daniel Zwerdling's inquiry into the death of Richard Rust:

Evidence suggests that Rust, an immigrant from Jamaica, is not the only immigrant detainee who has died recently after Homeland Security arrested them. NPR also looked into the deaths of three other detainees. In each case, witnesses charge that the immigrants died after guards and medical staff failed to give them proper medical care. The incidents raise a question: Is there a pattern of medical neglect in Homeland Security's detention centers?

The Department of Homeland Security detained more than 200,000 non-citizens last year in jails and prisons across the country. Most of the detainees were not charged with crimes, but rather with violating civil immigration laws. They are held while officials try to obtain court orders to deport them.

Louisiana's Oakdale Federal Detention Center is part of a sprawling federal prison complex. Surrounded by high fences and dense forests, it houses almost 1,000 immigrant detainees on any given day. To understand what transpired in the final minutes of Richard Rust's life there, NPR tracked down eight current and former detainees who knew Rust. Each says he witnessed all or part of what happened to Rust.

The way they tell it, Rust became popular with fellow detainees after Homeland Security locked him up on Feb. 3, 2004.

"Richard Rust, he's a kind person, okay? He's got a harmony about him," recalls Kerion Dawkins, who was deported late last year to Jamaica. (Dawkins still has trouble accepting that Rust is dead, so he talks about him in the present tense.) "If you and the next person has a problem, he'll sit down and try to help work it out. He'll be a counselor, or a judge if it's a dispute."

Dawkins and other detainees say it was hot and humid on the evening of Saturday, May 29, when the guards let them leave their cellblocks and spill into the recreation area. Richard Rust began playing basketball, but then he paused to get a drink of water in the prison barbershop, just a few yards away.

Dawkins was working that evening as one of the barbers. Just after Rust walked in, Dawkins says his friend gasped "I can't breathe!" and then collapsed in his arms. Dawkins remembers that another barber ran outside to look for the officer who was supposed to be on duty, waving his hands and shouting, "There's a guy in the rec center dying! He's having a heart attack!" Detainees flocked to the recreation center's doorway, to see if they could help.

Homeland Security's detention centers and federal prisons have detailed medical standards, which declare that their staffs are supposed to respond to medical emergencies "within a 4-minute response time" — and then apply CPR and other life-saving measures if they're needed. But the detainees say that after a guard found Rust — not breathing and without a pulse — they saw no one on Oakdale's staff perform CPR or use the prison's automatic defibrillator to try to revive him.

The detention center has a large medical unit only a couple minutes' walk from the spot where Rust was lying on the floor. Yet detainees say nobody from the medical staff showed up for at least 20 minutes. The community hospital is less than four miles away, down a few small-town roads, but detainees say the ambulance didn't come for at least 40 minutes.

Soon after the ambulance finally brought him in, doctors at the hospital pronounced Rust dead.

The next morning, detainees held a prayer service to honor his memory. They say that later the same day, guards rounded up dozens of immigrants who had been friendly with Rust, or who acknowledged that they were upset about the way the staff responded after he collapsed. The guards locked all of them in "The Hole" — the prison's wing of small, windowless punishment cells — where some were forced to stay for as long as three months.

NPR attempted over several months — through dozens of e-mails, registered letters and phone calls — to get officials at the Department of Homeland Security and Oakdale Federal Detention Center to discuss the events surrounding Rust's death. They refused. A spokesman at Oakdale sent a brief e-mail declaring that after Rust collapsed, "staff and medical personnel responded immediately, and CPR was administered until the responding ambulance arrived."

Past Stories on Detainee Abuse

Read stories from Daniel Zwerdling's award-winning series in 2004 on the abuse of immigrant detainees.

But nationally respected specialists on prison health care told NPR that if the detainees accounts are true — their stories are remarkably consistent — then the prison's efforts fell far short of the required standard of medical care. "It's unconscionable in my opinion," says Dr. Robert Greifinger, who has investigated health care systems in prisons for the federal and local governments. Greifinger has not personally investigated Rust's death, but he says if the detainees' accounts are accurate, the Oakdale staff's "inaction in the face of his life-threatening condition could have been a cause of his death."

Greifinger says the detainees' story suggests the possibility that the staff's response "was more than negligence — that it was what, in legal terms, is called 'deliberate indifference' to serious medical needs. If there's deliberate indifference, it constitutes cruel and unusual punishment."

NPR has spent months investigating this issue without being able to confirm exactly how many other immigrants have died in detention due to staff neglect. What is known is that at least three other detainees died at detention centers in Alabama, Maryland and Florida, less than six months after Rust died. Detainees in those centers also charge that guards and other staff failed to give the victims prompt medical care. Officials at Homeland Security and the jails would not discuss those cases, either.

Cheryl Little, director of the Florida Immigrant Advocacy Center, says that she and her staff have investigated hundreds of cases in the past decade in which detainees have become sick — and some died — after they might not have received proper medical care. She says medical neglect "is the number one complaint we get from detainees when we visit them in any of the facilities where they're housed in Florida."

In one case, lawyers at the U.S. Justice Department investigated the medical unit at one jail in Florida after Little reported that detainees' medical problems were being neglected. The assistant attorney general concluded that the staff's attitudes "pose a significant threat" to the inmates' health.