Audio for this concert is no longer available at the label's request. 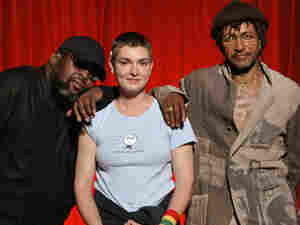 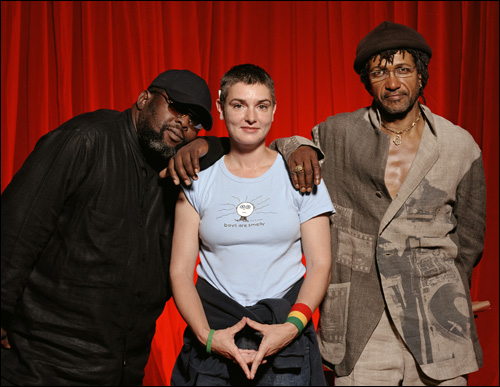 Once one of pop music's most distinctive and controversial stars, Sinead O'Connor returns for a night of Jamaican roots music with reggae legends Sly Dunbar and Robbie Shakespeare, recorded live at Washington, D.C.'s 9:30 Club. Hear their full concert, originally webcast live on NPR.org Dec. 6. O'Connor is on tour to promote her new CD, Throw Down Your Arms, which features OConnors interpretations of Jamaican roots and reggae classics, produced by Sly and Robbie.

O'Connor was just 19 when she signed her first record deal in 1985. Two years later she emerged with the critically acclaimed album The Lion and the Cobra. O'Connor's brash sound, shaved head and colorless robes were a stark contrast to the flamboyant hair metal bands popular at the time.

In 1990, O'Connor released her most successful album, I Do Not Want What I Haven't Got, which featured the hit "Nothing Compares To You," a song written by Prince. The album established OConnor as a major star, but she stirred up controversy for refusing to perform in New Jersey if "The Star Spangled Banner" was played before her show. Later she pulled out of a performance on NBCs Saturday Night Live in protest of the show's guest host, Andrew Dice Clay. O'Connor further angered some listeners when she withdrew her name from the Grammy competition, even though she was nominated for four awards.

In 1992, O'Connor made what some saw as a career-ending move when she tore up a picture of the Pope on national television, after performing on Saturday Night Live. It drew immediate and widespread condemnation. Two weeks later she was booed off the stage at a Bob Dylan tribute concert. O'Connor later announced she was retiring from the music business.

O'Connor's return in 2005 brought her most surprising creative effort to date: a collection of reggae and Jamaican roots cover tunes by artists like Peter Tosh and Burning Spear. O'Connor recorded the album in Jamaica at Bob Marley's former studio with Sly and Robbie, two of the biggest names in reggae.

Though O'Connor's switch from rock and pop to reggae may seem strange to some, the Irish-Catholic singer tells NPR she sees strong similarities between her culture and Jamaica's. "You know, there are huge blood ties, for a start," O'Connor says. "There are huge ties between Africa and Ireland going way back before Jamaica even existed as it is now. And we were colonized by the same people and by the same religion in a lot of ways. And we have the same, I think, similarities in our music. You know, there's a huge kind of longing, yearning and calling in the music from Ireland and Jamaica, particularly the singing."

O'Connor's performance at the 9:30 Club in Washington, D.C. is the latest in NPR Music's ongoing live concert series from All Songs Considered. Previous shows are listed in the right column of this page.