Accessibility links
Bluster and Satire: Stephen Colbert's 'Report' Stephen Colbert is the former senior correspondent on Comedy Central's The Daily Show. True to the industry he parodies, Colbert has landed the anchor's chair on a fake news show of his own. 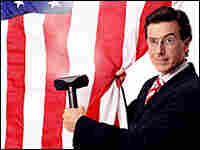 Comic and journalist Stephen Colbert is the former senior correspondent on Comedy Central's The Daily Show with Jon Stewart. And true to the industry he parodies, Colbert's incisive work has landed him in the anchor's chair on a show of his own: The Colbert Report.

Colbert, one of the most distinguished names in fake news, has won fans with a brand of reportorial analysis that may be described as fast-forward-thinking. The Colbert Report is modeled after other personality-driven news reviews — chief among them, The O'Reilly Factor, Fox's ratings behemoth starring Bill O'Reilly.

In a review in The New Yorker, Nancy Franklin wrote that Colbert "resembles nobody more than he does Bill O'Reilly, and like O'Reilly, he conveys fake humility and easy rage toward inappropriate targets."

Colbert began his comedy career with Second City in Chicago. He helped create the HBO sketch comedy series Exit 57 — which won five Cable ACE awards in 1995 — and he also wrote and performed sketches on The Dana Carvey Show. Colbert is also the voice of Ace on the Saturday Night Live animated skits Ace & Gary: The Ambiguously Gay Duo.