Accessibility links
Lessons from Cairo, Illinois As a young girl growing up in a town torn by racial tensions, NPR's Rachel Jones learned about heartache, but also about survival and kindness. 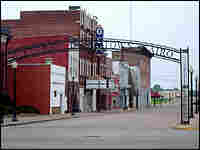 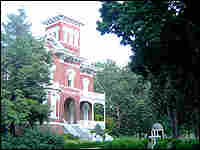 I learned all I needed to know about the Civil Rights movement from a box of Crayola Crayons. It happened in 1967, the year I entered first grade at Emerson Elementary, back in my hometown of Cairo, Ill.

Granted, I was mostly oblivious to the boycotts and the marches and gunshots and legal battles that led to the integration of Cairo schools. But I wasn't completely naïve. I knew I couldn't go inside certain stores down on Commercial Avenue, or ride my bike in certain parts of town. But none of that mattered when I got to school and was able to share Kathy Pitcher's 64-pack of Crayons. To a poor black girl who had barely managed to score a measly 8-pack, that big yellow and green carton was the portal to heaven. The sky wasn't just blue anymore, it could be "teal." A ribbon wasn't just pink, it was "magenta."

But one morning when I got to school, Kathy was sitting way across the room, instead of in her desk beside me. When I tried to join her, my teacher gently guided me back to my desk. Later, during recess, Kathy told me her mother didn't want her sitting next to me.

I'm 44 years old, but I still remember how I felt at that moment as if it had just happened last week.

So when my brother-in-law Ron urged me to listen to a CD inspired by Cairo's history, I wasn't really looking forward to it. Thinking about Cairo hurts too much. It always breaks my heart to go back home and see another empty lot or crumbling building, another business shuttered, another young person walking the streets with no job, no goals, no future. The alienation that stung my head and heart at age 6 has turned to deep sorrow over Cairo's ravaged landscape.

The last thing I expected to feel listening to Greetings From Cairo, Illinois was pride. Before hearing the first song, I almost dismissed musician Stace England as a well-meaning but clueless interloper who thought he had figured out all of Cairo's problems over a few beers.

But England wasn't just some fly by night troubadour trying to profit from Cairo's woes. With the help of 50 other local musicians and singers, England had employed an impressive musical range to try and explain the puzzle that is Cairo.

The CD shifts effortlessly from the velvety, bayou sound of "Cairo Blues" to the hard-charging rock and roll of "Ulysses S. Grant Slept Here." "Equal Opportunity Lynch Mob" still haunts me. The bouncy bluegrass style of "The North Starts in Cairo, Illinois" flowed with the poignant warning about the corrosive legacy of prejudice in "Far From the Tree." Other songs, like "White Hats" and "Prosperity Train," perfectly echo the struggle and futility of the battles that were fought in Cairo.

England's tribute didn't feel like mockery. It felt earnest. It felt like someone who hadn't lived the turmoil actually got it. It felt like England knew exactly how I felt on that day in 1967, how my heart had ached before I was old enough to know what heartache was.

Once the last song played, I knew I had heard something as genuine as my memories of sitting on the wall at the Ohio River levee 30 years ago, staring out at the muddy waters, wondering if I would ever get a chance to put Cairo behind me forever.

But then I realized I would never get Cairo out of my system, and I shouldn't want to.

I'm a survivor. Cairo taught me, and still teaches me, how pointless and soul-destroying hatred is. That lesson means even more to me than the memories of teal and magenta Crayons in a bright yellow and green box.