Accessibility links
Judging Samuel Alito on Abortion Rights Having cleared the Senate Judiciary Committee on Tuesday, Samuel Alito is one step closer to a seat on the Supreme Court and an important role on the issue of abortion. 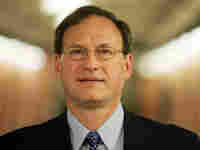 Having cleared the Senate Judiciary Committee on Tuesday, Samuel Alito is one step closer to a seat on the Supreme Court and an important role on the issue of abortion.

Abortion at the Alito Hearings

Judiciary Committee Democrats aggressively questioned Alito on his commitment to abortion rights throughout his Senate confirmation hearings. Alito vowed to approach the issue with an open mind. But he did not call Roe "settled law" and did not say whether he would uphold the precedent. Alito's views on abortion were also addressed by outside witnesses testifying before the panel.

Alito tells Committee Chairman Arlen Specter (R-PA) that he'll approach abortion rights with an open mind despite the beliefs he espoused in a 1985 memo.

Sen. Dianne Feinstein (D-CA) presses Alito on why he won't use the phrase 'settled law' to describe 'Roe,' and Alito replies.

Alito says he has not always upheld restrictions on abortion.

Kate Michelman, the former president of the National Abortion and Reproductive Rights Action League, tells the committee that Alito 'rejects the idea of personal privacy as a fundamental American ideal.'

Among thousands of pages about Samuel Alito's past released before his confirmation hearings, a handful shed light on his abortion views:

During his confirmation hearings the week of Jan. 9, Alito said repeatedly that Roe v. Wade, the 1973 Supreme Court decision that legalized abortion, warranted respect. But he declined to call it "settled law." Alito is nominated to succeed Justice Sandra Day O'Connor, who over the past decade has held a key vote in favor of Roe.

Feminist author Danielle Crittenden believes Alito's confirmation could be the best thing to happen to the abortion debate in years.

Abortion rights advocate Kate Michelman says Alito is out of touch with the realities of women's abortion decisions.

A Liberal Perspective on the Alito Nomination Oct. 31, 2005

Hear Jay Sekulow, the American Center for Law and Justice's chief counsel, on how Alito's confirmation could be a "grand slam" for conservatives.

A Conservative Perspective on the Alito Nomination Oct. 31, 2005

The appeals court judge won the support of all 10 Republicans on the committee and the dissent of all eight Democrats. Debate in the full Senate is expected to be vigorous and the vote divided, but Alito is widely expected to be confirmed to the high court by Jan. 27.

The speculation over how Justice Alito might treat abortion cases stems from several opinions he wrote in the 1980s. The first, a 1985 memo he produced while working as a Justice Department lawyer, discusses whether the government should take a position on an abortion rights case pending before the court. In his memo, Alito wrote that the government "should make clear that we disagree with Roe v. Wade," the pivotal 1973 Supreme Court decision that legalized abortion.

He made other controversial comments in a "personal qualifications statement" written while applying for a job at the Justice Department. In it, Alito said that he was "particularly proud of my contributions in recent cases in which the government has argued in the Supreme Court... that the Constitution does not protect a right to abortion."

Abortion rights advocates see this wording as evidence that Alito would seek to reduce Roe's range. His supporters, however, say the documents simply reflect a career lawyer representing his client — the anti-abortion Reagan administration.

As a federal appeals court judge in 1991, Alito offered his most detailed opinion about abortion in Planned Parenthood of Southeastern Pennsylvania v. Casey. In his dissent, he wrote that women should be required to notify their husbands before having an abortion. But in 1992, the Supreme Court took up the case, reaffirming a constitutional right to abortion and striking down the very restriction Alito had advocated.

Nancy Northup, president of the pro-choice Center for Reproductive Rights, notes that Alito arrived at his opinion in the case despite lengthy testimony that pregnant women in troubled marriages could be put at risk if they were forced to notify their husbands before an abortion. "Judge Alito disregarded that factual evidence and found that this law should stand," Northup said.

Abortion opponents like Kathy Cleaver-Ruse, a senior fellow for legal studies at the Family Research Council, believe Alito might support further limits on abortion. "There may be other cases that would further modify Roe v. Wade, and Judge Alito, from all we can understand, would be certainly open to hearing logical arguments about why Roe v. Wade might be further modified," she said.

A Respect for Precedent

But Alito's record on abortion cases is not one-sided. As an appeals court judge in 2000, he helped overturn a New Jersey ban on what opponents call "partial-birth abortions," a surgical procedure of extracting a fetus from the womb between the fifth and ninth months of pregnancy. While not a commonly used method, "partial-birth abortions" have been the focus of much anti-abortion activism and legislation. Alito voted to overturn the ban based on the fact that the Supreme Court had struck down a similar law in Nebraska just weeks before. Alito's deference to the Supreme Court's precedence is notable, said Kathy Cleaver-Ruse. "In this case, we have Judge Alito showing more restraint than the majority judges, by saying 'Look, we need to follow Supreme Court precedent,'" she said. "It's not proper for us to go off on our own, write our own opinion about the law."

If confirmed by the full Senate, Alito likely will face abortion cases soon. For example, a federal ban on "partial-birth abortions," passed in 2003 by Congress and approved by President Bush, has been invalidated by lower courts. The government has asked the Supreme Court to review the case.

The Supreme Court last struck down a ban on "partial-birth abortions" in the state of Nebraska in 2000. Retiring Justice Sandra Day O'Connor's vote was decisive in that decision. Following her departure, the federal battle over whether a ban will take effect faces a closely divided bench. As a justice on the high court, Alito could likely tip the balance.

Abortion and the Law