Accessibility links
Challenger: Reporting a Disaster's Cold, Hard Facts NASA marks a sad occasion this week, the 20th anniversary of the explosion of the Space Shuttle Challenger. NPR's Howard Berkes remembers the rush to understand why the Challenger had exploded. 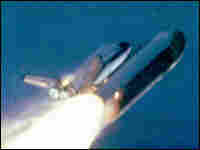 The Challenger moments before it disintegrated on Jan. 28, 1986. It was travelling at nearly 2,000 mph, at a height of 10 miles, when it exploded. AFP/Getty Images hide caption 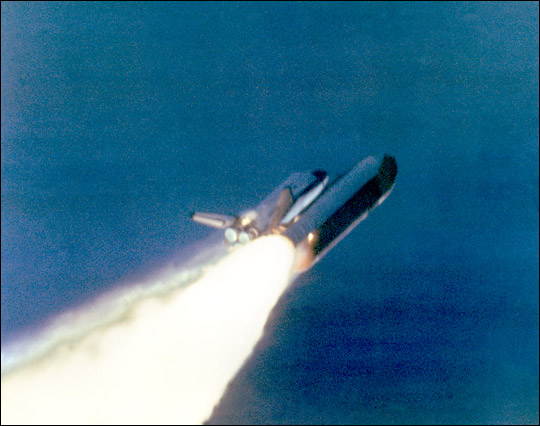 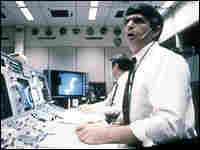 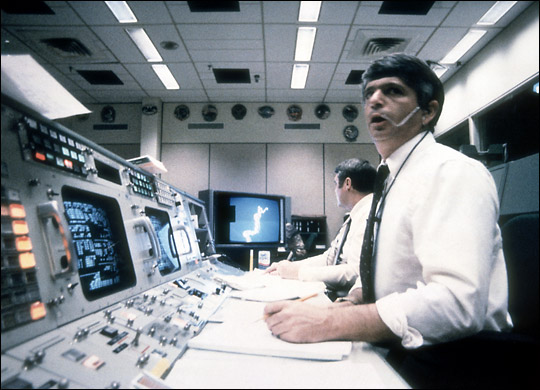 Editor's note: NASA and the nation mark a sad occasion this week, the 20th anniversary of the explosion of the Space Shuttle Challenger. On Jan. 28th, 1986, the spacecraft blew apart just 73 seconds after launch.

NPR's Howard Berkes and Daniel Zwerdling were the first to report details of an effort by Thiokol engineers to postpone the Challenger launch due to safety concerns over cold launchtime temperatures. Berkes recounts their hunt for the story.

On Feb. 20, 1986, NPR reporters Howard Berkes and Daniel Zwerdling first reported the effort by Thiokol engineers to postpone the Challenger launch due to cold launchtime temperatures.

The images are indelible for those who saw them. Contrails in the sky billowing out like leafy stems from a flower. The face of Grace Corrigan peering skyward, etched in confusion, shaded by a hand. Her daughter Christa McAuliffe, NASA's first "teacher-in-space," was aboard the Space Shuttle Challenger with six other astronauts. She scoured the Florida sky for the spacecraft, but saw only smoke and debris.

In 1988, Howard Berkes went back to Morton Thiokol to see what lessons were learned from the Challenger explosion, and how the company had changed in response.

Three weeks later, in a living room in Brigham City, Utah, a proud space program engineer watched the scene again. It played and replayed on television screens, endlessly it seemed. "I should have done more," the engineer told me, shaking his head. "I could have done more."

That engineer and several others were not surprised when Challenger exploded 73 seconds after liftoff on Jan. 28, 1986. They worked for Morton Thiokol (now ATK Thiokol), the Utah-based NASA contractor which produced the solid rocket motors that lifted space shuttles from their launch pads. The rockets were like stacked metal cans stuffed with highly explosive propellant. The forces of liftoff tended to pull the cans apart slightly where they joined. Rubber o-rings lined those joints and kept burning propellant from leaking out.

Some of those Thiokol engineers expected o-ring failures at liftoff. They knew that cold overnight temperatures forecast before launch would stiffen the rubber o-rings. They knew that stiff o-rings didn't provide a secure seal. In fact, there had been evidence of leakage, what the engineers called "blowby," on an earlier shuttle flight. This would be the coldest launch ever.

As I sat with that despondent Thiokol engineer in his home in Utah, my colleague Daniel Zwerdling stood outside a hotel room door in Huntsville, Alabama. Another Thiokol engineer was inside. He first spoke through the door, weeping at times. When the door finally opened, Zwerdling heard a remarkable tale, matching in almost every detail the story that simultaneously unfolded to me in Utah. The engineers had resisted the launch, had recommended against it, citing the "blowby" in an earlier low-temperature launch and studies of the elasticity of the o-rings. The night before liftoff, these two Thiokol engineers, along with several colleagues, tried to convince NASA to postpone liftoff.

"I fought like hell to stop that launch," one of the engineers told Zwerdling. "I'm so torn up inside I can hardly talk about it even now."

Both engineers asked that we not reveal their names in 1986. They feared for their jobs. Neither has released us from that pledge of confidentiality, so they shall remain unnamed.

It wasn't long after the Challenger explosion that word of a pre-launch argument leaked out. A source who asked to remain anonymous told me that Morton Thiokol was "coerced" into approving the launch, after the company's engineers voiced their objections. The source gave me three names. I reached two of the engineers and the wife of a third on the phone. Each confirmed the notion of a coerced launch approval. But none would consent to a detailed interview or on-the-record conversation.

I tried again over the next several weeks, getting a few more details but little substance. Three weeks after the launch, on Feb. 19, I headed to Brigham City, Utah, the town closest to Thiokol's remote plant. Many Thiokol workers lived in Brigham City and the town was taking the disaster hard. Vandals had scrawled the words "Morton Thiokol Murderers" on a railroad overpass on the road out to the Thiokol plant.

That same day, I huddled on the phone with NPR Science Editor Anne Gudenkauf and Correspondent Daniel Zwerdling. We decided to follow-up on my earlier leads, on new leads found in newspaper stories and in information Zwerdling developed in his own phone conversations with the wives of several Thiokol engineers. We knew that there was a bigger story out there that was still untold.

Zwerdling learned that one of the engineers who opposed the launch was sent to NASA's Marshall Spaceflight Center in Huntsville, Alabama. Zwerdling discovered the name of the hotel where the engineer was staying. He hopped on a plane for Huntsville.

In the meantime, Gudenkauf and I worked through a directory of Thiokol employees. We took the names we already had, and figured that the other engineers involved in the pre-launch meeting would have offices nearby. A list evolved of co-workers with office and phone numbers a few digits different. I matched the list to names in the Brigham City phone directory and began knocking on doors. Other reporters were on the same trail. Some doors had a dozen business cards tucked into them, from reporters all over the world.

This was in an era when NPR reporters did not have cell phones or laptop computers. Zwerdling and I worked independently, phoning in progress reports to editor Gudenkauf in Washington, when we could get to telephones. Neither of us knew it, but doors opened to each of us simultaneously. We heard many of the same details, including exact quotes. We listened to emotionally-charged accounts of a desperate and frustrating attempt to keep Challenger on the launch pad. Fearing for their jobs, neither engineer would permit us to record them, let alone name them.

That night, in a three-way conversation with Gudenkauf, we compared our astonishing notes. There were details no one else had yet revealed. A presidential commission was already investigating the Challenger disaster. But one of the engineers, a key player in the pre-launch debate, had not yet been contacted by the commission.

That engineer told me something that would later become symbolic of NASA's Challenger failures. He described the tense discussion about the cold temperatures forecast for the launch. The Thiokol engineers presented data about earlier low-temperature launches, including evidence of "blowby." To him and his colleagues, the message was clear: it was too cold to launch. At first, the Thiokol managers backed their engineers. They formally recommended that the launch be postponed.

The NASA officials on the line were perplexed. They were trying to establish the Space Shuttle as a regular and reliable means of conducting scientific and commercial missions in space. They had an ambitious launch schedule. Classrooms across the country were ready for the first science class taught from space. And in just a few days, during the State of the Union address, President Ronald Reagan was planning to mention Challenger's launch as a space program achievement.

NASA's Lawrence Mulloy reacted to the resistance this way: "My God, Thiokol. When do you want me to launch? Next April?" That turned the tide of the discussion. The Thiokol managers pressed their engineers to reverse themselves. When that failed, the managers simply overruled them, and submitted their own launch recommendation.

The next morning, two of the engineers told us, they fully expected Challenger to blow up at launch ignition. One of the engineers silently prayed during the countdown. At liftoff, with no explosion, he began to wonder whether he'd been wrong. The relief didn't last. Seventy-three seconds into the flight, as the spacecraft began an expected roll, the forces on the solid rocket motors began to pull one of them apart. The cold and stiff o-rings at one joint didn't flex and seal as designed. Searing hot gasses escaped. In an instant, the sky was filled with smoke and debris. The engineers were filled with grief. And as one later told Zwerdling, "...we all knew exactly what happened."