Accessibility links
Not Coming to a Theater Near You: Satire Trailers Bob Mondello looks at a new phenomenon that's been popping up on the web: people recutting footage from old movies and adding familiar music to suggest radically different films from the ones we know.

Listen
Not Coming to a Theater Near You: Satire Trailers

Can it be? Brokeback Mountain has spawned numerous spoofs. Jo Gay hide caption 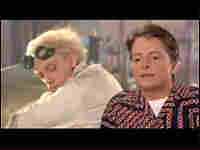 Marty McFly and Doc Brown's lines from Back to the Future are used to suggest a gay scientist and a student who is experimenting in a way director Robert Zemeckis did not have in mind in his trilogy. Universal Studios/Chocolate Cake City hide caption

Movie previews have a tough task. In roughly two minutes, they are supposed to establish what a two-hour movie will be like, conveying all its moods without giving away too much. Often, the preview will completely misrepresent what ends up on screen, and in some cases, that is the point. 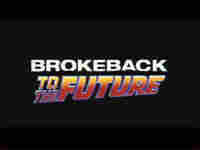 The classic trilogy Back to the Future was given a twist by students from Emerson College. To download, PC users: Right-click and select "save target as." Mac users: Control-click and "save link as." Chocolate Cake City hide caption

The Greeks Did It First

The Greeks used to end an evening of tragedy with what they called a "Satyr" play, a short farce that turned the tragedy inside out. The actor who'd just played a king — swallowing poison and dying, for instance — would now play a servant and swallow something that made him flatulent. It was the same basic idea, but tweaked to provoke knowing laughter. Which is, of course, what these spoof trailers do: provoke knowing laughter on the Internet, spread not by word of mouth, but by click of mouse. They prove once again that there's nothing new under the sun… or on Brokeback Mountain.

Brokeback to the Future, created by a comedy troupe at Emerson College, is at the crest of a wave of mock trailers circulating on the web, which manipulate the lines and images of familiar films to suggest vastly different plotlines. Instead of the story about Wyoming ranch hands Ennis Del Mar and Jack Twist, this preview highlights romantic tension between suburban time travelers Marty McFly and Doc Brown.

Brokeback is the most-satirized movie of the moment, with a nearly wordless, hyper-romantic preview that is easy to mimic. Brokeback Penguins, Brokeback Goodfellas, and the almost painfully obvious Top Gun: Brokeback Squadron, in which Tom Cruise and Val Kilmer do exactly what they did in the original...puffing out their chests, playing volleyball and exchanging lingering glares and glances.

But other movies are also being switched. Imagine a repositioned Taxi Driver, with Robert DeNiro's psycho killer now the hero of a slacker comedy, or Big, the flick about a little boy transformed into a man's body, revamped as a thriller.

This kind of thing is easy to do badly. But the mock trailers that started the current wave of creativity made it look like a snap. For a genre-switching contest, film editor Robert Ryang decided to turn the horror movie The Shining into just Shining, a bright family comedy starring that cuddly father-figure Jack Nicholson.

The music is doing a lot of the work in these re-cuts. All the best trailer-makers play with the fact that in the right circumstances, familiarity can breed confusion. Most Hollywood films fit so neatly into genres that a music cue is all it takes to position them. For example, in Shining, Peter Gabriel's "Solsbury Hill" immediately conveys an uplifting feeling.

Hollywood editors with time on their hands have probably been playing this sort of prank for ages to amuse their friends. But the digital revolution allows anyone with a computer and a video-editing program to join in.