Accessibility links
'Partial-Birth Abortion': Separating Fact From Spin The Supreme Court's decision to consider the constitutionality of the Partial-Birth Abortion Ban Act has pushed the issue into the spotlight. How did the term originate and why is it so controversial? 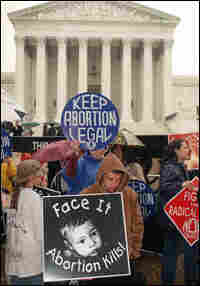 Protesters demonstrated outside the Supreme Court in 2000, when the court last considered the issue of "partial-birth" abortion. The court plans to take up the issue again by weighing the constitutionality of the Partial-Birth Abortion Act. Getty Images hide caption

The Supreme Court's decision to consider the constitutionality of the Partial-Birth Abortion Ban Act has once again pushed the abortion issue into the spotlight.

The law, which was signed by President Bush in 2003 after an eight-year-long congressional fight, prohibits doctors from knowingly performing a "partial-birth abortion," a procedure it defines as one in which the person performing the abortion "deliberately and intentionally vaginally delivers a living fetus until, in the case of a head-first presentation, the entire fetal head is outside the body of the mother, or, in the case of breech presentation, any part of the fetal trunk past the navel is outside the body of the mother."

But "partial-birth" is not a medical term. It's a political one, and a highly confusing one at that, with both sides disagreeing even on how many procedures take place, at what point in pregnancy, and exactly which procedures the law actually bans.

1992: Dr. Martin Haskell presents a paper on a late-term abortion method known as dilation and extraction, or D&X, at a meeting of the National Abortion Federation.

1993: The National Right to Life Committee obtains Haskell's paper, publicizes it and begins a campaign to outlaw the procedure.

November 1995: The Partial-Birth Abortion Ban Act passes in the House of Representatives for the first time, 288-139.

June 2000: In Stenburg v. Carhart, the Supreme Court rules that the Nebraska ban against so-called "partial-birth" abortions should be overturned because the statute doesn't provide an exception for the health of the mother. The ruling invalidates similar laws in 29 out of 31 states.

July-March 2002: The House of Representatives passes a revised version of the Partial-Birth Abortion Ban Act. The Senate passes a version, too.

Nov. 5, 2003: The Partial-Birth Abortion Ban Act is signed into law by President Bush. The National Abortion Federation challenges the law in court, and blocks the enforcement of the law for its members.

June 2004: In Planned Parenthood v. Ashcroft, a federal district judge in California strikes down the law because of the "undue burden" it places on the woman and her health, and the vague language contained in it.

August 2004: In NAF v. Ashcroft, a New York district judge deems the law unconstitutional because it does not contain exceptions protecting a women's health.

July 2004: In Carhart v. Gonzales, three judges of the 3rd U.S. Circuit Court of Appeals unanimously agree that "because the Act does not contain a health exception, it is unconstitutional."

September 2004: In Carhart v. Ashcroft, U.S. District Judge Richard Kopf of Nebraska concludes that, "in the absence of an exception for the health of a woman, banning the procedure constitutes a significant health hazard to women."

So to better understand the facts behind the controversy, we asked NPR health correspondent Julie Rovner to explain the origins of both the name and the procedure.

Where does the term "partial-birth" abortion come from?

The term was first coined by the National Right to Life Committee (NRLC) in 1995 to describe a recently introduced medical procedure to remove fetuses from the womb. Alternately known as "dilation and extraction," or D&X, and "intact D&E," it involves removing the fetus intact by dilating a pregnant woman's cervix, then pulling the entire body out through the birth canal.

After a physician presented a paper at a conference of the National Abortion Federation describing the new procedure, the NRLC commissioned drawings to illustrate it and published them in booklet form, as well as placing them as paid advertisements in newspapers to build public opposition. In an interview with The New Republic magazine in 1996, the NRLC's Douglas Johnson explained that the term was thought up in hopes that "as the public learns what a 'partial-birth abortion' is, they might also learn something about other abortion methods, and that this would foster a growing opposition to abortion."

In 1995, Rep. Charles Canady (R-FL) included the term as part of a bill he proposed that would make it a federal crime to perform a "partial-birth" abortion. (That year, the Ohio state legislature also passed the first state ban, but it was struck down by a federal district court; the Supreme Court later refused to hear an appeal.)

If this procedure is so controversial, then why was it developed in the first place?

The further along a pregnancy is, the more complicated — and the more controversial — the procedures are for aborting it. Abortions performed after the 20th week of pregnancy typically require that the fetus be dismembered inside the womb so it can be removed without damaging the pregnant woman's cervix. Some gynecologists consider such methods, known as "dilation and evacuation," less than ideal because they can involve substantial blood loss and may increase the risk of lacerating the cervix, potentially undermining the woman's ability to bear children in the future.

Two abortion physicians, one in Ohio and one in California, independently developed variations on the method by extracting the fetus intact. The Ohio physician, Martin Haskell, called his method "dilation and extraction," or D&X. It involved dilating the woman's cervix, then pulling the fetus through it feet first until only the head remained inside. Using scissors or another sharp instrument, the head was then punctured, and the skull compressed, so it, too, could fit through the dilated cervix.

Haskell has said that he devised his D&X procedure because he wanted to find a way to perform second-trimester abortions without an overnight hospital stay, because local hospitals did not permit most abortions after 18 weeks.

How often is the D&X procedure performed?

According to the Alan Guttmacher Institute, an abortion-rights research group that conducts surveys of the nation's abortion doctors, about 15,000 abortions were performed in the year 2000 on women 20 weeks or more along in their pregnancies; the vast majority were between the 20th and 24th week. Of those, only about 2,200 D&X abortions were performed, or about 0.2 percent of the 1.3 million abortions believed to be performed that year.

Under what health circumstances are D&X abortions performed?

There is currently no statistical information available on why "dilation and extraction" abortions are performed.

In a widely-publicized interview with The New York Times in 1997, Ron Fitzsimmons, executive director of the National Coalition of Abortion Providers, estimated that in the majority of cases, the procedure is performed on a healthy mother and healthy fetus that is 20 weeks or more along in development.

Yet the procedure is also performed in cases where the woman's health is at risk, or when the fetus shows signs of serious abnormalities, some of which don't become apparent until late in pregnancy.

Take, for example, cases in which the fetus develops hydrocephalus (commonly known as water on the brain). Often undetectable until well into the second three months of pregnancy, the condition causes enlargement of the skull up to two-and-a-half times its normal size. It not only results in severe brain damage to the fetus, it can also create severe health risks to the mother if she tries to deliver it vaginally.

Some doctors say D&X abortion is a preferable method for ending such pregnancies without damaging the woman's cervix. Those in the anti-abortion camp, however, argue that the procedure is never medically necessary, noting that enough fluid can be drained from hydrocephalus babies in the womb to ensure a safe delivery.

Indeed, many abortion opponents believe even severely deformed fetuses should be delivered regardless of their prospects for a healthy life.

"We don't believe that sick babies — babies with disabilities — should be pulled out by the legs and struck through the head," Right to Life's Johnson told The New Republic. "We believe they should live out their life — whether it's a few minutes or six hours."

Are there any alternatives to these procedures?

Sometimes. Labor can be induced, or the fetus can be removed by caesarian section in some cases.

Has the Supreme Court weighed in on this issue before?

Yes. In the year 2000, the court struck down a Nebraska law banning any abortion procedure that "partially evacuates fetal material through the cervix into the birth canal."

By a 5-4 ruling, the majority in Stenberg v. Carhart said Nebraska's ban was unconstitutionally vague and lacked a needed exception allowing the procedure to be used to protect the health of the pregnant mother.

How does all this relate to the larger abortion debate?

Activists on both sides of the issues see the constitutionality of the Partial-Birth Abortion Ban Act as pivotal to the larger debate. Abortion-rights backers say the ban is a first step toward trying to outlaw all abortions. Even some supporters of the ban say that if it is upheld, they could then move on to try to outlaw the far more common D&E procedure, whose description is nearly as unpleasant as that of the D&X.

The court could also use the law to address the "health" exception currently required for all abortion restrictions. Abortion foes say the current health exception upheld by the court is so broad — encompassing mental health problems as well as physical ones — that just about any abortion-procedure ban would have to be invalidated. But abortion-rights supporters say that without a health exception, women could be forced to carry to term fetuses with no chance at life, but whose birth could leave the pregnant women unable to carry a later pregnancy, or could exacerbate serious ailments such as diabetes.