Accessibility links
Octavia Butler: Eye on the Stars, Feet on the Ground Novelist Octavia Butler died this week at age 58. She was the first black woman to succeed in the science fiction genre. She was a private person who loved good conversation.

Listen
Octavia Butler: Eye on the Stars, Feet on the Ground 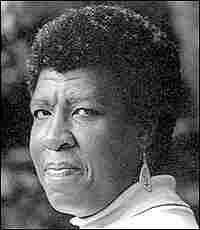 Novelist Octavia Butler died this week at age 58. She was the first black woman to succeed in the science fiction genre. She was a private person who loved good conversation. 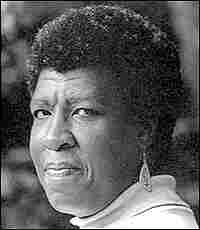 This essay was originally published on NPR.org in August 2001, in conjunction with the UN-sponsored World Conference on racism.

Several years ago, when I was about to start a novel, I thought I might get some mileage out of the idea of a civilization in which people somehow felt -- that is, they shared -- all the pain and all the pleasure they caused one another.

The point was to create, in fiction at least, a tolerant, peaceful civilization -- a world in which people were inclined either to accept one another's differences or at least to behave as though they accepted them since any act of resentment they commit would be punished immediately, personally, inevitably. Eventually, though, I chose not to write about such an empathic society. I wrote instead about a single empathic woman who suffered from the delusion that she shared other people's pleasure and pain. She was not a particularly peaceful woman, but she did have to consider the consequences of her behavior more than other undeluded people had to. After all, delusional pain hurts just as much as pain from actual trauma. So what if it's all in your head?

In my novel, unavoidable empathy worked fine as an affliction, but popular, painful sports like boxing and football convinced me that the threat of shared pain wouldn't necessarily make people behave better toward one another. And it might cause trouble. For instance, it might stop people from entering the health care professions. Nursing would become very unpopular. And who would want to be a dentist in such a society.

So much for fiction. But in real life, what would make us more tolerant, more peaceful, less likely to need a UN Conference on Racism?

I say that, remembering childhood, remembering the schoolyard, remembering being a perennial out-kid. At school I was always taller than the rest of my class, and because I was an only child I was comfortable with adults, but shy and awkward with other kids. I was quiet, bookish, and in spite of my size, hopeless at sports. In short, I was different. And even in the earliest grades, I got pounded for it. I learned that five- and-six-year-old kids have already figured out how to be intolerant.

Granted, I speak from my own experience, but it's a familiar experience to anyone who remembers the schoolyard. Of course, not everyone has been a bully or the victim of bullies, but everyone has seen bullying, and seeing it, has responded to it by joining in or objecting, by laughing or keeping silent, by feeling disgusted or feeling interested....

Simple peck-order bullying is only the beginning of the kind of hierarchical behavior that can lead to racism, sexism, ethnocentrism, classism, and all the other "isms" that cause so much suffering in the world.

Several years ago I wrote a novel called Dawn in which extra-solar aliens arrive, look us over, and inform us that we have a pair of characteristics that together constitute a fatal flaw. We are, they admit, intelligent, and that's fine. But we are also hierarchical, and our hierarchical tendencies are older and all too often, they drive our intelligence-that is, they drive us to use our intelligence to try to dominate one another.

But whatever is the source of our intolerance, what can we do about it? What can we do to improve ourselves? Of course, we can resist acting on our nastier hierarchical tendencies. Most of us do that most of the time already. And we can make a greater effort to teach children to resist their hierarchical impulses and beliefs and to channel what they can't resist into sports and careers.

Will this work? Well, it hasn't so far. Too many people will not, perhaps cannot, do it. There is, unfortunately, satisfaction to be enjoyed in feeling superior to other people.

Back during the early 1960s there was a United Nations television commercial, the audio portion of which went something like this: "Ignorance, fear, disease, hunger, suspicion, hatred, war." That was it, although I would have added, "greed" and "vengeance" to the list. All or any of these can be the catalyst that turns hierarchical thinking into hierarchical behavior. Amid all this, does tolerance have a chance?

Only if we want it to. Only when we want it to. Tolerance, like any aspect of peace, is forever a work in progress, never completed, and, if we're as intelligent as we like to think we are, never abandoned.