Accessibility links
Shared Values Tie Social Conservatives to Bush "Social conservatives" are among the voters most loyal to President Bush. Almost all Republican, mostly women and substantially more conservative on social issues than the rest of the population, they represent 11 percent of Americans over 18. 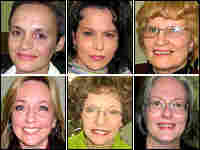 Even as President Bush's numbers sag elsewhere, a group of voters identified as "social conservatives" remain faithful to the president.

These voters make up about 11 percent of Americans over age 18. They are almost all Republican, mostly women, and substantially more conservative than the rest of the population on issues such as gay marriage.

In Plant City, a farming community in central Florida, many residents fall into this voting typology. These voters say that, despite some disagreements with the president's policies, it is their shared values — and shared faith — that keeps them Bush loyalists.

BASIC DESCRIPTION: While supportive of an assertive foreign policy, Social Conservatives are somewhat more religious than Enterprisers. (Enterprisers are defined as an extremely partisan Republican group whose politics are driven by a belief in the free enterprise system, with social values that reflect a conservative agenda). In policy terms, Social Conservatives break from the Enterprisers in their cynical views of business, modest support for environmental and other regulation, and strong anti-immigrant sentiment.

DEFINING VALUES: Conservative on social issues ranging from gay marriage to abortion. Support an assertive foreign policy and oppose government aid for the needy, believing people need to make it on their own. Social Conservatives are strongly worried about the impact of immigrants on American society. They're more middle-of-the-road on economic and domestic policies, expressing some skepticism about business power and profits, and some support for government regulation to protect the environment. While not significantly better-off than the rest of the nation, most Social Conservatives express strong feelings of financial satisfaction and security.

* Homosexuality is a way of life that should be discouraged by society:

* The growing number of newcomers from other countries threatens traditional American customs and values:

* Poor people today have it easy because they can get government benefits without doing anything in return:

* Business corporations make too much profit:

WHO THEY ARE: Predominantly white (91 percent), female (58 percent) and the oldest of all groups (average age is 52; 47 percent are 50 or older); nearly half live in the South. Most (53 percent) attend church weekly; 43 percent are white evangelical Protestants (double the national average of 21 percent).

LIFESTYLE NOTES: 56 percent have a gun in their home, and 51 percent attend Bible study groups.

MEDIA USE: Half of all Social Conservatives cite newspapers as a main source of news; the Fox News Channel (34 percent) and network evening news (30 percent) are their major TV news sources.

Read the Pew Research Center's findings on voting typologies and changes in the American electoral landscape following the 2004 election.