Accessibility links
Fats Domino, 'Alive and Kickin' After Katrina The New Orleans music legend nearly perished and his home was heavily damaged in the aftermath of Hurricane Katrina. But his latest record looks toward the future with optimism. 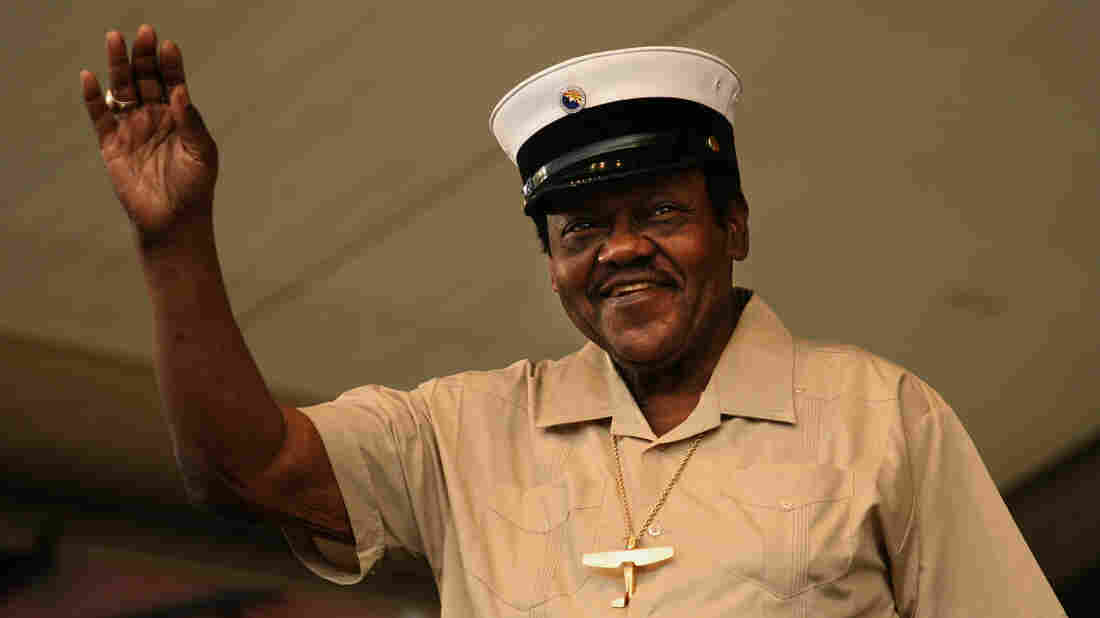 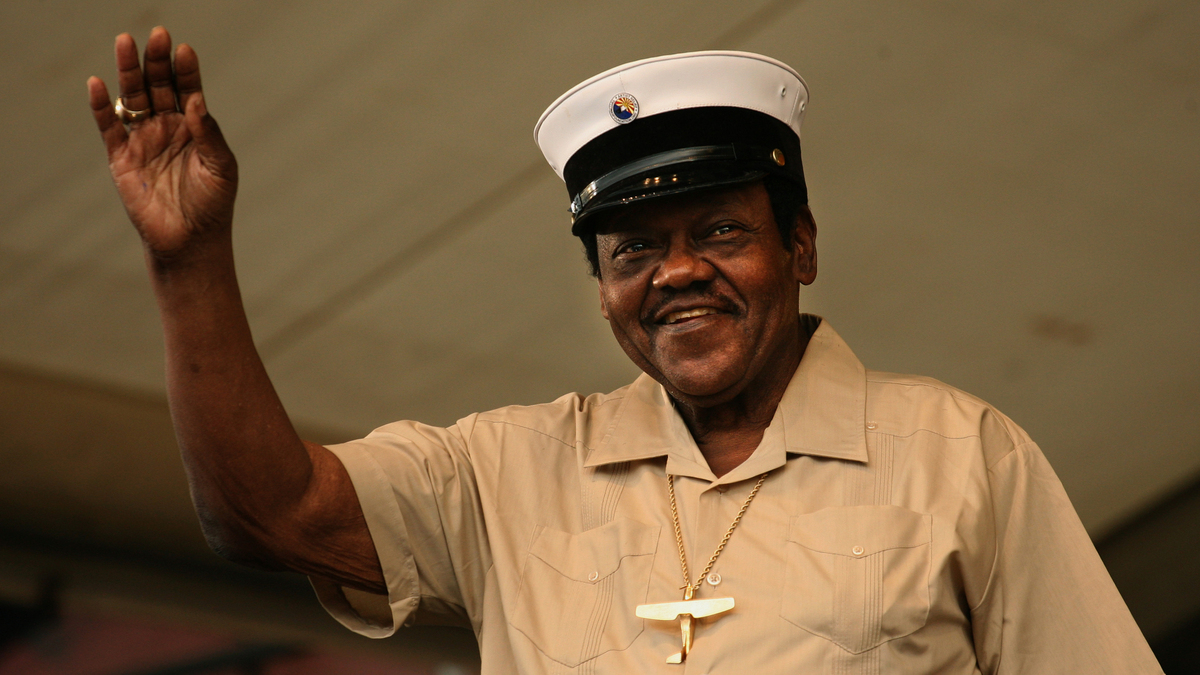 Fats Domino at the New Orleans Jazz & Heritage Festival in May 2006.

Fats Domino died Oct. 24, 2017 at the age of 89. NPR's Robert Siegel recorded this conversation with him just over a decade earlier, when the music legend and his hometown were still recovering from Hurricane Katrina.

The other week in New Orleans I got to sit down with a legendary lifelong resident of the Lower Ninth Ward.

Fats Domino isn't very talkative nowadays, but you wouldn't call him understated either. He's 78 and he came to our interview looking dapper in a white cap with a bill, a hat befitting a yachtsman. He wore a gold medallion around his neck, and on his wrist a pocket watch and a bracelet joined together into one great, gold timepiece. He sat at a piano, which he warned me he would play very little.

Fats Domino, Architect Of Rock And Roll, Dead At 89

"According to how I feel," Domino said. "If I drink wine I feel fine. I might make up my mind and give you something."

Alive and Kickin' is the title of Domino's new album, which is interesting for a couple of reasons. First, he is donating the proceeds from sales of the album to the Tipitina's Foundation. Tipitina's is a renowned New Orleans music club, and the foundation is dedicated to preserving and restoring the musical culture of New Orleans. And second, a lot of the lyrics sound like they should have been written post-Hurricane Katrina, even though they weren't. He says even before the storm, people were asking what had happened to him.

"Several times people would say, what happened to Fats, you know," he says. "And I just thought about it, if you will, and did the song. Finally, I did: I'm alive and kickin'."

For half a century, Antoine "Fats" Domino has been making music in New Orleans. It used to be called rhythm and blues until the mid-1950s when people started calling it rock and roll.

"I think the beat made them start calling it rock and roll," Domino says. "They started playing it faster, you know."

One of Domino's most famous recordings, the jazz standard "My Blue Heaven," was released in 1956 — but it's a much older song. And with lines like "when evening is nigh," it's not like one of his own lyrics. Those tend to be rhyming scraps of everyday conversation: "You made me cry when you said goodbye;" "I'm walking, yes indeed, and I'm talking." And after all these years he's still at it. 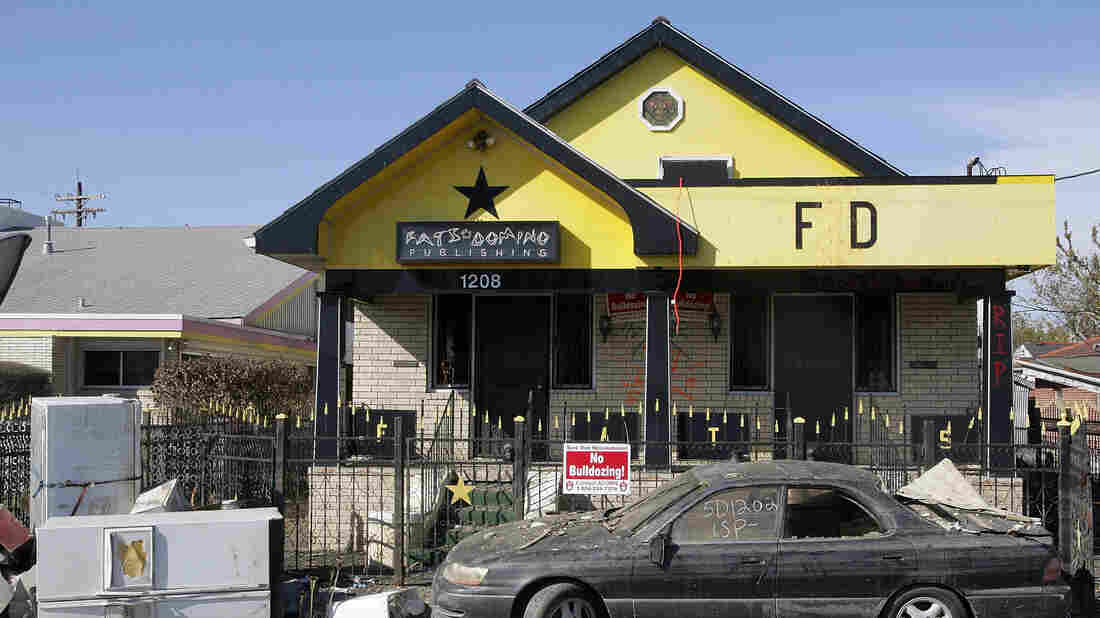 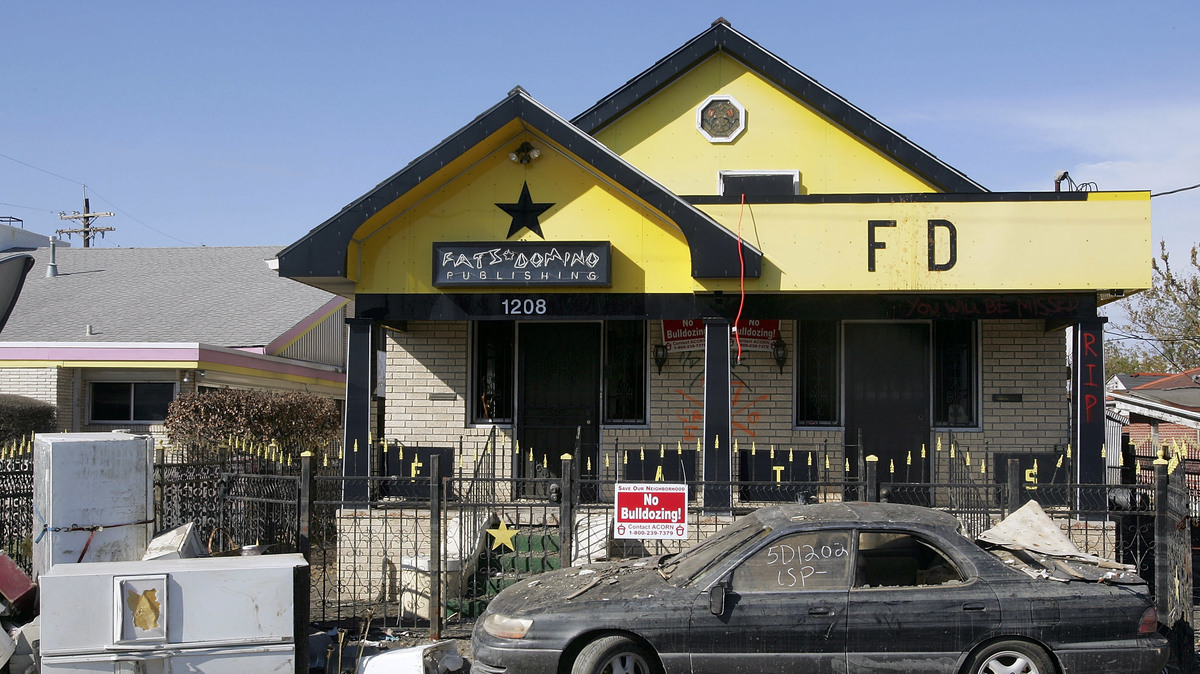 The damage outside Fats Domino's home in the Lower Ninth Ward of New Orleans four months after Hurricane Katrina.

The house that Domino was airlifted out of in the Lower Ninth Ward is just a few blocks from the house where he grew up. He is from New Orleans and of New Orleans and he is still in New Orleans, but his neighborhood is still uninhabitable, so he's temporarily living on the west bank of the Mississippi.

"I ain't too far from [my neighborhood]," he says. I'm going to wait it out. I'll be there pretty soon, I hope. I don't think I'll leave the Ninth Ward."