Accessibility links
Ping Fu: Re-Creating The World In All Its Dimensions Ping Fu has spent decades envisioning new uses for computers. Now she thinks she's really on to something: a technology that can scan 3-D objects, re-creating them virtually — and in the real world.

Listen
Ping Fu: Re-Creating The World In All Its Dimensions 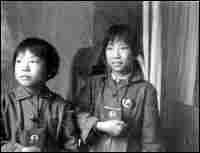 Ping Fu with her younger sister, Hong, pictured in 1969. Red Guard soldiers once threw Hong into a pond to drown. Ping jumped in and pulled her out, so the soldiers punished her by beating and raping her. She was 10. Courtesy Ping Fu hide caption 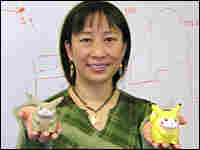 Ping Fu holds two Pikachu dolls. The one on the left was the first object ever created using Geomagic's technology, based on a scan of the doll on the right. Kathy Schalch, NPR hide caption

Hear Fu describe how the Pikachu doll was created using an inkjet printer. 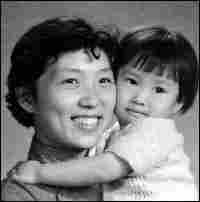 Ping Fu, pictured in 1961 with the aunt who raised her. hide caption

You may have never heard of Ping Fu. But chances are her work has touched you in some way. Fu has spent decades envisioning new uses for computers. Now she thinks she's really on to something: a technology that can scan three-dimensional objects, re-creating them first virtually, and then in the real world.

Fu once lead a research team at the National Center for Supercomputing Applications. One of the graduate students she hired was Mark Andreesen, who went on to create the Netscape Web browser. She also worked on the film Terminator 2, developing a way to bring to the screen the robot villain's signature trick — melting into liquid metal and then morphing into a new shape.

Fu grew up in China, and between the ages of 8 and 18, she never set foot in a classroom. It was the time of the Cultural Revolution, and educated people, like Ping's parents, were condemned and exiled; many were killed. Children like Ping and her sister were left behind and forced to atone for their parents' sins. They were starved and made to denounce themselves. Fu recalls that she used to be forced to say, "I'm a bug. My life is worthless."

Soldiers from the Red Guard once threw Ping's little sister into a pond to drown. Ping jumped in and pulled her out, so the soldiers punished her by beating and raping her. She was 10.

Schools reopened when Fu was 18. She studied journalism and spent two years investigating rumors that China's one-child policy was prompting couples to kill their baby girls. Fu's student project got picked up by the People's Daily. It quickly became a story outside of China, too, drawing condemnation from human rights advocates. The story party officials had once praised became an embarrassment. Fu was thrown in prison.

"I was preparing to die," Fu says of that time, "and then I was given a chance to live."

Fu was ordered to leave China and never return. In a way, she thinks these hardships have helped her in her new life as a high-tech entrepreneur by putting risk-taking in perspective. (In December, INC Magazine named Fu entrepreneur of the year.)

Fu came to American in 1982 and co-founded her company, Geomagic, in 1996. It is headquartered in a non-descript building in North Carolina's Research Triangle Park. The company's products enable designers and engineers to scan a 3-D object, capture the data from the scan and then use it to create highly accurate digital models.

Applications engineer Rob Black demonstrates how Geomagic's technology — called digital shape sampling and processing — works. He picks up a small turbine blade from an aircraft engine, sets it on a circular plate, and rotates it under an optical scanner. Then he swivels his chair around and taps a few keys on a computer. An image pops onto the screen — a ghost-like image of the blade entirely made of dots, millions of points in virtual space. Next, Black connects the dots. With a few more keystrokes, he digitally "shrink wraps" the image, smoothing out the surface to generate an exact copy in cyberspace.

Virtual 3-D images can be inspected, redesigned and tested, and used to manufacture perfect replicas. NASA has begun using Geomagic's software to precisely replicate damaged space shuttle tiles on Earth while the shuttle is still in orbit. The technology allows NASA to test how well shuttles will withstand the heat and stress of re-entering the atmosphere. Automotive and aerospace manufacturers are using the technology to engineer precision parts. A company called Invisiline is using it to manufacture plastic braces.

Fu says doctors will soon use the technology to custom-make prosthetic joints and other medical devices that fit and function better. And eventually, she predicts, even clothes and shoes will be made-to-order this way. She calls this "mass customization" and says it will make today's mass production obsolete. Stores stacked to the ceiling with blue jeans will seem quaint — even silly, she says.

Inc.com: Entrepreneur of the Year -- The Dimensions of Ping Fu
Geomagic's Web Site