Accessibility links
Arctic Monkeys in Concert With just one album under the their belt, the British group Arctic Monkeys is already being hailed as one of the greatest U.K. rock bands of all time. The group aimed to show fans why in a full performance recorded live from Washington, DCs 9:30 Club. 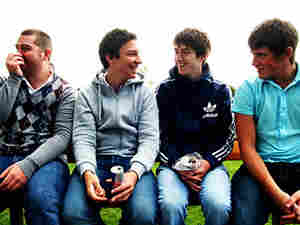 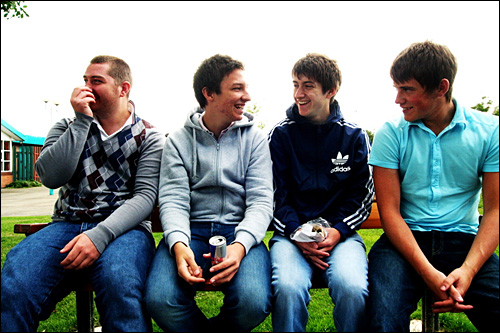 With just one album under the their belt, the British band Arctic Monkeys is already being hailed as one of the greatest U.K. rock groups of all time. The band aimed to show fans why with an electrified performance, originally webcast live on NPR.org from Washington, DC's 9:30 Club March 27.

With obvious influences from bands like The Clash and The Smiths, Arctic Monkeys have a blistering, guitar-heavy sound with infectious melodies and lyrical swipes on small-town life, teen angst and the music industry.

Fans have responded, making the quartet from Sheffield nothing short of a phenomenon. The band's one and only album, Whatever People Say I Am, That's What I'm Not, debuted at number one on British charts in January, selling more copies than all the other top-20 albums combined.

The UK music magazine New Musical Express calls the Arctic Monkeys' CD one of the top five British rock albums of all time.

"What's happened has been proper hysterical," says lead singer and guitarist Alex Turner. "If I say 'phenomenon' it sounds like I'm right up my own arse, but we'd be daft to act like we didn't realize how incredible the last year's been. When it all started we were like 'what's going off here?'"

"Before the hysteria started, labels would say 'I like you, but I'm not sure about this bit, and that song could do with this changing.' We never listened, says Turner. "And once it all kicked off we didn't even worry about it anymore. In London, the kids were watching the band and the record company were at the back watching the kids watching the band.

"We had people crowd-surfing and landing on monitors. In Manchester this kid came flying over the crowd and his cheek just smashed on the side of the stage. Another kid came over and just rolled across, a perfect land like a gymnast. But best is when everyones just bouncing."