Accessibility links
Beastie Boys, Filmed in Concert: 'I... Shot That!' You may know them as Mike D, MCA, and Ad-Rock. Or as Michael Diamond, Adam Yauch, and Adam Horovitz. Or simply, the Beastie Boys. For their new concert film, Awesome; I... Shot That!, they gave cameras to their fans in the crowd. 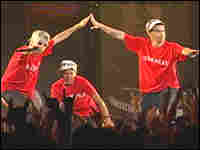 On stage, in a rage: The Beastie Boys. ThinkFilm hide caption

Trailer: 'Awesome' at MySpace
Videos at You Tube 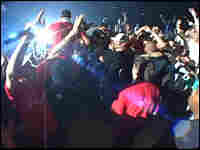 Into the Crowd: A scene from Awesome; I F*****' Shot That!. ThinkFilm hide caption

To film the Beastie Boys' new concert movie, Awesome; I... Shot That!, fans at a concert at Madison Square Garden received 50 cameras. 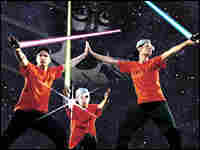 Detail from the poster for Awesome; I F***in' Shot That!. ThinkFilm hide caption

Awesome, described as "an authorized bootleg," includes more than a thousand edits, as footage was spliced together to give an omniscient view of a Beastie Boys concert. The Hi-8 cameras capture the scene as the rappers tear through a 24-song set.

From standard stage shots to multiple visions of a crowd going wild, the images flow with the music, forming a pastiche that's not unlike the sampled, tweaked beats of hip-hop.

In the concert, Mike D, MCA, and Ad-Rock — who go by Michael Diamond, Adam Yauch, and Adam Horovitz when they're not rhyming — are backed by Mix Master Mike, Keyboard Money Mark and percussionist Alfredo Ortiz. The set also includes an appearance from rapper Doug E Fresh.

Awesome had its premiere at the recent Sundance Festival. The film's director is listed as Nathaniel Hornblower — the nom de cine of Adam Yauch, aka MCA. It's the first full-length film for Yauch, who created much of the art and video associated with the group.

The Beastie Boys have been making music since the early 1980s, and their catalog includes party songs like "(You Gotta) Fight For Your Right (to Party)" and "Brass Monkey," which is performed in the concert film.

In the '90s, even as they made hits like "Sabotage," the Beastie Boys became politically active, with Yauch organizing the Tibetan Freedom Concert to raise awareness of human rights issues on the Chinese border. They've been vocal opponents of the war in Iraq as well.