Accessibility links
Joplin's Ragtime Style Lives on in Print and Song Scott Joplin was once among America's most popular songwriters. The son of a former slave, his Ragtime music swept the nation more than 100 years ago.

Listen
Joplin's Ragtime Style Lives on in Print and Song 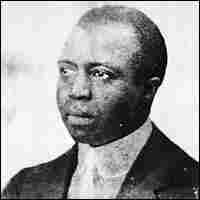 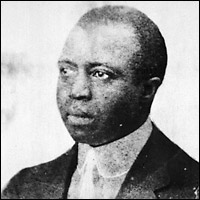 Both of these Maple Leaf Rag recordings are made from piano rolls released in 1916. The edited roll was published by Connorized, and the unedited version by the Aeolian Company.

Scott Joplin was once among America's most popular songwriters. The son of a former slave, the composer's Ragtime music swept the nation more than 100 years ago.

Joplin's house in St. Louis is thought by some to be haunted. A visit to the home inspired author Tananarive Due to write her latest book, Joplin's Ghost.

Due's book brings Joplin into the present as a ghost that is haunting a young R&B singer — a woman who has already survived a crushing encounter with an antique piano.

For those seeking a more concrete connection with Joplin, there are still piano rolls holding his compositions. The composer would have played a piano that punched tiny holes in rolls of paper. When fed into a player piano, the rolls re-create music from Joplin's era, and maybe even his own hand.

St. Louis music collector Trebor Tichner has collected Joplin rolls, but it would be hard to prove that Joplin actually made the piano rolls that bear his name.

One roll in Tichner's collection, however, is likely to have been produced by Joplin's own hand. The playing on the 1916 roll in question is poor, and it's well-known that Joplin was a better composer than he was a player. 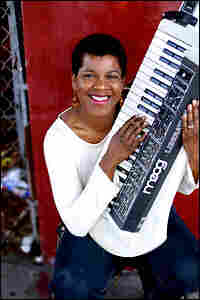 Author Tananarive Due is an American Book Award winner who has written seven books, ranging from supernatural thrillers to a civil rights memoir. Tananarive Due hide caption

The new arrival wheeled himself through the day room of Manhattan State Hospital on Ward's Island, whispering to his dead wife, who always walked beside him. The man had outlived one wife and his baby girl—pure bad luck, his first wife had called him. His second wife, Freddie, was the only one of the dead who still enjoyed his company.

He was talking to her, as he often did, about the stage set he was going to build as soon as he was able: murals of cloud banks, majestic live oaks and a sea of ripening corn-stalks. Talking to Freddie was like walking onto the stage itself, standing in the stare of a footlight. The light filled him with wonder, and wonder was hard to come by these days.

But Freddie's voice interrupted him so loudly that he wondered why the droop-jawed attendant in the doorway didn’t call for them to hush that racket near so many insane and dying.

There it is, Scott, Freddie said, quivering his ear. There–do you see?

Scott Joplin gazed around the room, where the streaked windows invited in an awful dead winter sun that stole more than it gave. Institutional wooden chairs circled a scuffed old table that offered two checkerboards but no checkers, beside a Graphophone with a working motor but no needle to play the cylinders. A sobbing younger man sat cross-legged on the floor, his nest of privates in plain view from a hollow in his thin, urine-stained gown. Why would Freddie wrest him away from his beautiful setting to bring him back to this lunatic's meeting hall?

Do you see it? Freddie, as always, was persistent.

Then, he did see it: An upright piano stood against the far wall. Scott's eyes had missed it before because it was in a shadowed corner, nearly invisible in the room's bland light. It was his rosewood Rosenkranz, the piano he had found in the alleyway when he could still stand and walk. The piano he had played for Freddie during her dying days. Scott blinked, sure it was a trick of his imagination. One always must be on guard against one's imagination, he remembered. "Did you do this somehow, Freddie?" Scott said. At Bellevue, his last home, he’d been forced to live without a piano within reach for the first time in memory. But here he was in a new place -- a worse place, one step closer to oblivion -- and his own piano was waiting for him.

Another hallucination, then. It wasn't the first, and wouldn’t be his last, or so his doctors said. Every day held another bizarre surprise. But this hallucination was more stubborn than most. Scott flopped his arms against the wheels of his wheelchair, making slow progress across the room, and the piano remained in place. Closer, now. And closer again.

"I'll be damned," he said, panting from his effort.

Scott reached out his trembling hand. Although his wrist dangled as if it were broken, he was able to press a single key. High G. No hallucination could sound so sweet.

The single, delicate note awoke the memory of being at Lessie Mae's on Main Street in Sedalia, waiting quietly in the wings while Happy Eddie or Mo the Show clowned on the piano with acrobatic fervor for the hooting crowd. Those boys played like carnival performers, drawing men’s purposeful eyes away from bold cleavage and half-empty glasses of whiskey. When it was Scott's turn to play, Lessie Mae always waved at him with her damp pink handkerchief from behind the cash register, her mark of approval. Go on, Scotty–TEACH 'em, professor!

When he played, the carnival ended. A concert began.

"Music’s swell. You play?" the sanitarium attendant said to Scott.

Scott nodded slowly. He did everything slowly now. "Used to," he said. His voice was a sick old man's, and he wasn't yet forty-nine. He couldn't always remember his age, but the sight of the burnished piano had brightened his mind. Brightened every part of him.

"Go on ahead and take five minutes, then. They say a lady donated it to the hospital in a patient’s name. Mind you don’t break it."

Break it! That was a stupid thing to say. The woman who sent it was my wife, you fool. Don’t you know who I am? Scott thought. But that was the point, wasn't it? He was the only one who knew, and the occasional ability to forget was the only part of his illness he enjoyed. Lottie had said she'd have a surprise for him when she came to see him this Friday, but she'd never said she was sending the piano after him. God bless Lottie again.

But this piano would have followed you whether Lottie sent it or not, Scott thought, and such thoughts didn't disturb him the way they used to. Accepting the state of things had made his days easier. The Rosenkranz would follow him anywhere he went. He had found the Rosenkranz in the alley and wiped it clean with his own hands, and the Rosenkranz wouldn't forget.

"I think I will play," Scott said. His tongue was useless anymore, and his words had sounded like ayethinnniwillplayyyy, a mouthful of oatmeal.

He hadn't let anybody except Lottie hear him play a piano in two years, since that show in D.C. where they had practically pushed him on the stage. What could he have done? Sounded like a little child. That’s what he heard Eubie Blake said.

Scott's wheelchair was too low for him to reach the keyboard comfortably, so he hoisted himself into the mismatched chair at the piano's knees, another labor that took his breath. The attendant steadied him, but Scott had moved out of his chair by himself, so he wasn't helpless. For a moment, Scott felt bewildered as he stared at his hands, shivering claws against the keys. His skin didn't smell right either; urine and talcum and something else buried beneath it all, something sickly that could only be Death. That smell was everywhere here.

Copyright © 2005 by Tananarive Due. Excerpt reprinted by permission of the author.