Accessibility links
Thembi Ngubane: Behind, Beyond the Audio Diary For about a year, Thembi Ngubane, then 19, kept an audio diary, chronicling her life with AIDS. Ngubane discusses why she decided to participate in the project – and what she's been up to since.

Thembi Ngubane: Behind, Beyond the Audio Diary

Thembi Ngubane: Behind, Beyond the Audio Diary 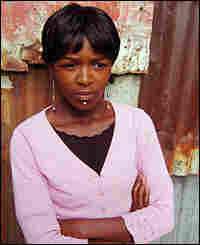 For a little more than a year — from October 2004 to December 2005 — Thembi Ngubane, then 19, kept an audio diary, chronicling her life with AIDS. NPR caught up with the young South African woman a few days prior to the broadcast of her audio diary on All Things Considered to talk to her about the project. She was in New York — on her first trip to the United States, after her first trip on an airplane — and will be traveling across the United States to speak about her story and her experience.

Visit the Radio Diaries Web site to see Thembi Ngubane's scrapbook and photographs from her township and of her family. The site also offers an AIDS action toolkit, more resources on AIDS in South Africa and details on where you can hear Ngubane speak during her U.S. tour.

In a conversation punctuated by much laughter and some quiet moments, Ngubane discussed why she decided to participate in the project — and what she's been up to since it concluded.

Q: Why did you decide to participate in the audio diary project? Was it a difficult decision to make?

No, I didn't think it was going to be difficult, so I just said, "Yes." I was kind of curious about carrying a tape recorder and recording, and also hearing my voice when the tape plays. I wanted to experience that moment with me and the tape recorder. I had never had a diary before. So I just thought, "OK, why not? It is going to be fun."

Q: Did you have any training with the tape recorder?

No, I didn't have any training. There was a time along the way when I thought, "No, this is bad," and I didn't want to do it anymore. I would record what I wanted to record, and [producer Joe Richman] would call and say, "Record some more." And then I would be like "Oh my god, do I have to do this every day?" I just wanted to quit.

Q: What did you hope to accomplish by keeping an audio diary?

I wanted to reach other young people who are also infected with HIV, who are hiding, who are afraid to come out and disclose their status. I thought that I would be affecting someone's life, helping some person who maybe has not disclosed his status or some person who has not been tested.

Q: In your audio diary, you talk about this idea of people who are "hiding." For a long time, you weren't so open about your own HIV/AIDS because people would "stare and point." Has that changed for you now? How did it feel to be talking very openly about these kinds of issues?

At first I didn't feel comfortable talking about it. But my family already knew — except for my father — and by the time I got sick, my community members suspected, so every time I went to the clinic, they all started to stare and started to point and started to give names. So I just thought to myself, "What the hell," because I am hiding and they can see it. I don't think anyone can hide the sickness.

Q: Was there anything you learned about yourself — or that surprised you — while you were keeping an audio diary?

Keeping the diary made me believe that I can do things on my own... because that is me in that diary. I didn't have to fake anything — it is something that is from me. So by doing it, it made me feel like I can trust myself, that if I put my mind to something, I can do it.

Also, it was very weird to hear my voice, because I don't think I sound good. I talk fast, so some people don't understand what I am saying.

Q: One of the most emotional passages in your diary is when you talk to your dad about your HIV status. How difficult was it to talk to him about your illness?

The relationship between me and my dad was always wonderful. I was always with him. He believed in me, he took me to school — I was his "little girl." He didn't believe I could do something stupid or something bad. So when it came to the point that I had AIDS — something I cannot get rid of — it was very hard for me to tell him. Although all of my family members knew, I just could not tell him. And I begged my family not to tell him, because I feared what it would do to him, it would break his heart. I was afraid that he would not trust me or love me or believe in me anymore.

But the time came when I made this point to myself: That if I am going to tell the whole wide world, if everyone is gong to know about my status, my father also has a right to know... because he is my father. I don't want him to hear it from the radio or from a neighbor or written in a newspaper. I just have to tell him.

Q: It's a big surprise in your diary when you reveal that you have given birth to a baby. (The father is boyfriend Melikhaya, who is also HIV-positive. What made you wait before you talked about your daughter Onwabo?

I decided not to record when I was pregnant. I didn't want to tell anyone that I was pregnant. Because everyone is going to freak out and say, "She's HIV-positive, and she's pregnant, what the hell is she doing? She doesn't know what she is doing." I thought my family would freak out, and people would make comments. But when the doctor told me that there was a chance the baby would be infected and a chance that the baby may not be infected, I decided I wanted a baby.

I was able to take AZT, and I went to the mother's program where pregnant mothers go when they are HIV-positive. And my daughter came out HIV-negative. She is clear, she has had her last HIV test.

Q: Do you ever worry about what will happen to Onwabo if you pass away?

I never worry about what if I die. I just don't want to die when she is young. I want her grow a little bigger, and she can know me, and I can know her better. My mother will take care of her if I die.

Q: Do you and Melikhaya talk about what will happen if one of you passes away?

We never talk about that.

Q: How is your health now? At the beginning of your diary, your CD4 count (a way of measuring the immune system) is 167, which is dangerously low, and you are given anti-retroviral drugs (ARVs).

By the time I got sick, I was not expecting to get sick, because the doctor told me that my CD4 count was very low, but I looked healthy. I just kept telling myself there is nothing to worry about. But when I did get sick, I was very scared, because I could see that I was very sick. I thought, "OK, if the doctor says I must take ARVs because they are the only thing I can take to make me better, I must take them." After I took them, everything went back to normal. And now, I must take ARVs for the rest of my life.

My CD4 count is now 350. I just checked it before I came to the United States. It's the highest it's been in recent years. It's been going up, ever since I started ARVs.

Q: Has your life changed since finishing your audio diary?

I am doing great. I am enjoying myself.

Q: Are you doing more activist or education work?

Q: How does that make you feel? Knowing that people are still hiding?

I know how it feels to hide. I hope that everyone can swallow their pride and just come out — because hiding won't help, because you can't hide the sickness. One day, it will come out and it will show. When you need help, you can't hide your sickness from the doctor, you must tell the doctor what you feel.

Q: What are you looking forward to doing in the next year? How do you feel about life?

I am happy about life. I just want to concentrate on my health and study further and also take care of my daughter. I would like to get an education and go to college. I would like to do journalism. I always wanted to be a journalist, even when I was growing up. Because I know that I talk too much. I thought I would make a good TV presenter. And Melikhaya, he wants to be a photographer.