Accessibility links
Bruce Springsteen On Pete Seeger: In The Audience At Asbury Park Melissa Block shares the view from her seat at a 2006 Bruce Springsteen concert, ahead of a tour to support We Shall Overcome: an album of songs made famous by folk legend Pete Seeger.

Listen
In The Audience At Asbury Park

In The Audience At Asbury Park 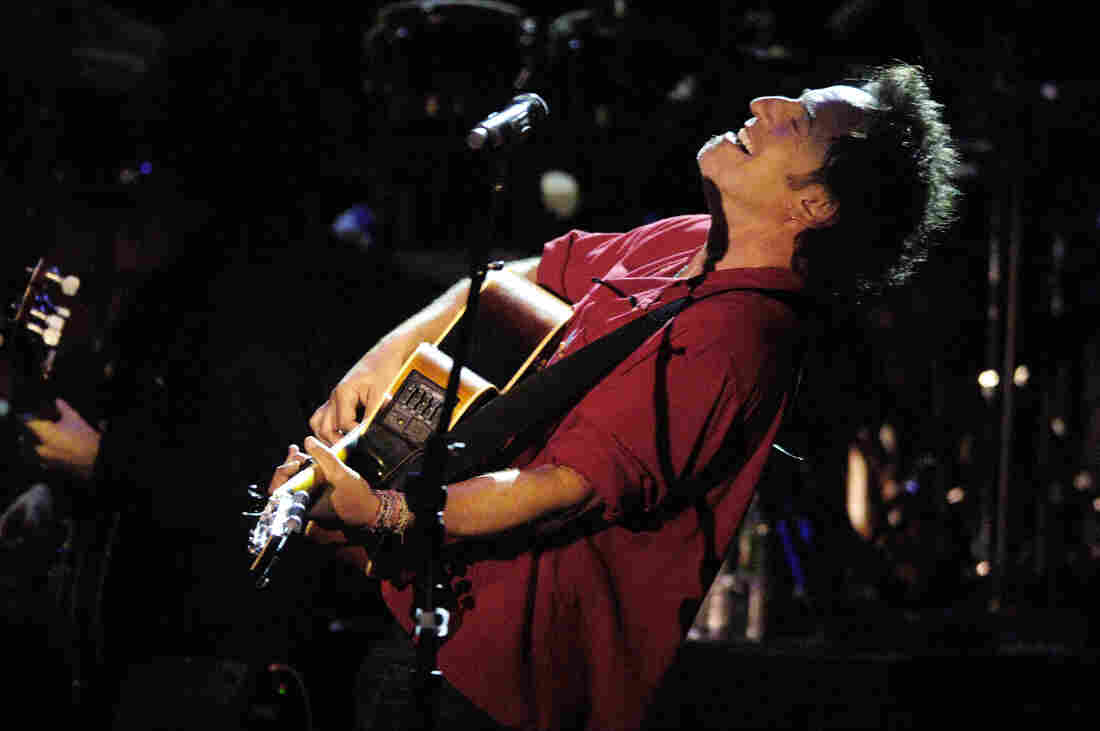 Bruce Springsteen rehearses with his Seeger Sessions Band at the Convention Hall in Asbury Park, N.J., in 2006, in preparation for a tour behind the album We Shall Overcome: The Seeger Sessions. New York Daily News Archive/NY Daily News via Getty Images hide caption 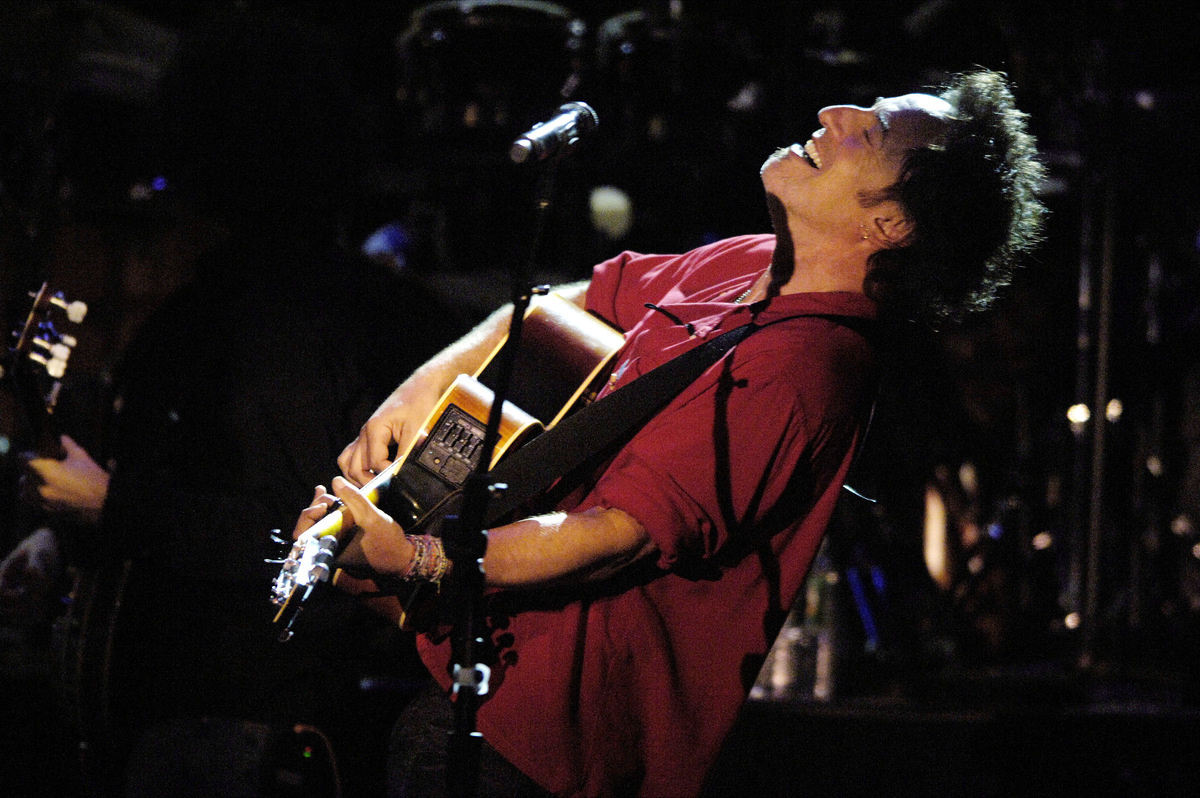 Bruce Springsteen rehearses with his Seeger Sessions Band at the Convention Hall in Asbury Park, N.J., in 2006, in preparation for a tour behind the album We Shall Overcome: The Seeger Sessions.

In 2006, Bruce Springsteen released We Shall Overcome: The Seeger Sessions, an album of songs made famous by folk legend Pete Seeger. NPR's Melissa Block attended a rehearsal concert for that album's tour and spoke to The Boss backstage. Hear their conversation on All Things Considered at the audio link, and read on for Block's personal impressions of that night.

Why does that guy have a green frog nestled into his jacket? It's Monday night, April 24, and we're in Asbury Park, N.J., for one of Bruce Springsteen's rehearsal concerts for mostly home-state fans before he heads out on tour.

And one of the 3,000 or so fans who've crowded into the old, deteriorating convention hall on the boardwalk definitely has a stuffed green frog peeking out of his jacket. What's up with that? Then I see his sign, which reads: "Froggie."

Oh, yes. The tune "Froggie Went A-Courtin'" may date back to 1549, but it's got a new fan. Legions of them, if the crowd in Asbury Park is any indication.

Many Springsteen loyalists have been awaiting his new album, We Shall Overcome: The Seeger Sessions, with some trepidation. This is not the E Street Band by any stretch of the imagination. There are 18 players on even more instruments — two fiddles, a pedal steel, accordion, banjo and washboard among them. And I haven't even mentioned the brass section: tenor sax, trumpet, trombone and tuba.

They're all crowded on stage at the Asbury Park Convention Hall in a happy jumble. Red velvet drapes at the rear of the stage turn purple in the lights. Three beaded chandeliers hang overhead. The effect is New Orleans bordello, turn of the (last) century. And the sound has a lot of New Orleans Dixieland running through it. Indeed, the band is headed for its first "real" show this Sunday, at the New Orleans Jazz and Heritage Festival.

Springsteen takes the stage in his working-man outfit: jeans, shirt unbuttoned and sleeves rolled up, work boots. His wife, Patti Scialfa, stands to his left, all in black.

"Good evening, everybody!" he hollers — and the band digs into a rousing, minor-key version of the old Negro spiritual "Oh Mary Don't You Weep."

If Pete Seeger's versions of these songs were spare, sing-along anthems — often just his sweet, clear voice and his five-string banjo — these are full-bore rockers. I spot another sign in the audience: "Bruce folkin' rocks." And it's true. Springsteen is bathed in sweat early on, his shirt completely wet. He holds his guitar high, and at particularly raucous moments, he stands on one leg, the other kicked out to the side.

Introducing the historical ballad "Jesse James," Springsteen says, "I'm sure Jesse James was an unbearable bastard, but it's still a good song." At the end of the song, the brass section has stepped down off their riser to join the others on the main stage. The energy is intense: It's a huge, joyful sound — even though it's a ballad about murder.

The new CD hadn't come out yet when we saw the show Monday. But fans could listen on the Internet ahead of time and they shout out requests: "'Old Dan Tucker'!" someone yells.

Springsteen laughs. "Requests are pourin' in for those 100-year-old tunes already!"

Springsteen told me in our interview earlier in the day that fans shouldn't worry: They won't hear "Rosalita" or "Born to Run" redone as bluegrass/gospel/folk tunes. But on the night we go to the concert, he does perform a few of his own songs, some of which are barely recognizable in their new versions. "Open All Night," from the 1982 album Nebraska, now opens with a female doo-wop, a capella trio. "If I Should Fall Behind," a love song in 4/4 time on the album Lucky Town, turns into a tender waltz in concert. (Rehearsing the song earlier, Springsteen tried to coax wife Scialfa into a quick waltz on stage. She didn't seem interested.)

There's much more: I can only imagine how the post-Katrina crowd in New Orleans will respond at Jazzfest when they hear Springsteen's version of "How Can a Poor Man Stand Such Times and Live?" (written by Blind Alfred Reed in 1929) and the new verses he has added like this one:

Now there was bodies floatin' on Canal Street when the levee fell
Martha get me my 16-inch and some dry shells
Them who got, got out of town
And them who ain't got left to drown
Tell me, how can a poor man stand such times and live?

Toward the end of the show, Springsteen plays "Pay Me My Money Down," an old protest song sung by black stevedores who would get stiffed on their pay by ship captains. So there was something oddly comical about watching well-fed, white New Jersey men pumping their fists in the air and shouting along, "Pay me! Pay me! Pay me my money down!" — before heading out into the night and their SUVs.

Springsteen told me that Pete Seeger wrote him a "lovely letter" last week after he heard the CD, telling him about "the things he liked and the things that surprised him and the things he'd need to listen to more." It's worth noting that none of the songs on the CD were actually written by Pete Seeger. Springsteen doesn't take on the songs Seeger is perhaps most famous for, like "Turn, Turn, Turn," "Where Have All The Flowers Gone?" or "If I Had A Hammer" (for which fellow Weavers member Lee Hays wrote the lyrics; Seeger, the music).

And curiously, even though the album is billed as "The Seeger Sessions" and the marquee at the convention hall advertised the concert as such, Springsteen doesn't mention Pete Seeger's name or talk about him at all until the very last moment of the show. And then, all he says is this: "The Seeger Sessions Band. Good night!"