Accessibility links
Steve Nash, Basketball's Selfless Socialist? Phoenix Suns basketball star Steve Nash says he's read Karl Marx's The Manifesto of the Communist Party. On the court, Nash is famous for passing the ball to teammates, giving up scoring opportunities himself so others can score. In a league full of flashy, high-scoring players, could Nash be an example of a Marxist player?

Phoenix Suns basketball star Steve Nash says he's read Karl Marx's The Manifesto of the Communist Party. On the court, Nash is famous for passing the ball to teammates, giving up scoring opportunities himself so others can score. In a league full of flashy, high-scoring players, could Nash be an example of a Marxist player? 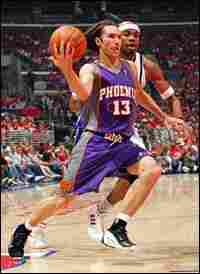 Steve being selfish: Nash drives to the hoop in a playoff game against the Clippers, May 14, 2006. Lisa Blumenfeld/Getty Images hide caption

From NPR News, it's DAY TO DAY.

In basketball, the L.A. Clippers and the Phoenix Suns are tied two apiece in their best of seven NBA playoff series. The Sun's star player is Steve Nash. He's a small, shaggy-haired, soccer-loving Canadian who had trouble finding even a small college to let him play, but he has succeeded with a style of play that reminds DAY TO DAY's Nihar Patel of an unlikely person: Karl Marx.

A specter is haunting the NBA playoffs - the specter of phoenix Sun point guard, Steve Nash.

Unidentified Man: (In television clip) What a pass by Steve Nash inside…

PATEL: Esquire Magazine has dubbed Nash the Karl Marx of the hardwood. This is partly because he told the New York Times that he was reading the Communist Manifesto as well as some writings of Che Guevara, but it also has to do with his style of play on the court.

Mr. STEVE KERR (Basketball Analyst, TNT Network): Nash is actually one of the most unselfish players you'll ever see.

PATEL: Steve Kerr is a basketball analyst for TNT and a former pro-guard with five championship rings of his own. He says Nash is fundamentally different from superstars like Kobe Bryant and Alan Iverson.

Mr. KERR: He makes everybody better, every single second of the game because he creates more open shots for teammates than anybody I've ever seen and he seems to understand the game better than anybody.

PATEL: Now, Karl Marx was dead before this game of basketball was even invented, but his thinking about the plight of industrial workers in 19th century Europe makes sense here.

Marx said all history is a struggle between the oppressor and the oppressed. In basketball terms, that translates as a struggle between the bourgeoisie - the ball-hogging, high-flying superstars and the proletariat - everyone else in the league. And the ball, that's a mean of production, and that mean is concentrated in the hands of those superstars who refuse to pass to others. The problem, Marx would say, is players on the same team end up competing against each other without putting up a solid team attack. But then, there's Steve Nash. He's a superstar who plays as if he has no interests apart from or above the rest of his team. University of Chicago economist John Huizenger(ph) said when one guy's doing all the scoring, the Marxist view would predict a loss, because…

Professor JOHN HUIZENGER (Economics, University of Chicago): If you're scoring all the points, the other four guys are going to get alienated, and they're not going to play defense. And so, every time you score, the other team's going to score, and you haven't really helped yourself win. I think that sits pretty well with the way Steve wants to play basketball. He wants everybody to share, and it's the glory of the team that needs to be celebrated.

PATEL: And earlier this month, when Nash celebrated his second strait Most Valuable Player Award, he really did take little credit for himself.

PATEL: Nash insists he is not actually a Marxist or a Communist. And realistically, who could be with a $65 million contract? Take a look at the Sun's statistics, though. This season, they were the league's highest-scoring team, yet no Sun player was even among the league's 15 highest individual scorers. Steve Nash himself ranked 33rd, leading the league in assists. But Nash is not the only one on the planet playing like this. John Huizenger the economist is also John Huizenger the agent for Chinese national Yao Ming, who plays center for the Houston Rockets. He said basketball and communists try to emphasize a selfless team play.

Prof. HUIZENGER: For a long time, they didn't even keep individual statistics, because how each individual did is completely unimportant. What's important is how the team did.

PATEL: Any Marxist scholar will tell you class struggle and violent revolution have precious little to do with basketball. But think about this: Laker coach Phil Jackson incorporates aspects of Zen Buddhism and Lakota Spirituality into a personal philosophy that's won him nine NBA championships. If that can work, maybe players of all teams should unite. Nihar Patel, NPR News, Los Angeles.

BRAND: Stay with us. DAY TO DAY returns in a moment.

Read 'The Manifesto of the Communist Party' at Marxist.org