Accessibility links
The Walkmen In Concert Bob Dylan meets indie rock in the music of The Walkmen. Hear the New York rockers perform selections from their latest CD A Hundred Miles Off and more in a full concert recorded live from Washington, D.C.'s 9:30 Club. 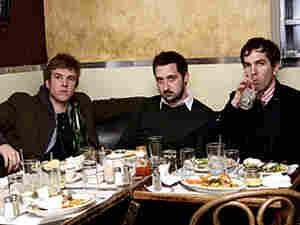 The Walkmen feature Hamilton Leithauser on lead vocals and guitar, Matt Barrick on drums, Pete Bauer on keyboards, Walter Martin on bass and Paul Maroon on guitars. The band formed in 2000, but its history together goes back several decades. Leithauser and Martin are first cousins who grew up on the same street. Four of the band's five members went to the same high school in the Washington, D.C., area.

That longtime familiarity "makes it easier and harder," says Leithauser. "Sometimes there's no surprises in our styles, but in the end it's better because you've got a feel for everybody's playing."

The Walkmen released their full-length debut CD Everybody Who Pretended to Like Me Is Gone in 2002 to strong reviews. After becoming a favorite in indie circles, the band signed with Record Collection for their second album, 2004's Bows + Arrows. Released May 23, A Hundred Miles Off is the band's third album. A fourth is planned for later this year.

Album
A Hundred Miles Off
Artist
The Walkmen