David Lipsky reviews the latest installment of Brian K. Vaughan's Y: The Last Man, graphic novels that depict the adventures of Yorick Brown and his monkey Ampersand. The futuristic tale mixing humor and disaster is in its seventh volume, "Paper Dolls."

Comic book lovers and literary critics alike took notice back in 1986 when the groundbreaking graphic novel Maus was published. Since then, the market for graphic novels has grown. Writer David Lipsky has a review of the latest installment of Brian K. Vaughan's series, Y: The Last Man.

The year's best movie is a comic book, Brian K. Vaughan's, Y: The Last Man, which just bursts with cool effects, exotic ports of call, stunning reversals, rousing characters and crack dialogue, qualities you pray for in the movie line. Y is a graphic nove--a term that's allowed comics to take their place among video games and pop music as hobbies people now track with them into adulthood. It's no easy thing to march into Borders and ask for the comic section. But I'm real good at asking for novels.

Vaughan is no standard comics writer. When Entertainment Weekly compiled its 10 Best Fiction List last year, he was right up there with EL Doctrow and Sadie Smith. Y arrives flashily decorated with just about every one of its industry's medals.

I gave it to a friend. He called at 9:05 the next morning with two questions. Why isn't this a movie? And when can he borrow the next book? Yorick Brown, Y, is the earth's last man. A nonchauvinistic plague has carried off every other guy and the resulting world is no dating paradise for Yorick. As bearer of the planet's last working chromosomes, he's a weapon of mass population, and he's being sought by every government hoping to reforest itself.

He's also something of a dweeb, and he's certainly a coward. He's accompanied by two much sharper and braver women as they set out to find the labs and scientists who can put a stop to the plague.

What makes Y so much fun? At a time when the year's biggest movies, X-Men, Superman, Batman, Spiderman, are based on comics, here's a story on paper that plays the game better and is about the last man of all. Start with the first, called inevitably Unmanned, and try not to read them all. Right now it's just about the most fun you could hold in your hand.

SIEGEL: Our reviewer, David Lipsky, is the author of Absolutely American: Four Years at West Point. He lives in New York. 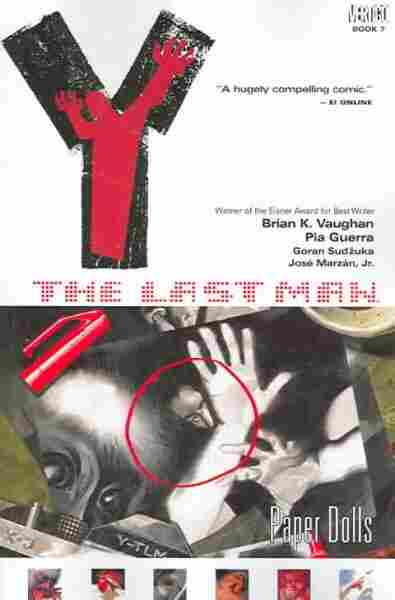