Accessibility links
A Dad Reflects on His Best Work: Four Daughters For George Caywood, 67, the challenge of raising four daughters was made harder by his struggle with depression. His oldest daughter recently interviewed him at a StoryCorps booth in Los Angeles.

Listen
A Dad Reflects on His Best Work: Four Daughters 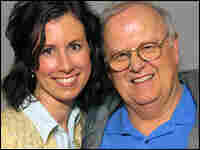 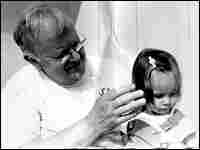 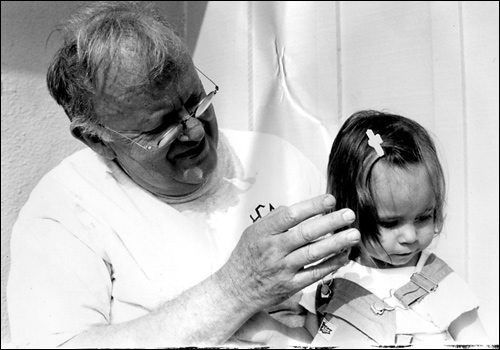 George Caywood with his first granddaughter, Parker, who is Jill's daughter.

Today, in honor of Father's Day, StoryCorps brings you a conversation between a father and his daughter.

George Caywood, 67, raised four daughters in Azusa, Calif., 15 miles east of Pasadena. He worked on Skid Row for 20 years; Caywood was the director of the Union Rescue Mission, one of the oldest homeless shelters in Los Angeles.

For George, the challenge of raising four daughters was made harder by his struggle with depression.

His oldest daughter, Gina Caywood, 38, recently interviewed her father at a StoryCorps booth in Los Angeles. She remembers being frightened by her father's depression, hearing him cry at five in the morning, terrified of going to work, terrified of facing another day.

When Gina was a child, she wrote a poem wondering when she'd get her father back. But, Gina says, even throughout his depression, her father didn't let her and her sisters down.

"It's amazing," Gina says. "You were such a wonderful, loving father to us."

"It's the thing I worked at hardest in my life," George says. "You and your sisters have not breathed a breath when you weren't the most important things in my life."

George says his four daughters each have their own way of getting what they want out of Dad:

Gina bats her eyelashes — her brown eyes get Dad every time.

Jill is always on her dad's side, always working on his behalf.

Janelle remembers everything her dad says.

And Joanna takes her dad's face in her hands and turns it to look at her.

"The four of you together," George admits. "I knew I was whipped."

An image of the Caywood sisters that was on this page has been removed because the photographer had not authorized its use.