Accessibility links
Gomez In Concert Britain's experimental rock group Gomez is known for blurring lines between musical forms and genres, creating an entirely original sound nearly impossible to pin down to any one style. The band visited Washington, D.C. for a full concert June 22, webcast live on NPR.org with jazz trio The Bad Plus.

Gomez in Concert on All Songs Considered

Gomez in Concert on All Songs Considered 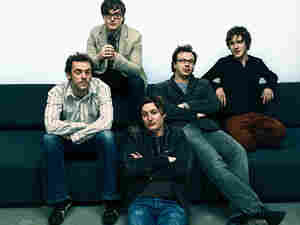 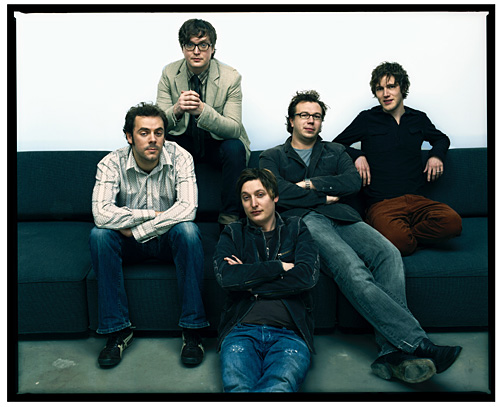 A presentation of NPR Music's 'All Songs Considered' and the 9:30 Club in Washingotn, D.C.

Britain's experimental rock group Gomez is known for blurring lines between musical forms and genres, creating an entirely original sound nearly impossible to pin down to any one style. Currently on tour for what some critics are calling a stunning new album, the band visited Washington, D.C., for a full concert, originally webcast live on NPR.org June 22.

The music of Gomez is always morphing, in part to fit the disparate tastes of the band's five songwriters and three lead singers. The group features Tom Gray on guitar and keyboards, Ben Ottewell on guitar, Ian Ball on guitar and harmonica, Paul Blackburn on bass and Olly Peacock on drums. They cite Nirvana and Woody Guthrie among their influences, along with classic Motown and barbershop quartets.

After releasing their debut single, "78 Stone Wobble" in spring of 1998, Gomez soon attracted international attention when they won the Mercury Music Prize for album of the year for Bring It On, which SPIN anointed "a damn beautiful album." It was followed by Liquid Skin (1999), the rarities-and-B-sides compilation Abandoned Shopping Trolley Hotline (2000), and In Our Gun (2002). 2004 brought the album Split the Difference, hailed by the BBC as "one of the finest releases of the year."

For their latest CD, How We Operate, Gomez set out to change everything.

"As a creative partnership, and as friends, we had to regroup and make a career-defining record," says guitarist/keyboardist Tom Gray. "There's always been a certain ragged glory to Gomez. The main thing with this record was to get everybody together in one room, work on all the songs together, and make sure that it was a really unified vision."

The Bad Plus is a jazz trio known for bold and unexpected interpreations of rock songs like Nirvana's "Smells Like Teen Spirit" and Blondie's "Heart of Glass." The group features Reid Anderson on bass, Ethan Iverson on piano and David King on drums.