Accessibility links
Texas Icehouses Melt Away Texas Icehouses — part town hall, part tavern, icehouses have been a South Texas tradition since the 1920s. Once a vital part of everyday local culture, a cornerstone of every neighborhood in San Antonio and Houston, they are a rapidly diminishing, endangered species. A journey into this Mexican, German, Tejano, Anglo tradition. 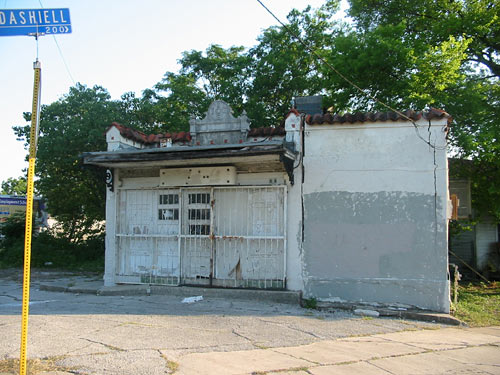 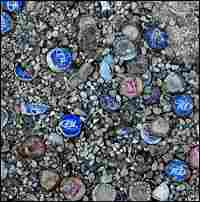 How to spot an icehouse: "If there not 46 zillion bottlecaps laying in the parking lot crushed by 46 million pickup trucks -- you're in the wrong place." -- Rhett Rushing, Institute for Texan Cultures The Kitchen Sisters hide caption 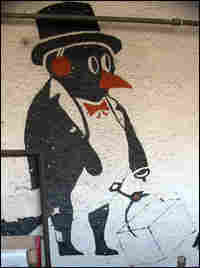 San Antonio's Contreras Ice House, on the west side of town along the Alazan Creek, was closed up tight when we passed by, but the signature tuxedo-clad penguin remains. The Kitchen Sisters hide caption

Shirley Vidal is a police dispatcher in San Antonio. Every Thursday night, she goes down to Sanchez's Ice House to meet up with her friends from the police department. Their beer is iced and their picnic tables are great. The Kitchen Sisters hide caption 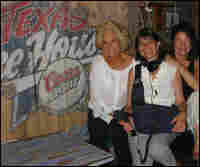 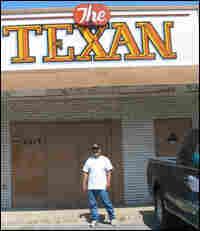 The Texan is right along the train tracks. When the train goes by, the beers go down to $1.35. It's called "Train Beer." And when the train pulls in, the guys get off to pick up tamales from the Delicious Tamale Company next door. The Kitchen Sisters hide caption 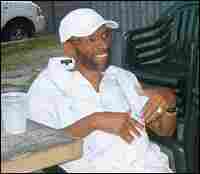 Sterling Houston, cooling down at La Tuna. "My dad owned bars and as a child that's where I spent a lot of time. To me, the scent of spilled beer on the floor of a bar is like sweetness of flowers," he says. The Kitchen Sisters hide caption 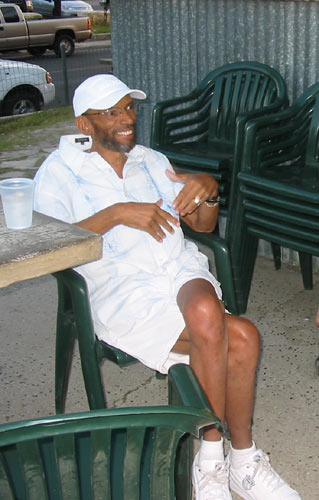 Sterling Houston, cooling down at La Tuna. "My dad owned bars and as a child that's where I spent a lot of time. To me, the scent of spilled beer on the floor of a bar is like sweetness of flowers," he says.

A clip from the work-in-progress documentary film on icehouse culture by Ron Zimmerman and Tom Denyer:

Texas Icehouses. Part town hall, part tavern, icehouses have been a South Texas tradition since the 1920s. Before refrigeration, icehouses stored and distributed block ice for the neighborhood iceboxes.

Over time, they diversified-- iced beer, a little food, maybe some groceries — a cool, air-conditioned spot where neighbors and families come to sit, talk, play dominoes, turn up the juke box, maybe eat some chicken wings, dance on the slab outside. No two are alike — Sanchez', Acapulco, Dos Hermanas, Stanley's, La Tuna, The Beer Depot, The Texan.

Music in This Story

'Why Baby Why' - George Jones, from 'The Classic Mercury Years' (Mercury)

Once a vital part of everyday local culture — a cornerstone of every neighborhood in San Antonio and Houston — they are rapidly diminishing, an endangered species. The Kitchen Sisters take us on a journey into this Mexican-German-Tejano-Anglo tradition.

A lot of Kitchen Sisters stories are born in taxicabs. In fact, the whole Hidden Kitchens concept was conceived in the back of a Yellow cab in San Francisco. The icehouses of Texas came to our minds in a Checker in San Antonio. We were there last year on our way to an interview for our story on the Chili Queens when we saw an abandoned ice depot on the way and asked the driver what it was. He began to tell us the story of how ice was delivered to the neighborhoods and the birth of the icehouses all over town. We were hooked and lured a year later to document this faded but vibrant tradition, and to drink some Texas beer chilled on Texas ice.

Sterling Houston, author and playwright, grew up in and around icehouses in San Antonio. We spent one evening with Houston visiting some of his favorites. This is an excerpt from his novel, The Secret Oral Teachings of the Sacred Walking Blues:

The Ice House, which really did sell ice, but mostly sold ice-cold beer, cigarettes and soda water, was situated on a wedge of ground formed by the "x" of two dirt roads pretentiously called Hedges Street and Gevers Boulevard. This Ice House was not an actual house of ice but a tin shed cobbled together from the salvaged pressed tin ceiling panels of the Good Samaritan Colored Hospital torn down in 1948.

These were big tabletop-sized pieces of tin embossed with olive branch borders surrounding a central thistle bloom. Many of them were decorated with big cloudy stains caused when long-ago storms leaked through. These panels had been banged together on a skeleton of two-by-fours, and were decorated by colorful tin and porcelain advertising signs for Nehi, grapes, Lone Star, Pearl and Chesterfield Kings.

The resulting shed was topped by a roof of rusty corrugated tin, which hung out over the front, by several feet. This overhang was supported at its corners by stout posts made from sawed-off telephone poles. It gave the front of the place the look of a funky trading post, which in a way, it was.

Behind the little building and beside the outside toilet (which was not an outhouse, but a cabinet made of plywood packing crates built around a single, seatless commode) there grew an ancient mesquite tree. Although most mesquites grow squat and spread out like gnarled and signifying hands, this one had tapped into a deep spring, which fed it till it had grown twice the normal height. It had grown tall and twisty like a monster bonsai slanting lazily to shade the little shed from the furnace blast of mid-day mid-year mid century San Antonio Texas afternoons.

At times, groups of men gathered here to play cards, or loudly click dominoes and shout. Other times a lone man and his guitar and Kindhearted Woman and Have You Ever been Mistreated and sometime all of this at once plus me nine-years-old drinking Nehi grape and pineapple Hippo soda water. That time year day hour had frozen in amber suspended in the murmur of guitar strings trembling forever unresolved. Yeah. Secret."

In the 1860s, there were three ice-manufacturing plants in San Antonio and only five others in the United States. By 1928, Southland Ice (later Southland Corp, now 7-Eleven Inc.) operated twelve ice plants and twenty retail ice docks in Dallas and San Antonio.

After one store placed a souvenir totem pole at its entrance, Southland stores came to be known as "Tote'm Stores," since customers toted away their purchases. They pioneered the practice of conveniently locating ice pickup stations in neighborhoods and by first selling chilled watermelon, then groceries and other items along with block ice — helping to launch the convenience–store concept.

The difference between the icehouse and the icehouse-turned-modern-convenience-store is this, as one man said: " A Stop & Go is just that. This is a stop and stay. You put down anchors here."

Karl Stephan, whose great-uncle was in the ice business, called to tell us his story and to share some of his grandmother's recipes. Call us at 1-866-OVENMIT with your Texas Kitchen tales.

Another Side of Ice: Recipes for Homemade Peach Ice Cream, Pound Cake June 30, 2006

Becky Powell: 'The Best Kolaches in the County'

Hangin' at the Icehouse

The people you hear in this story (in order of their appearance) are:

Bartender at The Texan