Accessibility links
Getting the Goods on 'Good Bacteria' They're called probiotics and they come in foods like yogurt and in pills. The promise: They're good for your health. The reality: So far, studies show mixed results.

Listen
Getting the Goods on 'Good Bacteria' 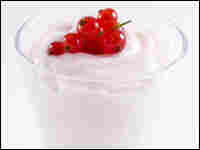 Pros and Cons of Probiotics

Researchers are trying to understand how these good bacteria, taken in pill form as a supplement, may play a role in promoting good immune function.

Probiotics are the latest health buzz. The "good bacteria" are found in foods like yogurts and kefirs, and are also packaged as pill-form dietary supplements.

"By definition, a probiotic is any substance containing live organisms that, when ingested, have a beneficial effect on the host by altering the body's intestinal microflora," says physician Robynne Chutkan, Associate Professor of Medicine at Georgetown University Medical Center in Washington, D.C. The theory is that certain strains of these live organisms — or good bacteria — can displace bad bacteria in the gut. The challenge is figuring out which combination of bacterial strains — and at which doses — might be effective.

When patients started asking Chutkan about a new line of Dannon yogurts called Activia, which contain a strain of bifidobacterium, she did some homework to find out whether that particular probiotic has been studied. She found one trial of Activia that split healthy volunteers into two groups. One group ate Activia. The other group ate an inactive form of Activia product with no live bacteria. At the end of the study, the volunteers eating the authentic stuff had a 21 percent decrease in colon transit time; in other words, food passed more quickly out of their bodies. Chutkan says this may reduce the discomfort of constipation.

"And from a theoretical point of view," Chutkan says, "we think that moving substances through the colon quickly is important for good health."

So when patients ask her about Activia now, she doesn't tell them the yogurt is superior to other products with bifido bacterium. But she does tell them that there's some evidence the product does indeed contain the good bacteria that it advertises on the label.

Pills, however, are another matter. Because probiotics are categorized as dietary supplements, the FDA does not approve them. Chutkan advises her patients that probiotics sold as nonrefrigerated, pill-form supplements may not contain enough active bacteria to be effective. The problem, she says, is that heat, oxygen, or moisture may render many of these bacteria inactive. She warns that anecdotal evidence cited on a Web site or package is not sufficient proof of effectiveness.

Fewer Allergies, but for How Long?

But there has been solid research on probiotics as a medical treatment for irritable bowel, pediatric diarrhea, or allergy disorders. In these studies, doctors have used either Lactobacillus GG, sold under the brand name Culturelle, or a product called VSL-3. In a study completed a few years ago, researchers gave Lactobacillus GG to pregnant women with a history of allergies, then to their infants. The babies developed a significantly lower rate of allergic eczema than the control group that did not take probiotics.

The findings are intriguing, says Dr. Athos Bousvaros of Children's Hospital Boston. But they raise many questions.

"For example, is that effect on allergy long-lived? Or as soon as you stop taking the probiotics does the eczema come back?" Bousvaros asks.

Bousvaros has done his own research, testing probiotics on children with well-managed cases of Crohn's disease. He found that the probiotics did not reduce GI flare-ups. He hopes to do follow-up research on a different population of patients that may benefit more.

"There are many good, quality-controlled trials in the medical literature that suggest probiotics might work," he notes.

So for now, Bousvaros tells patients that probiotics probably can't hurt — and they might help.