Accessibility links
Sleater-Kinney In Concert More than a decade after the band first formed, Sleater-Kinney continues to make passionate, punk-inspired rock. The group recently announced plans to go on indefinite hiatus after its current tour. 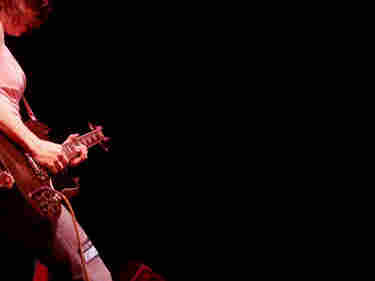 "Not what You Want"

"What's Mine Is Yours"

More than a decade after the band first formed in Olympia, Wash., Sleater-Kinney continues to make passionate, punk-inspired rock with the release of its seventh CD, The Woods. But it may be the trio's last album, at least for some time: The group recently announced plans to go on indefinite hiatus after its current tour ends later this year. It performed an epic concert at Washington, D.C.'s 9:30 Club August 3.

Sleater-Kinney's current lineup features guitarists and singers Carrie Brownstein and Corin Tucker, with drummer Janet Weiss. The band emerged from the so-called "riot grrl" movement in the early 1990s — a subculture of young feminist musicians who sought to change perceptions of women in rock. It played traditionally male-dominated instruments like guitars and drums, screamed vocals and thrashed on stage. Though Sleater-Kinney has since distanced itself from that movement, the band still identifies with the fierce drive for independence.

"I was definitely a part of riot grrl when it happened way, way back in the early '90s," Tucker says. "But that all kind of took place and came and went really before Sleater-Kinney started. But I think that our presentation probably carries over a lot of feminist notions about wanting to be seen as multidimensional humans and as musicians first and foremost, and not wanting to be sort of seen as these objectified ladies."

Sleater-Kinney's fiery sound is unique in part because it has no bass player and relies solely on two interplaying guitars and drums. Though the arrangement wasn't intentional, it ultimately led to more inspired music.

"As we started thinking about the musical language between the two of us and thinking about the dynamics of the song, we realized that it was actually forcing us to be more creative in our songwriting," Brownstein says. "And we weren't really able to listen to other bands and emulate what they were doing. We were really forced to forge our own style of chord playing, of intertwining guitars, of melody, countermelody. And I think it ended up working to our advantage, but it was slightly accidental to begin with."

Sleater-Kinney made its debut with a self-titled release in 1995, followed by six critically acclaimed albums on Chainsaw Records, the Kill Rock Stars label and Sub Pop. The band built a large following with complex, ear-splitting sonic experiments, masterful guitar work and sharp rants on gender inequality, politics and culture.

In a profile of the band, The New Yorker wrote, "It's insulting to call Sleater-Kinney the best female rock band in the world when they're one of the best rock bands, period."

"The most important thing is that we're making music that we think is good and is important, and that we're having a good time doing it," Tucker says. "I think there's a lot of young women that come to our shows that are just having so much fun, you know, and that's what it should be about. I mean, we're a rock band."

Sleater-Kinney Go into 'The Woods' Aug. 3, 2005
Sleater Kinney on 'All Songs Considered'