Accessibility links
Christenberry Photos Capture the Changing South William Christenberry grew up in Hale County, Ala. For more than 40 years, he has returned there each summer, revisiting the same locations to document the passage of time. 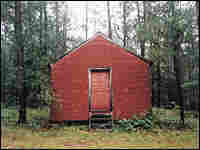 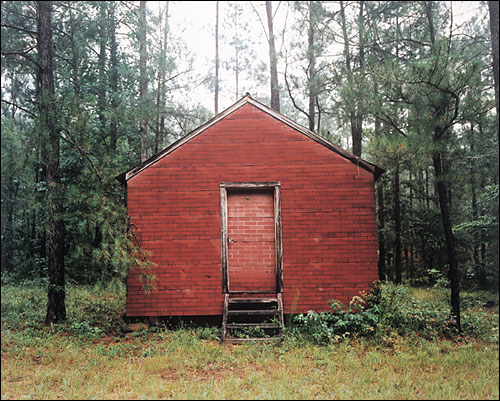 Since 1964, William Christenberry has photographed this red brick building in Talladega National Forest in Hale County, Ala. This iconic image is from 1983.

Artist William Christenberry now lives in Washington, D.C., but he grew up in Hale County, Ala. Since 1961, he has returned there each summer, revisiting the same places in forgotten corners of the region. Through his photos, paintings and sculptures, he documents how the places of his youth have changed — and chronicles the passage of time.

In July, a yearlong retrospective of Christenberry's work opened at the Smithsonian American Art Museum in Washington, while the Aperture Gallery in New York is hosting an exhibit of his photographs through August. There's also a new book of his work, William Christenberry.

What is now a massive, multiyear photography project began more than 40 years ago, when Christenberry returned to Alabama on a research mission for his paintings.

He traveled down country roads during that hot August, cramped in a car that lacked air conditioning.

Through his open windows, Christenberry could smell the red Alabama clay and survey the cotton fields occasionally dotted with weather-beaten buildings.

Christenberry wanted snapshots of these structures — homes, churches, barns and country stores — for paintings he was working on in New York, where he lived at the time.

When something caught his eye, the tall, lanky artist climbed out of his car, holding a small gift he received as a child — a little Brownie camera he and his sister received from Santa Claus.

The Brownie was a tiny camera without a focusing device; it had nothing but a shutter release. 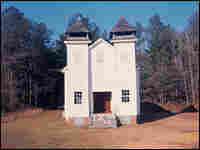 Christenberry says this church in Sprott, Ala., is one of the most beautiful pieces of vernacular architecture he has ever seen. View the gallery to see the pictures. William Christenberry/Aperture Foundation hide caption

Christenberry Describes Photographing the Sprott Church Over the Years

"I'd go into that landscape, what I call the landscape of my childhood, and make these snapshots. Never did I dream that years later, the world of fine-art photography would see something in these," Christenberry says.

It was an encounter with Walker Evans and James Agee's Let Us Now Praise Famous Men — a reportorial account in text and photography of Depression-era farmers — that inspired Christenberry to pursue his own photography further.

The 69-year-old Christenberry still makes the annual pilgrimage to Alabama each year, returning to the same locations: a strange red-brick building standing alone in Talladega National Forest, a juke joint that has since been torn down, churches and warehouses.

He has used different cameras over the years, but the intent behind his photographs has remained the same.