From Her Debut Album 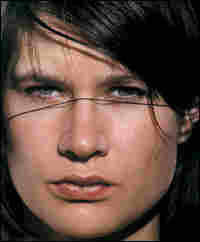 Camille's sophomore album, Le Fil, has sold more than 300,000 copies since it was released in France last year. hide caption

The French singer Camille has many voices inside her. She makes her music by overlaying everything from a sniffle to a growl to an operatic F-sharp.

Her second album, Le Fil ("the thread"), was named France's Best New Album of the Year and has just been released in the United States.

Camille wanted to link the varied sounds in her music, so Le Fil contains a bourdon, a continuous note that travels the length of the CD, connecting each song to the next. She's attracted to its simple sound and says it focuses the mind.

For the series "Musicians In Their Own Words," Camille speaks about the intimacy of the French language, spirituality and finding a natural music in the sound of everyday speech.