Accessibility links
'Winter's Bone': Superlative Teen Angst Daniel Woodrell's novel Winter's Bone follows a 16-year-old heroine named Ree as she hunts for her drug-dealing father, simultaneously trying to keep her family intact. The book, which is set in the Ozarks, is earning comparisons to True Grit. 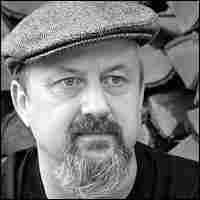 Daniel Woodrell's novel Winter's Bone follows a 16-year-old heroine named Ree as she hunts for her drug-dealing father, while trying to keep her family intact. The book, set in Missouri's Ozarks region, is earning comparisons to True Grit.

Woodrell grew up in the Ozarks, and still lives there today. His previous novels include Tomato Red and Give Us a Kiss. Woodrell's new work takes off on a tangent from the latter novel, in which the Dollys were first introduced. 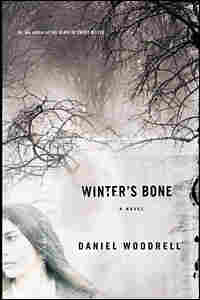 REE DOLLY stood at break of day on her cold front steps and smelled coming flurries and saw meat. Meat hung from trees across the creek. The carcasses hung pale of flesh with a fatty gleam from low limbs of saplings in the side yards. Three halt haggard houses formed a kneeling rank on the far creekside and each had two or more skinned torsos dangling by rope from sagged limbs, venison left to the weather for two nights and three days so the early blossoming of decay might round the flavor, sweeten that meat to the bone.

Snow clouds had replaced the horizon, capped the valley darkly, and chafing wind blew so the hung meat twirled from jigging branches. Ree, brunette and sixteen, with milk skin and abrupt green eyes, stood bare-armed in a fluttering yellowed dress, face to the wind, her cheeks reddening as if smacked and smacked again. She stood tall in combat boots, scarce at the waist but plenty through the arms and shoulders, a body made for loping after needs. She smelled the frosty wet in the looming clouds, thought of her shadowed kitchen and lean cupboard, looked to the scant woodpile, shuddered. The coming weather meant wash hung outside would freeze into planks, so she'd have to stretch clothesline across the kitchen above the woodstove, and the puny stack of wood split for the potbelly would not last long enough to dry much except Mom's underthings and maybe a few T-shirts for the boys. Ree knew there was no gas for the chain saw, so she'd be swinging the ax out back while winter blew into the valley and fell around her.

Jessup, her father, had not set by a fat woodpile nor split what there was for the potbelly before he went down the steep yard to his blue Capri and bounced away on the rut road. He had not set food by nor money, but promised he'd be back soon as he could with a paper sack of cash and a trunkload of delights. Jessup was a broken-faced, furtive man given to uttering quick pleading promises that made it easier for him to walk out the door and be gone, or come back inside and be forgiven.

Walnuts were still falling when Ree saw him last. Walnuts were thumping to ground in the night like stalking footsteps of some large thing that never quite came into view, and Jessup had paced on this porch in a worried slouch, dented nose snuffling, lantern jaw smoked by beard, eyes uncertain and alarmed by each walnut thump. The darkness and those thumps out in the darkness seemed to keep him jumpy. He paced until a decision popped into his head, then started down the steps, going fast into the night before his mind could change. He said, "Start lookin' for me soon as you see my face. 'Til then, don't even wonder."

She heard the door behind her squeak and Harold, age eight, dark and slight, stood in pale long johns, holding the knob, fidgeting from foot to foot. He raised his chin, gestured toward the meat trees across the creek.

"Maybe tonight Blond Milton'll bring us by one to eat."

"That's what is always said."

"Could be we should ask."

She looked at Harold, with his easy smile, black hair riffling in the wind, then snatched his nearest ear and twisted until his jaw fell loose and he raised his hand to swat at hers. She twisted until he bore up under the pain and stopped swatting.

"Never. Never ask for what ought to be offered."

He held the door and they both stepped inside.