Accessibility links
Why Urban Joes and CEOs Bang the Drum Every Sunday for thirty years, drummers and dancers have convened at Meridian Hill Park to honor ancestors, eulogize the fallen, celebrate life, and alleviate stress through the shared rhythm of a drum circle. Elsewhere in the country, drum circles are catching on with everyone from hippies to yuppies.

Why Urban Joes and CEOs Bang the Drum

Why Urban Joes and CEOs Bang the Drum 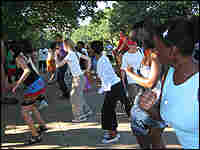 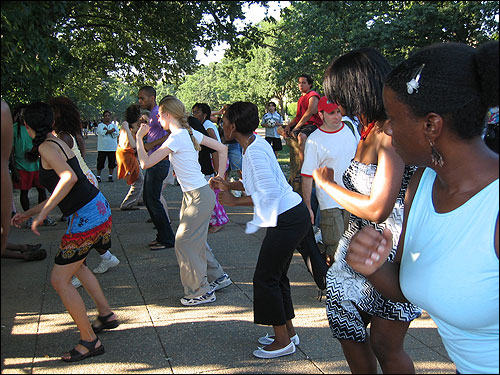 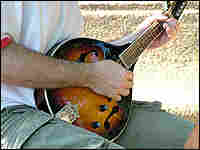 A few musicians add melodies to the rhythm using a variety of non-percussive instruments, including the electric mandolin. Jeremy VanderKnyff, NPR hide caption

The Heart of Drumming

What is it about the drum that captivates us?

It's a hot July Sunday, and Meridian Hill Park in northwest Washington, D.C., is filled with games of soccer and ultimate Frisbee.

On the park's upper level, people gather on concrete benches beneath the shade of trees and pull drums from their cases. By 6 p.m., more than 30 drummers have arrived, adding sound and rhythm to the drum circle. Throughout the evening, rhythms build, dissipate and build again. Dancers move to the rhythm, and spectators watch and listen nearby. Some join in the dancing.

Although stories differ about the circle's origins, drummers have assembled in the park — known to the community as Malcolm X Park — every Sunday for as long as anyone can remember.

William H. Taft, who has been drumming since he was a child, says that the circle started in 1965, when drummers played in the park to honor Malcolm X after his assassination.

Taft co-chairs the Capital City Juneteenth and U.S. Emancipation Day Council, which works to honor the day the last slaves were freed in Galveston, Texas. He says drumming is part of that celebration.

"The drum is the center of African-American spirit and culture, and we're sharing that with everyone," Taft says. He calls this circle a healing circle and says it's rooted in African tradition.

Drumming Up a Diverse Crowd

The term "drum circle" might evoke images of long-haired men beating drums in a primal sort of way, but drum circles have become more expansive in the past decade.

"Drum circles represent a new and very exciting frontier for drumming in general," says Rich Holly, president of the Percussive Arts Society. "It's an incredible way to engage people from all walks of life."

Drum circles themselves can differ. Ali Schlageter, visiting D.C. from San Francisco, compares a drum circle at Golden Gate Park, comprised of hippies and homeless people, with the one at Meridian Hill Park.

"It's smaller; it doesn't bring as much involvement," she says. "People just sit and listen. They don't get up and dance."

Schlageter notes the diversity at the D.C. drum circle.

"That's one thing I do notice: the spectrum of people," she says. "Young, old, ethnic diversity, gender."

Drum circles have a way of erasing the lines between people, says Arthur Hull, who is regarded as the father of the modern community drum-circle movement.

"It literally dissolves the physiology of separateness," Hull says. "That is one of the greatest things that a drum circle does. When people come together to share the in-the-moment music, that naturally gets rid of the things that separate them ... within minutes. That's where the magic is."

The drum circle draws people like federal worker Kristine Smith and artist and poet Lynnetta Carson. Smith plays the djembe, a traditional African drum. She has been drumming with this circle for three months.

"They're really welcoming," Smith says. "But they are expecting people to hold their own in terms of the beat."

Carson has danced with the drum circle for the last three years; she has been dancing in African and Brazilian styles and occasionally leads others in traditional African movements.

"I feel like I must come every chance I get because it just makes my week so much better," Carson says. "Just being able to come and listen to the drums and rhythms and to express yourself and let your burdens go!"

The Power of the Rhythm

Taft says there's an exchange of energy between the dancers and drummers.

"They mesmerize us with the movement, but it's our movement of sound that's moving them and then it goes out and touches the people," Taft says.

Some nearby residents have complained about the noise, but Steve Coleman, president of the Friends of Meridian Hill, says the drum circle helped turn the park around during the 1980s and 90s, when it was plagued by crime.

In the last decade, drum circles have branched out from their community-oriented roots. They're now used for corporate team-building sessions and within the health field.

Hull facilitates drum circles all over the world. Some of his corporate clients have included Apple, Microsoft and McDonald's.

Holly, who is also a professor of percussion at Northern Illinois University, says such activities have spread beyond corporations to teacher in-service days at schools.

Mike DeMenno, manager of the Remo Recreational Music Center in North Hollywood, Calif., says his center has a Health Rhythms night in addition to drum-circle events and drum workshop classes.

"We get cancer patients," DeMenno says. "We have people — they might just be having a little bit [of] arthritis — and sometimes they gently play the drums. It brings heat, and it makes them feel better. It reduces stress." He says that a children's drum circle organized by the center has helped children with autism and Down syndrome.

DeMenno says that health organizations such as Kaiser Permanente use drumming to help their patients and their staff, including nurses, who have one of the highest burnout levels.

The drum circles have also helped people connect to one another.

"I see friendships develop," DeMenno says. "I see people get married. I see families come in who aren't getting along, and afterward are getting along better."

Along with such benefits, part of the appeal of the drum circle is how easy it is to participate in one. To get started, learning to play a simple beat does not take much time, as it might with other instruments. And the existence of drum-circle Web sites makes it easy to find a group to play with.

"Rhythm-based events are permeating our culture," Hull says. "It's becoming an accepted norm in society." 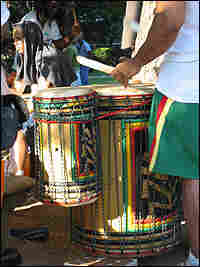 A drummer plays at the Meridian Hill Park in Washington, D.C. Playing the drum can give a person an immediate sense of satisfaction, says Jim Donovan, former drummer with Rusted Root, who now teaches percussion. Melissa Pachikara, NPR hide caption

Jim Donovan was the drummer for the popular alternative band Rusted Root and has since worked on other live performance projects, such as the Drum the Ecstatic International Tour. He also leads drum workshops across the country and teaches percussion at Saint Francis University in Loretto, Penn.

Why is the drum so popular?

It's one of those kinds of instruments where you can get that immediate sense of accomplishment and satisfaction. You really don't need to spend 20 years studying technique to make a nice sound on a drum. Beyond that, there's this whole aspect of being able to play with other people and giving the individual an experience that's very community oriented. And I think that the energy and the enjoyment that people get from that is one of the biggest attractions to the drum.

Could you define a drum circle?

Some will be called a community drum circle, where there's not a whole lot of structure. Sometimes there's a facilitator that will kind of direct the group gently without giving them real specific direction. Most of the events I do involve a combination of an actual class where I teach technique. Some people do strictly traditional African drumming. There are people who do it just as therapy that are not culturally based. It's not just a bunch of people with long hair around a fire . . . .

How is drumming used as therapy?

They've done some pretty amazing research about the connection of group drumming, group musical activity, and its ability not only to relieve stress, but also in helping to increase immune system [function] and general states of well-being. The study they did was with cancer patients. They were able to deduce that, using the protocol they had developed, they were able to increase the level of immune system [function] in their cancer patients. I wouldn't go as far as saying drumming is curing cancer, but it's giving people another tool to use on their path.

What kind of drum circles do you lead?

I try to provide a nice blend of not only the cultural information, but the conceptual pieces about how you can relate playing with other people to how you work with other people in everyday life – at your job, or with family. We talk a lot about relaxation. We talk a lot about how to be present when you play, which is the opposite of multi-tasking.

Where did drumming originate?

If you look at nearly any indigenous culture around the globe, you'll find a drum or some sort of percussion instrument at the heart of the culture. Africa is special because there are so many different subcultures of styles and types of drums, so it tends to be very rich on the drumming side. Not to mention that the rhythm can be incredibly complex and beautiful. There's also quite a bit in Asia and India, South America and a lot of the drumming that went to the Caribbean and South America originated in Africa and was brought over during the time of slavery.

When did drum circles become popular in the United States?

In probably the last 12 years, there's been a really large surge in group hand-drumming. The only reason I could pinpoint is that there are a few individuals who really put a lot of energy and work into getting drums into peoples' hands. There's a gentleman named Arthur Hull who is from California and taught at the university at Santa Cruz. He was really at the forefront of bringing group drumming to a large number of people in North America. Baba Tunde Ulatungi who came from Nigeria back in the 1950s is probably one of the main people who is responsible for bringing drumming to everyday people.