Accessibility links
Tradition vs. Change in 'Lhasa Vegas' Tourists to Lhasa, the ancient heart of Tibetan Buddhism, might find two very different cities — one unchanged by centuries and still clinging to tradition, the other modernizing rapidly along with neighboring China.

Tradition vs. Change in 'Lhasa Vegas'

Tradition vs. Change in 'Lhasa Vegas' 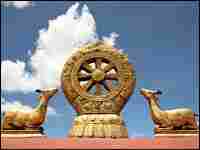 The golden dharma wheel and fawns atop the Jokhang Temple, the spiritual heart of Lhasa. Xeni Jardin hide caption 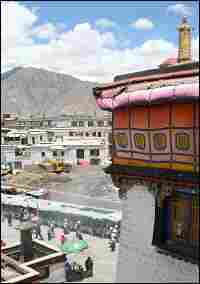 From the roof of the Jokhang, looking out over the Barkhor, or central marketplace, signs of change: a backhoe digs up ground for a new construction. Xeni Jardin, NPR hide caption 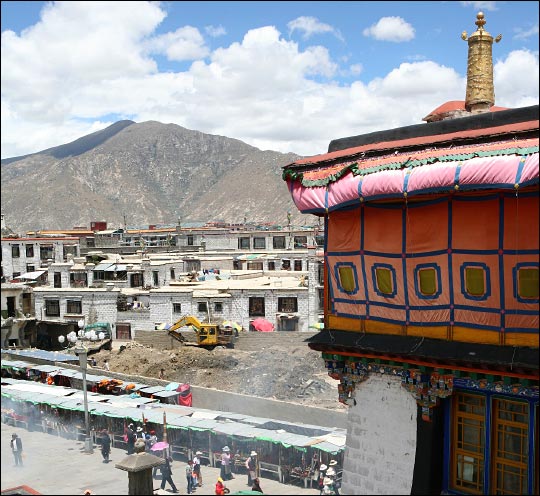 From the roof of the Jokhang, looking out over the Barkhor, or central marketplace, signs of change: a backhoe digs up ground for a new construction. 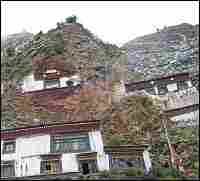 Prayer flags cover the face of a cliff dotted with dozens of sacred caves at Drak Yerpa. The former monastery was destroyed by Chinese forces in 1959. Xeni Jardin hide caption 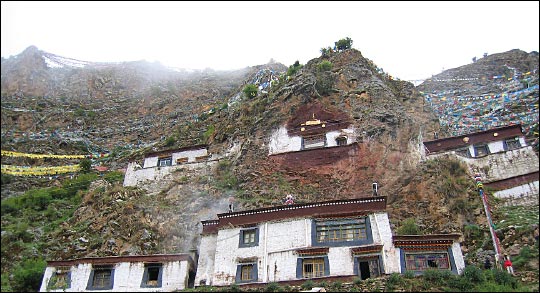 Prayer flags cover the face of a cliff dotted with dozens of sacred caves at Drak Yerpa. The former monastery was destroyed by Chinese forces in 1959. 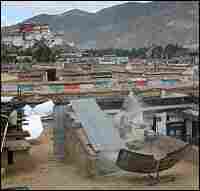 Solar panels for heating tea share space with "sang" burners for morning prayers of juniper smoke to the gods. In the distance, the Potala Palace looms. Xeni Jardin hide caption 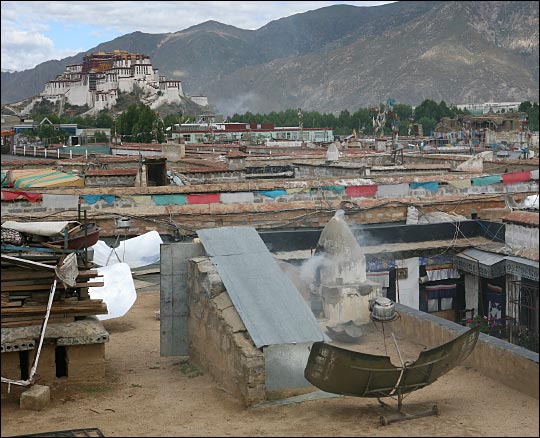 Solar panels for heating tea share space with "sang" burners for morning prayers of juniper smoke to the gods. In the distance, the Potala Palace looms. 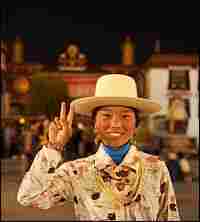 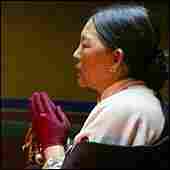 Sights and sounds of faith in the Buddhist temples of Lhasa, Tibet
Xeni Jardin

Many refugees, including the Dalai Lama himself, settled in northern India after China invaded Tibet in 1950. Beijing says Tibet is historically part of China, not an independent nation.

For years, Tibet has been a difficult place to get to for most Westerners, because of visa restrictions — though these rules may soon be eased to facilitate tourism, according to a recent announcement by a communist party leader in Tibet.

Inside what's known as the Tibetan Quarter, the timeless rituals of faith unfold. At the ornate, massive Jokhang Temple in the heart of the quarter, visitors are greeted with the sights and sounds of prostrating pilgrims. They stretch flat on the ground, then rise up, palms clasped in prayer. The stone beneath is polished smooth from centuries of this devotional gesture. The towering Potala Palace, the Dalai Lama's former residence, dominates the horizon.

But just a short rickshaw drive away, a different world unfolds. Outside the Tibetan Quarter, Lhasa feels more like a modern Chinese city, full of garish sights and sounds. The pace of change has never been faster than in the last decade.

Construction sites and tourist developments are everywhere, and the city's religious and cultural traditions are now an economic commodity. Folklore is sold. Some joke that Lhasa will eventually become "Lhasa Vegas." At some large tourist sites, when you hand over your entrance fee, they hand you back a CD-ROM that serves as your ticket.

Tibetans are increasingly integrating technology into their lives. One girl shows me pictures of Tibetan holy men on her cell phone, taken at a 7th-century shrine. At another small temple, a Buddhist monk sees me taking pictures and asks me to send him copies via e-mail — he and other monks share an Internet connection upstairs.

While some Tibetans have access to the Web, it's not the freewheeling information superhighway Westerners enjoy — thanks in large part to the so-called Great Firewall of China. When I tried to connect to Google.com, I often got error messages in Chinese. But I connected easily when using the government-censored Web page Google.cn.

Searches for phrases like "Dalai Lama" yielded fewer results than back in the United States, and I could not reach the home page of the Tibetan government-in-exile, or of various Tibetan human rights organizations.

It's telling that in the Tibetan refugee "capital" of Dharamsala, in northern India, a team of experts works to build a large wireless network for Web access. The goal is to open a flow of news and information about what's happening in the Tibetan homeland. But within Tibet, those voices remain unheard.

A short walk from the cybercafe where I access the Web, I find a small, old temple where Tibetans worship and few tourists go. As I pay my respects at the altar inside, Buddhist priests walk up and whisper two words — "Dalai Lama" — over and over, pointing to their eyes as if to ask, have you seen him? Is he still alive? 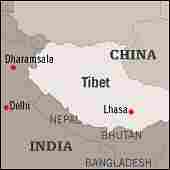 After centuries of troubled relations, Tibet formally declared independence from China in 1912. It was invaded by communist forces beginning in 1950 and renamed the Tibet Autonomous Region -- part of the "big family" of a unified China. Map: Doug Beach hide caption

This way of searching for information does not involve wires or the internet. But in Tibet, it may be the most reliable way to get to the truth. And it is certainly the safest.