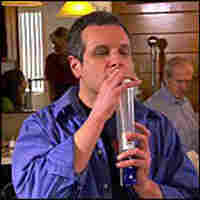 The insulin inhaler, when extended, is larger than most asthma inhalers, but could spare diabetics from injections. Pfizer hide caption

Scroll below for Dr. Martin Abrahamson's answers to your questions about diabetes.

Insulin that's inhaled through the mouth. A drug derived from lizard saliva that could promote weight loss. These are among the treatment advances that hold great promise for the 21 million Americans with diabetes. Coupled with a more familiar doctor's order — exercise! — the treatments could help more people avoid the disease's disabling and life-shortening complications.

The new type of insulin is expected to become available to the public this month. Instead of injecting the drug, diabetics will inhale a powdered form through the mouth. Dr. Martin Abrahamson, chief doctor at the Joslin Diabetes Center in Boston, is excited about the innovation. "For some people, this is going to represent the removal of yet another barrier toward improving their glucose control." (Scroll down to read recommendations about appropriate candidates for the inhalable insulin.)

Glucose control — keeping blood sugar as close to normal as possible — is vital for diabetics. Patients must prick their fingers several times a day to monitor blood-sugar levels. They must also watch their diet, exercise and take pills. And most of them ultimately must use insulin, which is typically taken by injection. Inhalable insulin "might even spare [some people] the use of injections," Abrahamson says.

That is, if they can afford it, or if their health plan will pay. Inhalable insulin is expected to cost 30 percent more than injectable insulin.

The new form of insulin isn't the only forward step in diabetes care. More and more patients with Type 2 diabetes, the most common kind, are using an injected drug called exenatide — brand name, Byetta. It's the first new type of diabetes drug in years. It stimulates natural insulin release in a different way from older drugs. Exenatide is a long-acting version of a natural hormone released in the stomach. The hormone basically primes the insulin pump: It tells the pancreas to start releasing insulin as soon as food enters the stomach. Oddly enough, exenatide is derived from the saliva of a big lizard called a Gila monster.

"One of the side effects," says Abrahamson, "is weight loss." Studies show patients lose 10 to 12 pounds on average in the first year or two of using the drug. That's apparently because it makes people feel full after eating less.

One of Abrahamson's patients, Barry Kittredge, has already shed 18 pounds since he began taking exenatide in April.

"I don't eat anywhere near what I used to," says Kittredge. "I eat so much and I just say, 'That's enough.' And I never said that before." He's currently dropped to 232 pounds and is aiming for 225. That's when his adult son, Tim, has promised to buy dad a new wardrobe.

Taking the new drug has also dropped Kittredge's cumulative blood-sugar readings — using a test called hemoglobin A-1c — into the normal range. That's pretty important for a man whose diabetes has already cost him the sight of one eye, not to mention the amputation of seven toes and serious circulation problems.

Currently, exenatide must be injected, but companies are working on new versions that don't need to be injected. Someday there may be a once-a-week form of the drug.

But it'd be a big mistake to think new drugs are all that diabetes patients need.

After years of taking pills, injecting insulin and suffering complications anyway, Barry Kittredge has "got religion," as his doctor puts it. He now believes in pills and diet ... and exercise. Jacquie Sahar, his exercise specialist at Joslin, explains that an increase in muscle mass means a metabolism that burns calories more effectively — and that burns glucose as well. And that's really the goal. After coaching Kittredge through his routine, Shahar checks his blood sugar to compare it with the reading before his workout.

"Wow, this is great," she tells him. "This is wonderful to see how exercise can affect your blood sugar. It dropped more than 40 points." That kind of instant feedback is a great motivator, she says. A daily workout could mean that a patient like Kittredge might be able to cut back on the drugs he takes for his diabetes. So old-fashioned exercise is still one of the best treatment plans around.

Q & A: Your Questions on Diabetes 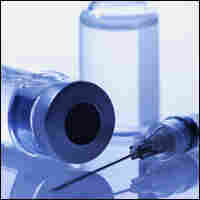 Two new treatments for diabetes have led to great excitement among those who might benefit. Inhalable insulin, which should be available this month, could mean less pain for diabetics who inject the hormone daily. And the drug exenatide, which helps promote insulin production, can lead to weight loss for some. Dr. Martin Abrahamson, medical director of the Joslin Diabetes Center in Boston, answers questions from the NPR audience, submitted after our story on the two treatments.

Type 1 diabetes is caused by destruction of the cells of the pancreas that make insulin -- the beta cells. It is what we call an autoimmune disease: the immune system thinks the beta cells are “foreign cells” and destroys them. For exenatide to work, some beta cells must be functioning. Thus, exenatide would not work in people with Type 1 diabetes and is not approved for their use.

I've been an insulin-dependent diabetic for 31 years with good control and no complications. Could I benefit from inhalable insulin? -- J.S. Orlando, Fla.

Inhaled insulin is approved for use in patients with either type 1 or type 2 diabetes. You may be a candidate, provided you do not smoke, have not smoked for 6 months and do not have any active lung disease.

No. Insulin therapy, whether injected or inhaled, usually leads to some weight gain.

Are there any negative side effects to inhalable insulin? What about lung problems? -- Nancy Williams, Cincinnati, Ohio

At this stage, we know of no long-term negative pulmonary side effects of inhaled insulin.

Are there homeopathic, naturopathic or herbal equivalents to this new inhalable insulin? Or is it even possible to treat diabetes with these alternative techniques? -- submitted by several listeners

I know of no alternative or complementary medications that can be used instead of insulin, either injected or inhaled.

Can a person with Type 2 diabetes control diabetes solely through nutrition and exercise?-- submitted by several listeners

Yes. In some cases, strict dietary control and exercise can control the diabetes.

What exercises do you recommend to assist in fighting diabetes? -- Brian Paradise, Jacksonville, Fla.

The Diabetes Prevention Program study showed that regular moderate aerobic exercise (walking at a reasonably brisk pace for 30 minutes a day, 6 days a week) and some weight loss (about 5 percent of body weight) reduced the risk for the development of Type 2 diabetes. There is no effective way to prevent Type 1 diabetes. For someone who has diabetes of either type, the same level of exercise and some weight loss would help control the disease.

We know that good control of diabetes can prevent or delay the progression of many of the complications of diabetes. For the most part, we cannot completely reverse the changes once they have occurred, but with good diabetes control and blood glucose levels as close to normal as possible, we can delay the rate of progression of nerve damage.

Do you have any suggestions for treating the pain of neuropathy, caused by circulation problems associated with diabetes? -- Judy Stearns, Gobles, Mich.

Neuropathic pain -- from tingling and numbness to shooting pains in the extremities -- can be tough to treat, but fortunately we have some medications that can be used. They include antidepressants or anti-seizure medications. The FDA has recently approved two medications for treatment of neuropathic pain: duloxetine (sold under the name Cymbalta) and pregabalin (sold as Lyrica).

There are implantable devices, and some wearable devices that look like a watch, that measure blood sugar throughout the day. Who would be a good candidate for such a device? -- submitted by several listeners

Continuous glucose monitoring devices are available for use today by patients. For the most part, we suggest that patients on insulin with wide swings in their glucose levels may be candidates, as may those who have frequent episodes of hypoglycemia, or low blood sugar, including those diabetics who don't experience warning symptoms when their sugar goes low. You should check with your doctor if you think that you might benefit from using this device.

I am a 65-year-old male with atherosclerosis. I am beginning to suspect that my arterial plaque problems are driven by my diabetes. Is there scientific evidence to support this idea? If so, should I seek more aggressive diabetes treatment? -- Mike Harris, Huntingtown, Md.

Diabetes is associated with increased risk for atherosclerosis (particularly Type 2 diabetes) -- so you are probably correct! We know that good control of diabetes together with good control of cholesterol and blood pressure and smoking cessation significantly reduce cardiovascular risk in patients with Type 2 diabetes.

Are diabetics more likely to see their blood sugar drop below normal levels if they eat too much fiber? I understand that fiber inhibits the body's absorption of glucose. Is this true? What advice would you give a diabetic regarding fiber consumption? -- Corinne Perez, Lubbock, Texas

Fiber consumption is recommended for all people, including those with diabetes. Fiber per se should not increase the risk of developing hypoglycemia. Maintaining a balance between food, exercise and medications, as well as adjusting medications if food intake or exercise changes in any way, will help avoid hypoglycemia.

My 57-year-old father was recently diagnosed with diabetes, and was placed on insulin to control it. I've been told that once on insulin, most diabetics are never able to live without it -- that controlling their diabetes through nutritional and lifestyle changes alone is no longer an option. Is this correct? -- Tiffany Tooley, Athens, Ga.

The most important thing, however, is to control the blood-sugar levels. If insulin is needed to do this, one should remain on insulin.

We recommend lifestyle changes even in patients who require insulin to control their diabetes, because managing diabetes is not just about giving medications or insulin. The dose of insulin is determined to some degree by your level of activity and what you eat. The more active you are, the better the insulin works, so you might need less insulin.

Who Can — and Can't — Use Inhalable Insulin

According to the Food and Drug Administration, inhalable insulin -- a powdered form that is taken by mouth -- is not for all diabetics. Here is an excerpt from an FDA-approved guide to the medication, discussing appropriate candidates as well as precautions.

--People who smoke or stopped smoking less than 6 months ago should not use the drug. If you start smoking or resume smoking, the FDA advises that you stop using inhalable insulin right away and to see a health-care provider right away for a different treatment.

Others who should not use inhalable insulin include:

--People who have an unstable or poorly controlled lung disease, such as asthma, chronic obstructive pulmonary disease or emphysema.

--People who are allergic to insulin or any of the inactive ingredients in inhalable insulin.

There are several precautions that the FDA recommends when using inhalable insulin:

--For adults with Type 2 diabetes, inhalable insulin may be used by itself, or with diabetes pills, or with a longer-acting insulin.

--For adults with Type 1 diabetes, inhalable insulin is always used with treatment that includes a longer-acting insulin.

The broadcast and Web version of this story originally stated that a new form of insulin could be inhaled by nasal spray. In fact, patients inhale a powdered form of insulin through the mouth.