Accessibility links
Weighing the Limits of Freedom of Expression Earlier this year, protests erupted worldwide after a Danish newspaper published caricatures of the prophet Muhammad. In the wake of the furor, experts debate the question of whether the freedom of expression must include the license to offend.

Listen to an Edited Broadcast of the Debate (53 minutes) 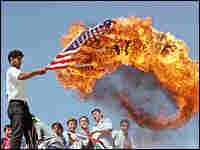 Does the freedom of expression include acts and words that are offensive to others? Chris Hondros/Getty Images hide caption

In Denmark, protests by Muslims erupted around the world after a Danish newspaper published caricatures of the prophet Muhammad. In the United States, derogatory remarks Harvard University President Larry Summers made about women in science led to his resignation. And the congressional campaign of Sen. George Allen of Virginia took a hit after he made what many found to be offensive remarks toward an ethnic group.

The highly valued freedom of expression is enshrined in the First Amendment to the U.S. Constitution. But in quiet moments, other feelings often emerge: fear that words can cause violence, that epithets can wound and harm.

On Oct. 18, six journalists, professors and activists gathered to debate the proposition, "Freedom of expression must include the right to offend." Jeffrey Toobin, senior legal analyst for CNN and a staff writer for The New Yorker, moderated the debate, which is the second in a series of Oxford-style debates called Intelligence Squared U.S. The series, produced in New York City by WNYC, is based on the successful Intelligence Squared program that began in London in 2002. 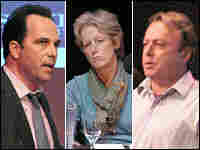 Philip Gourevitch (from left), Signe Wilkinson and Christopher Hitchens argued in support of the motion, "Freedom of expression must include the right to offend." Chris Ford hide caption

Philip Gourevitch, editor of The Paris Review and a longtime staff writer for The New Yorker says, "Once you start to say that racist or blasphemous speech is somehow or other offensive, you're immediately on the quick descent towards book-burning."

Signe Wilkinson, Pulitzer Prize-winning editorial cartoonist for the Philadelphia Daily News says you can look back to the 19th century to see example of people wanting to "stop them damn pictures, if the damn pictures hurt their feelings or the feelings of their tribe." Newcomers to our shores should be prepared to be scrutinized, as immigrants were in the past, she argued.

Christopher Hitchens, British author, journalist and literary critic, asks who is going to be the arbitrator in the voluntary censorship his opponents advocate. He says he "did not come to the United States of America 25 years ago to learn how to keep my mouth shut. I'm going to reject all offers that I change that policy, however simperingly they are put."

In the United States, there is a tradition of free thought and self-expression. There is also a tradition of different peoples' struggles to gain equality and participate meaningfully in the society. These two narratives can be in conflict, as they were in this debate.

Cartoonist Signe Wilkinson began the debate speaking in support of the motion. She gave a witty overview of the history of offensive cartoons, displaying American cartoons from the 19th century that lambasted every religion, among them Jews, Catholics, Pentecostals, Mormons and Baptists.

She noted that what is happening today isn't much different from what took place in the mid-1800s in New York City, which, like Denmark today, had poor immigrants who arrived with robed clerics and demands for separate schools. The only difference is that in New York, the immigrant group was Catholic. 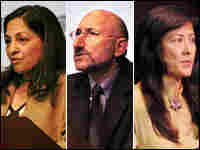 Daisy Khan, executive director of the American Society for Muslim Advancement, says the appropriate question is whether freedom of expression is absolute and limitless, or should come with some social responsibility.

David Cesarani, professor of history at Royal Holloway, University of London, says even John Stuart Mill did not believe in saying everything. He says that "human dignity, equal treatment and having a truly civil society is worth a modest, preferably voluntary degree of constraint, restraint, a kind of humility — knowing where to draw the line."

Mari Matsuda, a Georgetown University law professor and activist scholar, says, "Words are weapons. Words have consequences. I take words seriously enough to make them my vocation, and I believe that some words should remain unspoken."

"When newcomers arrive on our shores," she said, "they should be prepared to get in line to have those beliefs scrutinized."

Wilkinson said that Jews, Muslims and even people who were upset that she portrayed a teacher as fat have criticized her for her cartoons.

The offended "are left with the same option I use: free speech," she said.

"They can and do write, call, picket, boycott and draw their own cartoons. But in America, thank God and the Constitution, they can't claim special privileges and stop them damn pictures."

The central theme in the debate came early, pitting the idea of untrammeled free thought against the fears of the powerless and marginalized.

Speaking against the motion, Georgetown University law professor Mari Matsuda noted that everyone tolerates libel laws, copyright infringement laws and laws against fraud. "I've asked for 30 years why we penalize someone who calls a doctor a quack," she said, "but we won't penalize someone who says that, by race, the doctor is inherently worthless and properly subject to extermination. I haven't received an answer."

Matsuda argued that we need democracy "in order for our individual selves to thrive, and we need speech in order for democracy to thrive." But still, she said, words can be used as weapons to assault, and some words should remain unspoken.

She and others who spoke against the motion did not advocate laws that would limit speech; in a sense, they advocated communitarian values: the idea that people should censor themselves voluntarily for the good of harmony in a diverse community. When "hate speech and propaganda instill beliefs of inherent inferiority, the very things that the First Amendment is intended to protect are at risk," she said.

David Cesarani, history professor at Royal Holloway, University of London, continued this theme by noting that there are many people who are unreasonable, ill educated and angry, and there are people "who want to stir the pot and who want to incite them."

As with Matsuda, he was not asking for repealing laws that permit unfettered speech, but asking that "you think about where that boundary of prudence and wisdom should lie."

These statements provoked outrage and mockery from the other two speakers in support of the motion. Author, journalist and pundit Christopher Hitchens often interrupted the other speakers and said there was no way to have such a voluntary abrogation of speech without imprisoning the mind and the very values that are important in the United States.

Essentially, he and Philip Gourevitch, editor of The Paris Review, said the slippery slope is immediate. Gourevitch said that once you start to say that racist or blasphemous speech is offensive, "you're immediately on the quick descent towards book-burning," outlawing Huckleberry Finn or even Moby Dick because of Ahab's blasphemous words.

Gourevitch noted that Cesarani had argued that the Internet was imperiling freedom of speech because it was awash with bigotry and that "all that decent people can do is agree to reasonable limits on what can be said and set down legal markers in an attempt to preserve a democratic, civilized and tolerant society."

"Who will you appoint?" Hitchens asked the three speakers opposing the motion. "Who will be the one who says, 'I know exactly where the limits should be, I know how far you can go and I know when you've gone too far, and I'll decide that?' Who do you think, who do you know, who have you heard of, who have you read about in history to whom you'd give that job?" Clearly, he said, not anyone here.

There was a sense among the opponents of the motion that the freedom that underlies the Constitution and American culture is no longer so easy to embrace in a globalized world.

Daisy Khan, the executive director of the American Society for Muslim Advancement, emphasized that nations are so much closer to one another, and information is disseminated so rapidly that "the notion of space, of sharing space with our neighbors, needs to be negotiated and re-examined."

While no one stated it directly, the implication was that the United States, with its open space and political power, can afford a certain kind of freedom that comes less easily to the powerless and marginalized.

"When you publish something that is an immensely popular form of entertainment or when a powerful figure gives a speech, like the pope, you are using discourse to malign the way an already marginalized community is perceived," Khan said.

In these instances, she argued, "free speech" is used to oppress others — something that is un-American and goes against the foundational values of free speech.

The point isn't whether such things can or cannot be published, she said. The real issue is, "does it elevate the public discourse? Or is it simply racist, xenophobic drivel that isn't half as clever as it purports to be?"

The audience clearly was in the camp of the proponents of the motion, and most agreed with Gourevitch when he said it was presumptuous to think that anyone could regulate speech. "I think that we are at less risk taking the great risk of freedom," he said.

The audience at the debate voted once before the debate started and once during closing statements. At the beginning, a large majority favored the motion, "Freedom of expression must include the license to offend": 177 favored the motion, 25 opposed it and 24 were unsure. At the end of the debate, support of the motion increased to 201; only 39 opposed.

The Intelligence Square U.S. series will continue with six more debates. The next one will take place Nov. 29 (and will be broadcast on NPR member stations starting Dec. 6). The panel will debate the motion "A democratically-elected Hamas is still a terrorist organization."

Motion: Freedom of Expression Must Include the License to Offend

Read about the panelists participating in the second of eight Intelligence Squared U.S. debates to be aired by NPR member stations.