Accessibility links
'The Ground We Lived On': A Father's Last Days In January 2003, Adrian Leon LeBlanc was 85 years old and in the end stage of lung cancer. With his blessing, his daughter, the writer Adrian Nicole LeBlanc, documented the final months of his life in an intimate audio essay.

Listen
'The Ground We Lived On': A Father's Last Days 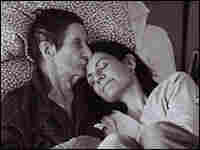 Send a note to Adrian Nicole LeBlanc and her family or tell us what you thought of the piece. 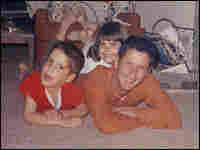 Adrian Leon LeBlanc, his son Daniel (left) and his daughter and namesake, Adrian Nicole, in the living room of their home in 1969. Eve LeBlanc hide caption

A Drive to Radiation Treatment

The U.S. Capitol and a Train

Additional interviews, photos and information about the documentary:

'The Ground We Lived On'

Published in the Sentinel and Enterprise (Fitchburg, Mass.), Tuesday, March 25, 2003.

Mr. LeBlanc was born in Lynn, the son of Albenie LeBlanc, a carpenter, and Anna (Cormier) LeBlanc, a tailor. The labor movement was the great passion of his life.

He attended Lynn Classical High School and Clark University in Worcester. As a young man during the Depression, he crossed the country hopping freight trains and eventually joined the Civilian Conservation Corps.

A delegate to the American Youth Congress, he was also a U.S. Army veteran of World War II. As a member of the 45th Infantry Division, he served in Africa and Italy, and was injured in the beachhead attacks at Anzio. He received two bronze battle stars and a Purple Heart.

A lifelong advocate for social and economic justice, Mr. LeBlanc believed fiercely in one's right to self-determination, a faith he expressed most actively in his union work. His career officially began in Gardner with the United Furniture Workers, followed by decades as an organizer and business agent for the International Chemical Workers Union.

Nature was another big love, born of childhood swims in Flagg's Pond and his birthplace's proximity to the ocean. He was a birdwatcher, an avid news reader, a fantastic dancer, dear husband and father, a contrarian and a gentle soul, a humanist.

In January 2003, Adrian Leon LeBlanc was 85 years old and in the end stage of lung cancer.

A retired union organizer and father of four, LeBlanc spent his days in his home in Leominster, Mass., a working-class town near Boston in the company of his family.

It was the same house where his daughter, writer Adrian Nicole LeBlanc, grew up. She regularly drove in from her apartment in New York City to visit her father. With his blessing, she brought along a tape recorder to document the final months of his life. In this audio essay, she shares an intimate portrait of her deep and abiding relationship with her father.

Adrian Leon LeBlanc is his daughter's namesake. She says his keen joy in observing people and the world is the reason she became a journalist.

Born on June 28, 1917, Adrian Leon was a traveler, hopping trains during the Depression, shipping off to Italy during World War II, and canvassing factories as a union organizer.

"Cancer was a journey that blindsided him," Adrian Nicole says.

Adrian Leon is propped up in a hospital bed in the living room of the house he built with his own hands. He's tucked in beneath a comforter, his body so slight he barely makes a lump under the down.

He has been married to his wife, Eve, for 50 years.

"He made her coffee every morning until he was too weak to stand," Adrian Nicole recalls.

Adrian Leon has been bedridden in the living room for a month now. His daughter says it's always been his favorite place in the house.

"Before he got sick, he'd sit here in his armchair every day. He liked to read the newspaper or stare out the picture window. He'd wave us over to share whatever he was seeing — blue jays, squirrels, the color of the maple leaves," she says.

Now his hospital bed is positioned where his armchair once sat. He has become the center of his family's attention.

"The house feels a lot like it did in my childhood, though now it's my father we're feeding, bathing, tucking in," Adrian Nicole says.

Father and daughter share as much time together as possible. He knows leg exercises are useless, but Adrian Nicole insists he do them because she can't accept that he'll never walk again. She washes his hair, one of the few pleasures that remain for him.

They talk about language: Adrian Nicole says her father's only rule with his children was if they didn't know the meaning of a word, they had to look it up.

Adrian Leon taught his daughter that language was a powerful tool. She recalls that he wished he'd gone to college because he felt it would have made him a better communicator and able to do more good in the world.

A gentle man, Adrian Leon could be fierce whenever he saw anyone mistreated. Certain things always stirred his anger: shopping malls open on Sundays when laborers needed rest; the memory of his mother, who was a tailor, sewing at their kitchen table late into the night.

"Workers were his people," Adrian Nicole says, "and he devoted his life to making their lives better."

Adrian Leon is sleeping more. He needs more morphine. His wife's attempts to get him to eat subside.

Adrian Nicole says it's becoming harder to record, but her father encourages her.

"Our voices are the ground we've lived on, so we keep talking, even about his leaving me," she says.

In his last days, his daughter sits for hours on the rug by his bed and listens to him breathe. His wife sits on a chair by his side and they try to do something that will never be complete. They say goodbye.

Adrian Nicole LeBlanc, a 2006 MacArthur Fellow, is the author of the critically acclaimed nonfiction book, Random Family: Love, Drugs, Trouble and Coming of Age in the Bronx. Her current project, Give It Up, concerns the lives of standup comedians and will be published by Random House.

"The Ground We Lived On" was written and narrated by Adrian Nicole LeBlanc. Sarah Kramer was producer, and Dave Isay was executive producer.

Special thanks to Adrian Nicole LeBlanc's family and to Arthur Giangrande. Major Funding for "The Ground We Lived On" was provided by the Corporation for Public Broadcasting, with additional support from the National Endowment for the Arts.

A NOTE ON THE STORY

In the spring of 2002, Dave Isay gave Adrian Nicole LeBlanc a recorder to tape her father, Adrian Leon LeBlanc, who was in the final stages of lung cancer. Adrian Nicole began to record him in the fall of 2002; she taped more frequently once he entered hospice care in January and continued until his death on March 21, 2003.

She brought the recorder along each time she visited him, wanting to capture their conversations and document their relationship in the final months of his life. She didn't know if she'd ever listen to the tapes again but felt it was important to preserve his voice. Her father readily agreed to be part of it.

After her father's death, LeBlanc put aside the tapes and didn't listen to them for a year and a half, until Sound Portraits approached LeBlanc again about using the tape.

Over the course of the next year, LeBlanc and producer Sarah Kramer worked together, with additional editorial input from Isay, to winnow down more than 50 hours of tape and additional narration to the 13-minute documentary The Ground We Lived On.