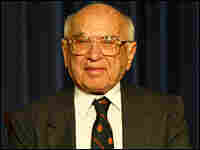 Nobel Prize winner Milton Friedman, one of the 20th century's most influential economists, died Thursday of heart failure at the age of 94.

Friedman was an empiricist, whose theories emerged from his study of the evidence, not the other way around. He also was a champion of the free market and small government. In the early 1960s, he proposed ideas such as school vouchers and a flat national tax -- ideas that have a lot of traction today.

Friedman was also incredibly influential as an adviser to governments around the world -- as well as the Nixon, Ford and Reagan administrations. He won the Nobel Prize in 1976 for his theories.

Host Alex Chadwick talks to Marketplace's Amy Scott about Friedman's contributions and impact in the world of economics. 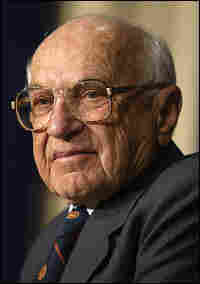 Economist Milton Friedman (seen here in 2002) received numerous recognitions during his lifetime, including the Nobel Prize and the Presidential Medal of Freedom. Brooks Kraft/Corbis hide caption 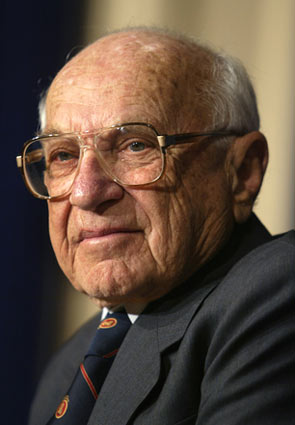 Economist Milton Friedman (seen here in 2002) received numerous recognitions during his lifetime, including the Nobel Prize and the Presidential Medal of Freedom.

Friedman on the Lasting Impact of the Fall of Communism

Milton Friedman, the economist who died Thursday, was asked in December 1999 to choose a 20th century development that he thought would endure into the 21st century. The 1976 Nobel Laureate told NPR's special correspondent Susan Stamberg that the fall of communism would have the most lasting impact. Below is an excerpt from that interview.

MILTON FRIEDMAN: Because it marked the philosophical supremacy of the idea of free markets and private enterprise over the idea of collective central planning. The collapse of communism in essence added tens and tens of millions of people to the world labor supply, and the people who were added had previously been getting very low income, but they were not unskilled. Many of them were fairly well educated.

SUSAN STAMBERG: Professor, let's take a look, though, at a major consequence of the end of the Cold War and that was the disintegration of the Soviet Union. There were consequences there that were extremely painful. Russia, the other Eastern European countries, hardships in all kinds of places. And they didn't have institutions in place to handle what they did, which was this kind of rapid deregulation, and so what you've got is corruption, their own invention of what capitalism -- a very ruthless kind of capitalism -- and a Mafia essentially running a country like Russia.

FRIEDMAN: That's certainly true about Russia. Russia is a disaster. But on the other hand, look at Poland; look at Hungary; look at the Czech Republic; look at the other former Soviet satellites. All of them are doing vastly better. Moreover, look at the other Communist country, China. China has seen a great deal of economic progress. It's certainly rather of a miracle how much in the past 10 to 15 years. And I believe that the growing role of the market in the economy will force China to open up its political system over time and to move toward a more democratic society. So taken as a whole, the one real failure in this whole business has been Russia, no question about that.

STAMBERG: Professor Friedman, let's talk some, though, about the human cost of the free market, because we all know that everything free comes with a price, and very often the price has been tremendous hardships and insecurities. I wonder what it would take to make the free-market system work and not take too heavy a toll on the extremely poor, the people at the very bottom rungs?

FRIEDMAN: Well, I can't agree with the assertions you're making. You have to compare one system with another. There's no point in comparing an actual, operating system with an ideal system that doesn't exist. I would say that, in contrary to your generalization, the free market has involved less hardship, has imposed far less of a cost than almost any alternative system. Can you compare any of the costs of the free market with the costs that were imposed by, let's say, either the Soviet Union or China?

STAMBERG: You know, lots of people are lucky to get their wisdom by sitting in your classroom over the years and reading your books. Others of us get our wisdom by talking to taxi drivers. Now this goes back to the Russian model again, and I'm sure you'll incorporate that in your answer. But I don't know how many Russian cabbies in New York have told me -- in the course of a really bumpy, pothole-filled ride -- how dreadfully tough their lives are here, having made that transition from a government which took care -- yes, in very brutal, cruel ways -- but took care of most of their human needs, and try to fight it out on the streets of the major city of capitalism.

FRIEDMAN: And why did they come there?

STAMBERG: Gold in the streets, was it?

FRIEDMAN: Yeah. Why didn't they stay in the Soviet Union?

STAMBERG: Of course, they saw more opportunities. That's true, Professor, but in terms of...

FRIEDMAN: Do they regret having come?

STAMBERG: Well, I think they did. I'm not saying...

FRIEDMAN: Don't you think that the most meaningful vote is a vote with your feet?

STAMBERG: So you're saying pack up and go back if it's so tough for you here?

FRIEDMAN: Well, how many have done so?... Don't misunderstand me. I'm saying if you really want to know what they really believe about the relative merits of the two systems, see what they do, not what they say. And what they do is to stay here. They don't go back. I think of my own family. My parents came here from Europe at the age of 14 and 16. And they had a hard time, a very difficult time, but it opened up a world of opportunity for them. And the same thing with these cab drivers whom you're talking about who are bitching about it. Look at what they do, not what they say.